HISTORY’S ‘SIX’ Is About To Get A Lot More Grim. Here’s Why

SEAL Team Six, the Navy’s most hyped and dramatized unit are getting a second run in HISTORY’s military drama, SIX.... 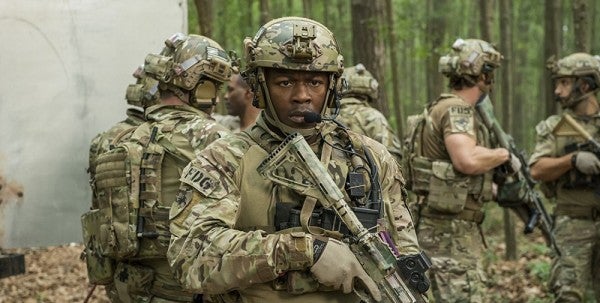 SEAL Team Six, the Navy’s most hyped and dramatized unit are getting a second run in HISTORY’s military drama, SIX.

The ten-episode second season is set to air this Memorial Day, and picks up where it left off, with the members of Team Six coming to grips with the news that their former team leader was shot, just days after being rescued from captivity at the hands of Islamic extremists. (Here’s a quick recap of season one.)

Though the second season will have a few new faces — Olivia Munn plays a CIA officer named Gina Cline — some of the characters who sat on the periphery in season one will be getting more time in the limelight.

We had a chance to speak with actor Edwin Hodge, Red Dawn, The Purge, who plays Robert Chase in SIX, about what’s in store next season; where his character’s heading; and what threats await the team — at home, and abroad.

“He’s on this journey of self discovery,” Hodge told Task & Purpose “You don’t really know who he is in the first season and in the second season we kind of dig a little bit deeper into the person that he is, and the person he’s becoming.”

Chase, an Ivy League-educated SEAL is someone “who’s probably a bit naive” Hodge said, “and he’s thrown into this situation where he has to make a choice.”

That choice is to help his fellow SEALs cover up the killing of an unarmed American citizen turned-jihadist, by the team’s former leader, Rip Taggart, played by Walton Goggins of Justified and The Shield fame. Chase backs his buddies, and “in doing so, he finds a love for the men that he is protecting and that are protecting him.”

But it comes at a price.

“Without giving too much away, he decides to take what may be perceived as a darker path,” Hodge told T&P.; “He begins to discover himself and realizes that maybe there’s this animal inside of him that he’s never explored. In doing so, we take this very interesting journey into the mind of who Chase is, and who he’s decided to become.”

It’s unclear what this “darker path” will be, but seeing as the show’s first episode started with the killing of an unarmed prisoner, it’s anyone’s guess.

The plot for season one revolves around rescuing Taggart, who after being forced off the team by his fellow SEALs in the wake of the killing, begins working as a private security contractor and is captured by Boko Haram in Nigeria. He’s eventually traded from Boko Haram to the brother of the man he killed in the show’s pilot episode — who’s now a global terrorist mastermind. And if that doesn’t sound a little far-fetched, bear in mind that his former teammates are tasked with rescuing their once-ousted, now-captured leader. But, it’s a drama, and they’re meant to be, well, dramatic.

One thing the first season did exceptionally well — in addition to incorporating the thorough technical work of the special operations forces vets on set — was to ground these larger-than-life characters in relatable moral dilemmas. And it sounds like season two is doubling down on that formula: Frenetic and artfully shot gunplay, juxtaposed with emotionally taxing moments at home.

“This is a world that they now have to normalize for themselves,” Hodge, himself the son of two Marine parents, told T&P.; “They literally will get a mission, they’re gone in an hour, they’re away for a week, maybe two, then they’re back home in their kitchen with their wives and children making pancakes in the morning.”

“That duality, and how it could affect someone, is insane,” Hodge continued. “What these men and women have to go through when they’re away, in some ways becomes their new reality. That is their life. Their home life in a sense becomes their alternate reality. This is the life they come to when they’re waiting for the real job, the real duty. The real purpose they have in life, is war, in a sense.”

Season two of SIX premieres on HISTORY on Memorial Day, May 28 at 10/9c.