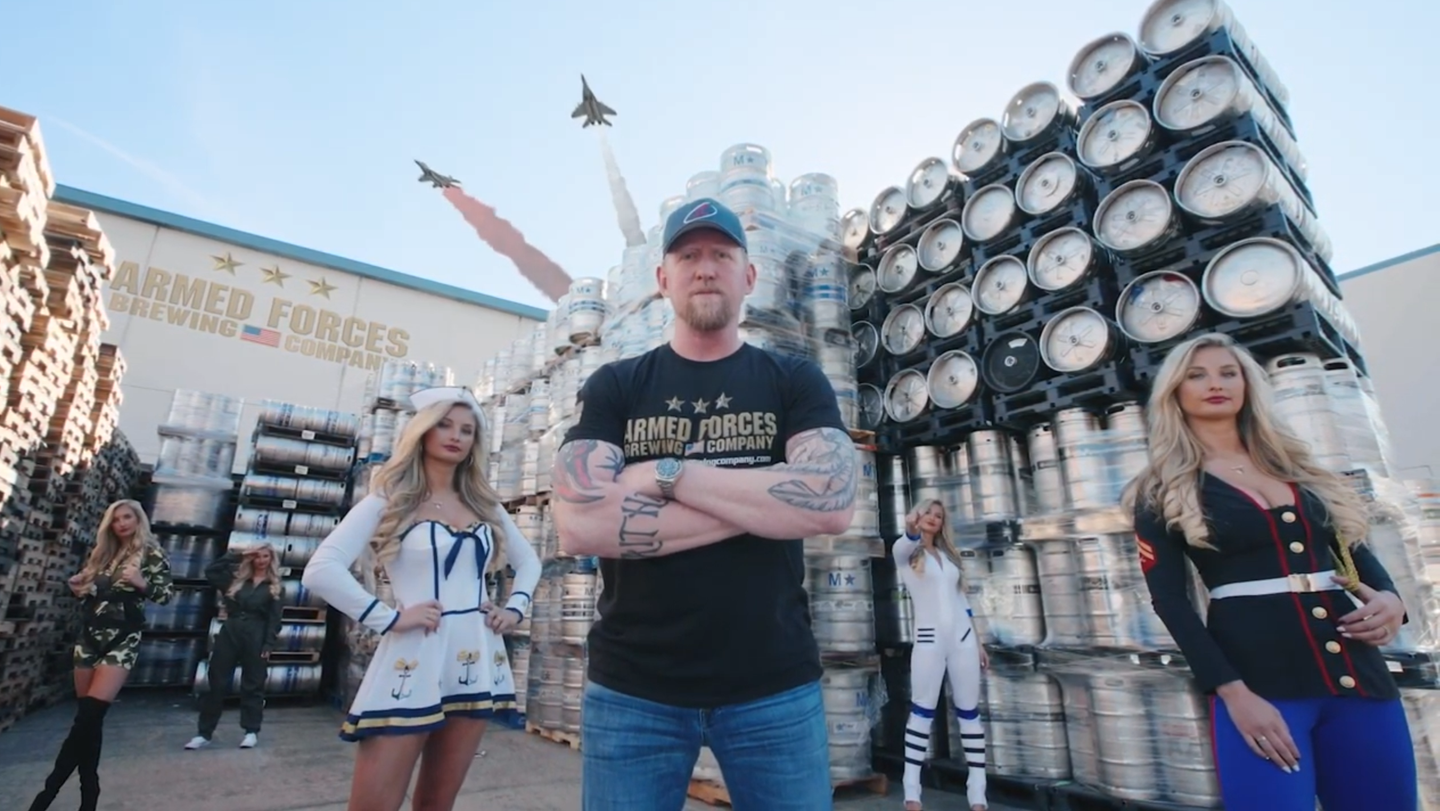 Robert O’Neill, the former Navy SEAL who is widely credited with firing the shots that killed Osama Bin Laden, has a new mission: To get you to invest in a beer company. Specifically, this one.

On Thursday, a commercial for Armed Forces Brewing Company began making the rounds on social media after the company uploaded the full promotional video to YouTube featuring the SEAL Team Six veteran as he shoots bad guys off-screen, mocks beer snobs, and makes a last-minute reference to that time he got into a Twitter fight with an airline for refusing to wear a mask.

“This beer is for everybody to drink, it’s not some pretentious asshole beer for some slackster or coffee-house misanthrope,” O’Neill says in the clip as he pulls a Spock and knocks out a guy wearing flannel because he likes hoppy beers. The advertisement itself is pretty standard fare these days, and it’s similar to commercials from veteran-run businesses that are already out there, which is to say that it plays like a military-grade and mega-moto version of Dollar Shave Club’s 2012 viral hit. The video also includes a CGI flyover from a trio of aircraft — that look a lot like Russian MiG-29s — and the same woman appears to have been cloned several times over in different service-specific outfits.

But honestly, I don’t really give a shit about the commercial, and I don’t think you should either. Instead, let’s talk about the beer and the breweries involved, which is probably a good idea since the whole goal of the clip is to get you to invest in the venture.

Armed Forces Brewing Company has three brands under its masthead, each tailored to different military branches and in different stages of development. There’s Seawolf Brewing for the Navy, Coast Guard, and Marine Corps; Soldier Brewing for the Army, and Airmen Brewing for the Air Force and Space Force. According to their site, their beer is only available at locations in Maryland, Virginia, and Rhode Island and appears to be for sale at some military exchanges and at certain retailers. Additionally, the website only lists two beers at present: an IPA called Special Hops, and Cat Shot, a lager.

The company’s investment page pledges to have at least 70% of its workforce be military veterans. The website lists O’Neill as its brand ambassador and notes that he also serves on the company’s board of directors. The company’s onsite roster lists a number of other military veterans, from fellow Navy SEALs to former Army Special Forces.

“I’m proud to work with some great Americans making great American beer,” O’Neill said in a July 6 statement. “Our beers pay tribute to the men and women of the greatest military in the world, and I am thrilled that anyone and everyone can own part of this patriotic company at this early stage alongside me.”

You can “enlist” by investing $200 to $499, at which point you’ll get a sticker, a challenge coin, an invitation to an annual event, a 5% discount at their online store and a few other benefits. From there the investments jump up quite a bit, as do the titles. There’s “Bootcamp” which comes in between $500-$999 and “Brigade” at $1,000-$4,999, and then it just keeps climbing. You can read a more detailed breakdown of the perks, here.

Now, I have to circle back because at first when I saw the “enlist” option I was irritated, because it felt like one blatant attempt at over-the-top military branding too many. However, upon closer review, I realize it’s spot on. I mean, think about it. That’s not unlike enlisting: You get a challenge coin (because of course you do), an invitation to an annual event (like the birthday ball), a discount at a very specific set of retailers (the PX), and you might not get exactly what you expected out of it. So, hats off to Armed Forces Brewing for that one. I mean, I won’t be shelling out that much cash for a sticker and a few minor benefits, but I’m sure someone might.