The man behind Milk & Honey wanted a meticulously crafted drink and experience, not rowdy pomp and circumstance. 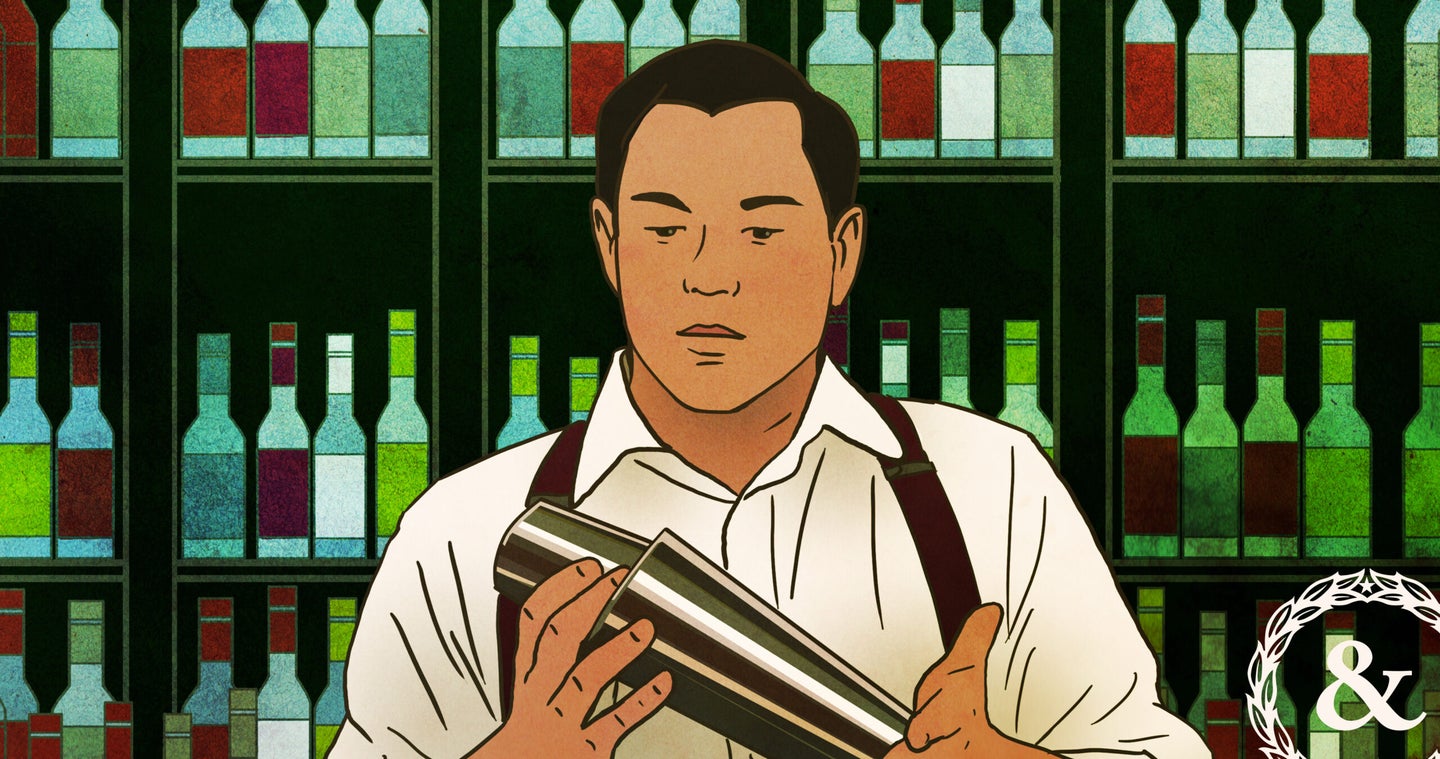 If you’ve enjoyed a Gold Rush or a Cosmonaut while out drinking, or sat at some of the best cocktail bars in the country where the focus is on the drinks rather than the nightlife, that’s in part thanks to the legacy of a veteran. Specifically, Sasha Petraske.

Petraske was the owner and bartender behind Milk & Honey, a seminal New York City bar that opened New Year’s Eve 1999. Milk & Honey’s approach to cocktails helped to revolutionize the cocktail world and influenced dozens of the top bars around the country today. Petraske was known for his focus on simplicity and his passion for the 1920s, both jazz and retro style. He was known for his love of suspenders and vintage suits. He was meticulous, in his habits and in his requirements for a proper cocktail.  When he died in 2015 at the age of 42 from a heart attack, it sent shockwaves through the bar and dining world.

But before he transformed the cocktail scene and founded Milk & Honey, he served in the Army.

Petraske was born in 1973 to communist parents living in Manhattan’s Greenwich Village, which gave him both a belief in social justice and sympathy for workers. He dropped out of high school, traveled for some time, and ended up in California to be with a woman, according to Robert Simonson in his book A Proper Drink. His widow, Georgette Moger-Petraske said the move west was partly for a job, partly out of aimlessness. Regardless, Petraske’s romance and job hunt in California failed and circumstances didn’t improve, so he ultimately decided to join the military. He signed up with the Army in late 1994.

“He always said he grew up in a house without many rules, so he joined the Army because he wanted a sense of structure,” according to Georgette Moger-Petraske, Sasha’s widow, who after his death finished the book they co-wrote together, Regarding Cocktails.

Joining after the Cold War and the Gulf War, Petraske found himself in the Army in the midst of a reorganization. He ended up at Fort Benning, Georgia. He trained as a Ranger, ultimately assigned to 2nd Battalion, 75th Ranger Regiment. While in the service he didn’t deploy. He ultimately served for two years but decided he needed to get out, that it wasn’t for him after all.

“He did have a bit of a frustration with serving because he felt he wasn’t serving,” Moger-Petraske said. “He felt it was a purgatory of basic training.”

Getting out was a different matter. It was the time of Don’t Ask, Don’t Tell, so Petraske claimed that he was gay as a way to get out of the military early.

Don’t Ask Don’t Tell was implemented in 1994, at the time seen as a way to let LGBTQ Americans serve, if not openly. However, it didn’t mean LGBTQ troops weren’t discriminated against or punished for their sexuality: In the 17 years the policy was in effect, more than 13,000 service members were discharged under it.

Don’t Ask Don’t Tell was repealed in 2011, but for many veterans whose careers were cut short by it, the policy left them bitter. That Petraske would use this policy to exit the military at a time when others who wished to serve were being forced out somewhat complicates his legacy as a vet-turned-trailblazing bartender. Though as Petraske told Simonson in A Proper Drink: “They were not sad to see me go.”

Out of the service in late 1996 and back in New York City, Petraske ended up in hospitality. He learned the trade and wanted to open a cafe that fit his own interests. The idea was to do bar work to save up for the cafe, but opportunities emerged. He found an ad for a commercial space renting for $800 a month. It had previously been a mahjong parlor, and it turned out the space belonged to someone he knew growing up. Petraske took a gamble and opened Milk & Honey the last day of 1999.

In the late 1990s, the cocktail world was, for the most part, not particularly great. This was the era of pre-made mixes and sugary concoctions — think Long Island Ice Teas, saccharine Appletinis, and Cosmopolitans. A pour of alcohol might be an exact measurement, but mixers might be eyeballed or done just to fill a glass. Bars were louder and rowdier, especially in New York City. But some people wanted a change.

Petraske wasn’t alone in this endeavor. Other bartenders at the time such as Dale DeGroff and Julie Reiner were helping to reshape how drinks were crafted, revisiting classic pre-Prohibition cocktails that had fallen out of favor and using fresh ingredients but Petraske had particular styles that helped. He made sure juices were freshly squeezed, set up a mis en place (the array of necessary fruits, syrups and other pieces needed for service) with crushed ice and fruit and garnishes, made his own ice in-house (allowing for specialized sizes and needs depending on the drink) and emphasized making drinks by the round, rather than serving each individually, according to Eric Alperin, who trained under Petraske in New York City and eventually opened Los Angeles’ The Varnish with him. There was a meticulousness to the drink making, but also an attention to the guest’s experience.

“A chef would tell you the same. It’s about those 15 seconds you have with a guest, when you’re putting a fresh drink in front of them on a clean napkin with the right washline,” Alperin said. “We can’t take that lightly.”

Petraske also pioneered what became a standard in cocktail bars: the “bartender’s choice.” Did a customer have a certain spirit in mind? Did they want something shaken or stirred? After a few questions, the bartender would present a drink for the guest.

What Milk & Honey understood was that very small tweaks can lead to very big impacts on drinks, according to Leandro DiMonriva, a Los Angeles-based bartender and host of the bartending and cocktail history show The Educated Barfly.

“They continually riff and riff on the drinks,” he told Task & Purpose. “The Penicillin, that’s a play on a Gold Rush, it comes from Milk & Honey in 2003. Well, a Gold Rush is a Bee’s Knees with whiskey. A Penicillin is a Gold Rush but instead of honey syrup, you split that with ginger syrup and you use Scotch.”

The Milk & Honey team, either directly or through people they trained, helped open more than a dozen bars around the United States, DiMonriva said, with many of their drinks becoming modern classics.

Many of these played on formulas and specs of cocktails that worked, but tried new ingredients to play with flavors. A cocktail pattern can be modified or altered, even if it changes out pieces. That’s how the Penicillin plays on the Gold Rush or how the Paper Plane technically is a riff on the Last Word by using four elements of equal parts 3/4s of an ounce, even though it shares no ingredients with its inspiration. These drinks ended up hits and now can be found at bars across the country.

After opening, Milk & Honey soon took off. Despite the lack of a sign and an unlisted number, people found their way to it, so much so that the staff had to start a reservation-only approach. The bar unintentionally became a classic speakeasy.

Milk & Honey also reflected Petraske’s own style and love for the 1920s. It was decorated in the style of that era, and Petraske was dressed like a figure from the Jazz Age.

“In the summer he’d wear a newsboy cap and in the winter a fedora,” Moger-Petraske said. Glassware was specific and done to accurately match what was used before and during Prohibition. There were strict rules of conduct for patrons, to try and avoid a rowdy crowd. They would be on plaques in the bar, and stolen from time to time. Petraske also kept a clear guide to who could get a free drink from staff (parents and romantic partners were okay, as were teachers, firefighters, and active-duty military; politicians, celebrities and liquor reps were out of luck). From Milk & Honey, other bars followed: Little Branch, The Varnish, Dutch Kills, Middle Branch, and more.

Now, the idea of a suspenders-wearing bartender in a speakeasy might sound kitsch or like a gimmick, but those who knew Petraske said he wasn’t trying to put on airs or drum up a vibe. The man was shy and was simply trying to maintain a certain level of quality, both in the drinks he made and the experience bar guests got.

“He was really respectful, really egalitarian, very much a gentleman,” Alperin said. “It wasn’t a put-on. People would say ‘Oh you love the ‘20s huh,” but that was how Sasha was.”

“The thing that I think a lot of people don’t really get about Sasha Petraske and his impact is that he took what was happening in the cocktail world and simplified it,” DiMonriva said. “It was based on his own aesthetic of simplicity and elegance. A lot of things at the time that were over-thought and complicated, he was trying to reinvent. He was going to deconstruct a drink, going back to the old texts on how they were made.”

Those who worked with Petraske and knew him said he didn’t discuss his time in the military often, but some of his experience bled into his work and attitude.

“I think that experience [of training to be a Ranger and being in the military] would have to inform you,” Alperin said. Petraske would bring up his service from time to time, but not in too much detail. Some parts of his lessons from the Army were more evident though, Moger-Petraske said — his strict posture and habit of making the bed every morning without fail came from his service.

Petraske also abhorred violence, to the extent he wouldn’t allow any cocktails to be named after anything having to do with it. One bartender crafted a drink called a 38 Special, and it took a lot of time to convince Petraske it wasn’t named for a gun (instead the name comes from multiple ingredients using only 3/8ths of an ounce).

That was all cut short on Aug. 21, 2015, when Sasha Petraske unexpectedly suffered a heart attack. At the time he was exploring a new location for Milk & Honey (its second location closed due to outside issues with the building) and writing a book. Moger-Petraske finished what became Regarding Cocktails, which includes recipes as well as his rules for patrons.

His friends and colleagues still miss him and honor him. Every Aug. 31, there’s a toast of daquiris, one of his favorite drinks, in his memory. Those who knew him say there are a few things they remember — Moger-Petraske mentioned mornings spent reading with him, or drinking Collins and eating oysters. For Alperin, he remembers Petraske happily picking limes while walking, not driving through Los Angeles to make gin and tonics.

The old Milk & Honey space is still in operation, as a different bar. One of his colleagues, Sam Ross, runs Attaboy out of it; the bar was named the Best Bar in North America in this year’s edition of the 50 Best Bars list.

Update: Oct. 11, 2022: This has been updated to reflect differing accounts of why Petraske went to California.