We decided to pull in some of the best military series from the last two decades that have stood the test of time, along with some new additions to the genre that you may have missed. 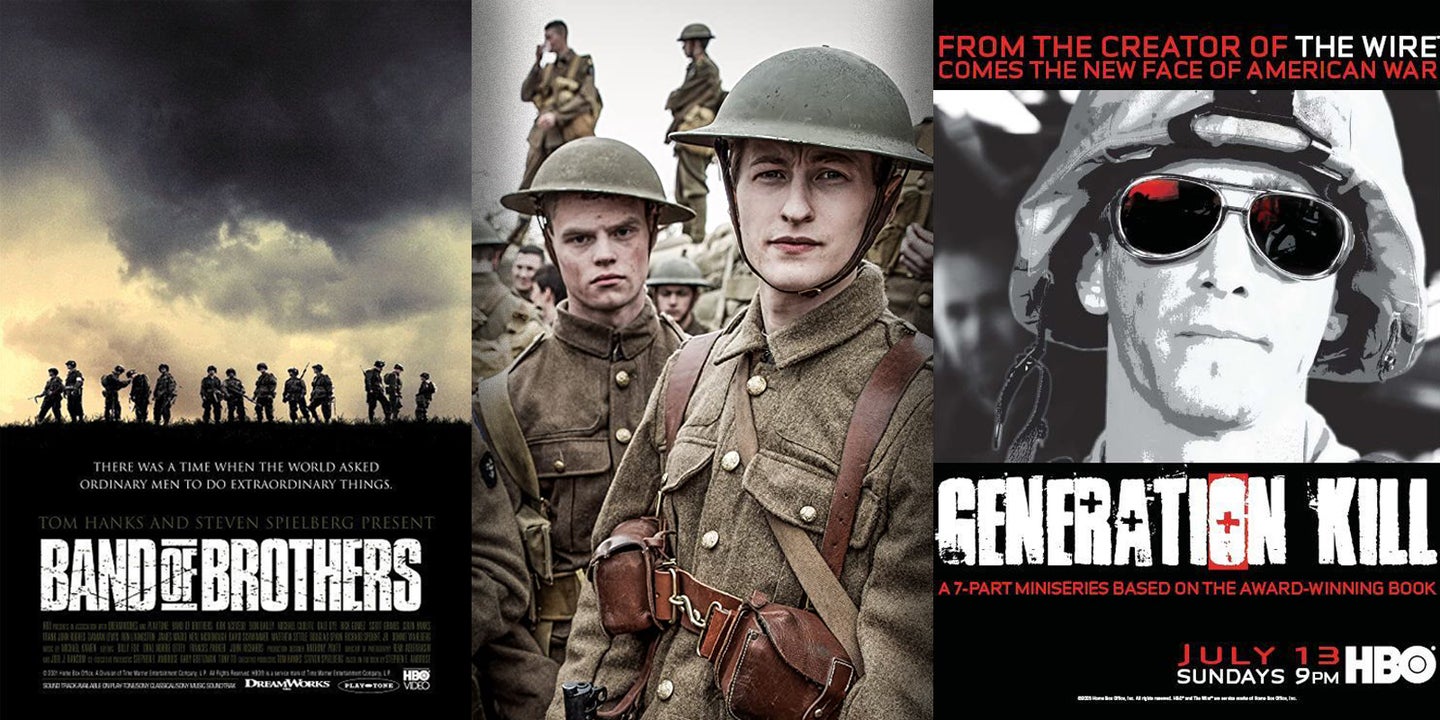 That's right, folks: another list of things to watch as while stuck indoors bingeing movies and miniseries as we actively avoid working from home amidst the novel coronavirus (COVID-19) pandemic.

Over the years, there's been no shortage of military-themed TV series, a disappointing number of which have felt like little more than focus-grouped procedurals where everyone's an operator, all the uniforms are jacked up, and the plot-points don't matter because they're made up — kinda like Who's Line Is It Anyway with high and tights and M4s but less funny, even when they're supposed to be comedies.

Now, before you let that turn you off, there's a caveat: This isn't a list of those shows. Instead, we here at Task & Purpose decided to pull in some of the best military series from the last two decades that have stood the test of time, along with some new additions to the genre that you may have missed.

Here are 10 military shows — and one honorable mention — that are definitely worth watching while you're stuck inside.

The World War I miniseries, available on Amazon Prime, follows a group of childhood friends who enlist together in the Australian and New Zealand Army Corps and chronicles their service during the bloody Gallipoli Campaign. In terms of storytelling and character development, think of it like Band of Brothers, but set in the World War I.

And on that note:

Now, there's a good chance most of you are familiar with HBO's World War II classic, but if you're not, here's a not-so-subtle hint that you need to carve out the time to watch it.

Produced by Steven Spielberg and Tom Hanks, the award-winning series is available on HBO and follows the men of “Easy” Company, 2nd Battalion, 506th Parachute Infantry Regiment, 101st Airborne Division as they land in Normandy and make their way through France, survive the Battle of the Bulge, and round out the war by sipping Hitler's wine from atop the Eagle's Nest in Germany.

One of the series' greatest strengths — among its many accomplishments — was that it kept a tight focus on a core group of characters throughout the war, with each episode told from the perspective of a different member of the company. In doing so, the show offered an authentic view of what the war in Europe was like for the men who fought it.

This BBC World War I miniseries is broken into three distinct episodes. The first takes place just weeks after Britain entered the war, and follows soldiers with the Royal Fusilliers as they dig in outside the Belgian town of Mons in anticipation of the German army, which they believe is weeks away. The second and third episodes focus on different units and times in the war — one follows a soldier in the trenches during the Somme Offensive, the other puts you inside a tank at the Battle of Amiens. On the whole, the series, which can be purchased through Amazon Prime, is an unforgiving sampler platter of World War I combat.

Based on Joseph Heller's legendary 1961 satire, Hulu's Catch-22 is not a heroic war story; in fact, it's about a man who does everything in his power to avoid being a hero. The six-part miniseries offers up some much-needed humor with a heavy dose of belligerence in the face of good order and discipline, and plenty of cynicism over bureaucratic red tape.

Based on the non-fiction book by Rolling Stone reporter Evan Wright, HBO's Generation Kill takes you on a brutal, dusty, clusterfuck-riddled odyssey as it follows the Marines of 1st Reconnaissance Battalion during the 2003 invasion of Iraq. It's also one of the greatest, and most accurate, portrayals of Marine infantrymen in the age of the Global War on Terror and an endless source of humor for all who have been knife-handed and devil-dogged by a sergeant major over the length of their “moostash harrs.”

In HBO's Band of Brothers, the camaraderie between the men of Easy Company served as a counterbalance to all the violence, and random death. In The Pacific, no amount of friendship and banter can mask just how brutal and unforgiving combat was for those who fought in the island-hopping campaign of World War II, and for that reason alone it's deserving of your time.

Unlike its sister series, which closely follows one infantry company throughout the war, The Pacific shifts between three distinct character arcs — Eugene Sledge, Robert Leckie, and John Basilone — as their respective units fight from Guadalcanal, to Peleliu, Okinawa, and Iwo Jima.

Starring Bill Hader as a hitman who decides to give up a life of murder for hire in favor of a (far less profitable) career as an actor, HBO's Barry may not be an outright military television series, but it's unexpectedly authentic with regards to the main character's service. It's the little things, like how Hader's character, Barry Berkman, has an “I love me wall” with his awards, Marine Corps flag, and other memorabilia in his sad apartment where he sits in front of an Xbox playing video games. Then there's the way he switches from “civilian Barry” to “Marine Barry” when he meets up with some other ex-Marines. For anyone who's ever invited their vet buddies to a party after leaving the military, this will be immediately relatable, as will the reactions from civilian friends when they say “I had no idea you swore so much.”

Amazon Prime's scientifically accurate sci-fi original series is basically the Cold War in space, and it's got a military vibe that's pretty hard to ignore.

The show takes place at a time when humanity has colonized the solar system, with Earth united under a single global government. Mars, having seceded years before, is an advanced militaristic nation that's hellbent on terraforming their dusty red planet and maintaining independence from Earth. Caught in the middle of this are the belters — the people who live on asteroids, mining them for the valuable resources that Earth and Mars rely on. And then there's the much-maligned OPA, terrorists to some but freedom fighters in the eyes of the belters who spend their lives in zero gravity, surviving on recycled air and water, as they toil away for the “inners” — a pejorative term for those who live on Earth and Mars.

And, in the midst of all that, mankind makes first contact with aliens — a wildly destructive cellular organism called the protomolecule — and a new arms race is set in motion. So yeah, there's a lot to catch up on given that they're already filming the fifth season.

The sequel to the 1970s science fiction series, Battlestar Gallactica takes place in an alternate reality set far in the future as humanity narrowly avoids extinction at the hands of the Cylons, a race of AI machines that went rogue and turned on mankind. The survivors drift through space, guarded by the last functioning human warship, called a Battlestar.

If you're looking for some awesome skirmishes between dueling spaceships and swarms of fighters, then Battlestar Gallactica has you covered — the fight scenes basically play out like World War II naval battles, just in the vacuum of space. The first several seasons are available for stream online for free via the SyFy channel.

Fresh off his action hero debut in 13 Hours, John Krasinski stars as the titular Jack Ryan in this Amazon Prime series, based off the recurring character from Tom Clancy's spy thrillers. A Marine veteran who survived a helicopter crash before being medically discharged from the Corps, Ryan now spends his days behind a desk as an intelligence analyst for the CIA. At least, that's how the series starts, but within 30 minutes he's up to his eyeballs in interrogations, gunfights, and bomb plots as he tracks down the mysterious leader of a global terrorist network.

If you're looking for a spy thriller that's heavy on action and banter between Krasinksi and his co-star Wendell Pierce (The Wire), then Jack Ryan is a safe bet.

As Task & Purpose previously noted there are two military episodes in this anthology of animated shorts on Netflix that really stand out: Shape-Shifters and Lucky 13.

Set in an alternate reality, Shape-Shifters follows two Marines deployed to Afghanistan. In many ways, they're your average grunts: They patrol arid roads searching for IEDs with their feet, take shit from SNCOs at the chow hall, and question why they're out in the desert the first place. Except these two aren't just devil dogs in name, they're werewolves. And yes, the Taliban has werewolves, too.

In Lucky 13, we follow a rookie pilot in some futuristic space-faring Marine Corps who gets assigned to fly a dropship with the ominous name Lucky 13. And for its part, the ship lives up to the superstitious hype: Its last two crews died, while the spacecraft remained intact, a miraculous (or sinister) feat, depending on which way you look at it. Whether or not Lucky 13's unlucky streak will hold is something you'll just have to find out by watching.

Did you like this TV streaming guide? Do you think we missed something? We'd like to hear your thoughts and any recommendations you have. Drop the author of this article a line at james@taskandpurpose.com.