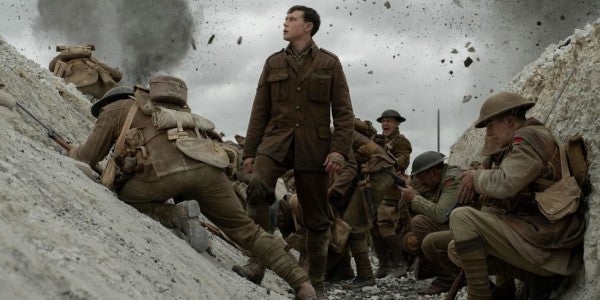 Movie critics everywhere are wetting their pants over 1917, a taut portrayal of World War I combat that Task & Purpose praised as the best war movie in years. For many Americans, the film will be their first on-screen exposure to the horrors of World War I, which is largely overshadowed in the American zeitgeist by the triumph of World War II. But that doesn't mean it has to be the last time state-side movie-goers step foot into the trenches.

To begin to understand the experience of World War I, as well as the similarities between soldiers that extend across all wars and eras, the Task & Purpose staff put together a list of the most visceral, engaging and informative depictions of The Great War that we know of.

Here are 7 World War I movies you should check out.

This seven-part Australian TV drama follows a small squad of soldiers with the Australian and New Zealand Army Corps (ANZAC) throughout the Gallipoli Campaign of World War I. In terms of style, it's a beautifully shot and historically accurate period piece, but the narrative structure is what really makes it worth watching. Because the show focuses on a tight-knit infantry unit, it feels very similar to HBO's acclaimed series, Band of Brothers; as the war wages on, you come to care deeply about the main characters, and like their brothers-in-arms on screen, you too mourn their loss when they're gone.

Gallipoli can be streamed on Amazon Prime Video.

This critically acclaimed documentary by Lord of the Rings director Peter Jackson is a must-see. As Task & Purpose previously reported, the project was four years in the making, and paints a vivid picture of the Great War by putting a premium on emotional authenticity as it follows British soldiers assigned to the Western Front between 1914 and 1918.

They Shall Not Grow Old can be streamed on HBO.

Before Full Metal Jacket and Dr. Strangelove, Stanley Kubrick directed Paths of Glory, which stars Kirk Douglas as a French colonel on the Western Front who tries to defend three of his soldiers in court after they are arrested on false charges of cowardice by a general attempting to save face. The film portrays the claustrophobia of trench warfare and the opulence of megalomanical generals in vivid, terrifying contrast.

Paths of Glory is available on most video streaming platforms.

What the hell was World War I even about? Why did it start and how do all the events depicted in these movies link together? While this 10-part British documentary isn't exactly fast-paced, it does do an excellent job explaining the origins of the war and the experience of fighting it. The soundtrack is spot-on and the film pairs archival footage with circa-2005 clips of the same cities and fields where the events of WWI took place, which has a really convincing effect of making the century-old conflict come alive.

The First World War is available for free on YouTube.

While The Lost Battalion is a made-for-TV World War I flick, that's no reason not to give it a look. The A&E drama is based on the exploits of the nine companies with the U.S. Army's 77th Infantry Division, who endured a nearly week-long siege against a numerically superior German force. Cut off and surrounded in the Argonne Forest, some 500 American soldiers faced food, ration, medical, and ammunition shortages; suffered through ceaseless artillery barrages (from friend and foe alike). Yet they held their ground, and paved the way for Allied forces to break the German lines. By the end of the battle just 200 men with the so-called “Lost Battalion” returned to the Allied lines, the rest were missing, dead, or captured.

A lot of Americans students first encounter 'All Quiet On The Western Front' in the classroom, but the on-screen version captures the desolation of trench warfare almost as much as Erich Maria Remarque's original novel infamously did.

All Quiet on the Western Front can be streamed on YouTube.

Besides being an insanely long epic with questionable historical accuracy, Lawrence of Arabia is also a captivating look at what WWI was like outside of the mud-filled trenches of the Western Front. Cavalry charges, railway sabotage and sweeping desert panoramas fill up this tome of a film, which acclaimed director Steven Spielbierg once called a “miracle.”

Lawrence of Arabia is available on most streaming platforms.