The Chainsaw Bayonet Of Your Dreams Just Got An Upgrade

The firearms industry in the United States raked in more than $13.5 billion in 2015 thanks to the growing cornucopia of unusual... 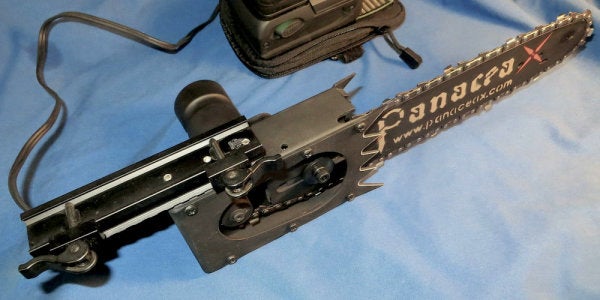 The firearms industry in the United States raked in more than $13.5 billion in 2015 thanks to the growing cornucopia of unusual firearms accessories, few of which capture that perfect fusion of tactical zeal and American ingenuity than the extremely real chainsaw bayonet. Now, the company behind the original weaponized chainsaw have a new addition for your arsenal.

Robert Weir, the brains behind the original DoubleStar Zombie X Chainsaw Bayonet that first debuted at SHOT Show back in 2012, recently unveiled an updated version of the tactical chainsaw. It's called The Killsaw, and it looks exactly like it sounds.

Featuring the same 10-inch chainsaw blade as the original Zombie X model, the $800 bayonet attaches to the standard Picatinny rail and offers improved power and battery life through an external battery pack mounted on the stock. The update ostensibly offers more punch with better weight and balance for improved hacking and slashing.

Ironically, we have USA Today to thank for the Killsaw. Back in November 2017, after disgraced airman Devin P. Kelley’s massacre of the First Baptist Church of Sutherland Springs, Texas, the newspaper put out an odd video detaining some attachments for the AR-style rifle that Kelley used during the attack — including a chainsaw bayonet.

A look at the gun used in the Texas church shooting. https://t.co/xdxIf5fR77 pic.twitter.com/sUY1mCCLZC

The video generated as much interest in the chainsaw bayonet as it did ridicule of USA Today. And according to Guns.com, the sudden spike in attention spurred Weir to found a brand-new company, Panacea X, specifically to help streamline the production process around his baby. Guns.com reports:

But when the USA Today article appeared on Nov. 8, 2017, his website traffic exploded. Unfortunately, he wasn’t prepared. Until then, the chainsaw bayonet was an underground niche item that sold a few units every month. Suddenly orders poured in and he wasn’t able to keep up. He sold what he had in stock and scrambled to produce new products. As of January, he was back-ordered two months.

His success, and free marketing thanks to USA Today, saw Weir back at SHOT Show in January. He was announcing a new improved weaponized chainsaw that would be released in late spring.

More power, better balance, and more bite — finally, your dreams of some aggressive Gears Of War cosplay are almost a reality. Pick up The Killsaw here.