Freedom in 9mm: the 1911 pistol forged with pieces of the Statue Of Liberty

Few things say freedom quite like the Statue of Liberty, so few pistols can be more patriotic than one made from a chunk of the United States' most iconic symbol 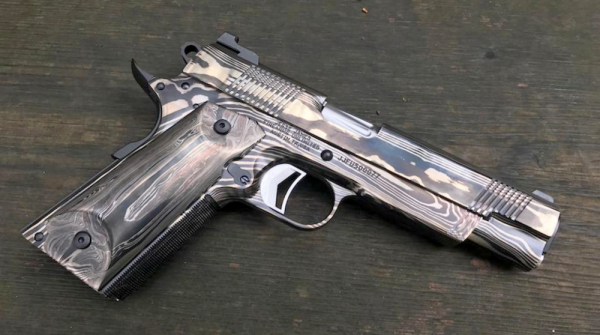 Few things say freedom quite like the Statue of Liberty, so few pistols can be more patriotic than one made from a chunk of the United States' most iconic symbol.

Called the “Lady Liberty” Full Damascus Cisco, this 1911 is forged by Jesse James of West Coast Choppers and “The Celebrity Apprentice 2″ fame. The handgun is valued at $85,000, and for good reason: Crafting the “Lady Liberty” took a full year and nearly 500 hours of labor, according to Forbes, which spoke with James about this star-spangled handgun.

The material is from a piece of the handrail around the Statue of Liberty's torch, and it came to James through a source involved in the restoration.

“It was just laying there, so he grabbed it, and it ended up in my hands.” James told Forbes.

Only three firearms were made with the statue material, and as of James' interview with Forbes in February, two have already been sold. The pistol is just one of many recent creations to come out of James' Texas-based company Jesse James Firearms Unlimited, which he launched in 2013.

The pistol is forged with “the DNA of America's biggest symbol of freedom,” James told Forbes. Freedom isn't free — and it sure isn't cheap, either.

SEE ALSO: These Heaven-Sent Hand Cannons Cost $4.5 Million And Are Made Of Meteorite