The Next Generation Grenade Has Two Deadly Modes

We may earn revenue from the products available on this page and participate in affiliate programs.   The Army is... 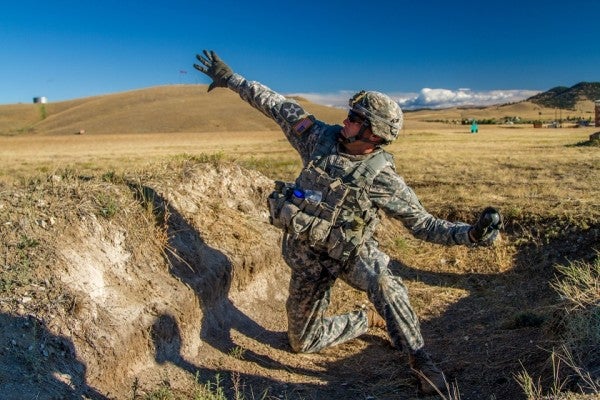 The Army is designing a new lethal hand grenade that can switched from fragmentation to a concussion grenade. Called the “enhanced tactical multipurpose hand grenade,” it will fill a capability gap from 1975, when the MK3A2 concussion grenade was taken out of service due to an asbestos hazard, according to an Army news release.

“They are currently carrying one M67 grenade that provides lethal fragmentation effects,” explained Jessica Perciballi, a project officer for the ET-MP grenade. “With the new multi-purpose grenade, they can carry one ET-MP grenade and have the ability to choose either fragmentation or concussive effects desired for the situation.”

The grenade is also designed for ambidextrous use, and can be armed and thrown from either hand with ease. Additionally, it has new safety features.

A Soldier at Fort. Benning throws a prototype, inert grenade from the kneeling position.U.S. Army photo by Herbert Wortmann

“With these upgrades in the ET-MP, not only is the fuze timing completely electronic, but the detonation train is also out-of-line,” explained Matthew Hall, a development lead on the project. “Detonation time can now be narrowed down into milliseconds, and until armed, the hand grenade will not be able to detonate.”

The request for a new hand grenade came in 2010, and funding for research was approved in 2013. Since then, Picatinny engineers have collaborated with active duty soldiers and Marines to determine what frontline combat troops need in a hand grenade. By 2020, the ET-MP is expected to move to the next stage in its development at the Project Manager Close Combat Systems, which is also located at Picatinny Arsenal.