The World’s Biggest Nerf Gun Is Definitely Not A Toy

We may earn revenue from the products available on this page and participate in affiliate programs.   Remember childhood? The... 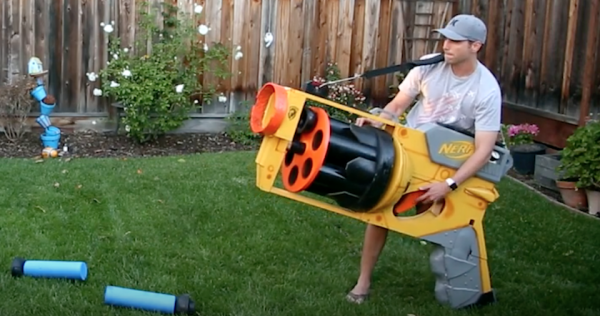 Remember childhood? The Saturday morning cartoons, the endless supply of Fruit Roll-ups, the playing of GoldenEye until your hands became so calloused they resembled those of a 40-year-old migrant worker’s. Those were the days! But guess what? They don’t have to end. Ever. That’s one of the great perks of being alive in the 21st century — adulthood is totally something you can just, like, refuse. And of course, no giant man baby is complete without a giant nerf gun. Well, look no further. We found one.

YouTube science celebrity Mark Rober has created what is, without a doubt, the world’s biggest — and most dangerous — nerf gun. This “toy,” which is equipped with a 3,000 pounds-per-square-inch paintball tank, shoots darts made out of toilet plungers and foam pool noodles at 40 mph. That’s fast enough to shatter glass or the bones in your friend’s face. And with a maximum range of 130 yards, this bad boy isn’t just built for close-quarters combat. With that kind of firepower, you’ll be the undisputed champion of backyard battle forever and always. It’s a childhood dream come true — but for adults!