Bear Grylls has done some pretty gnarly stuff in his lifetime, stuff that even the most hardened men around the... 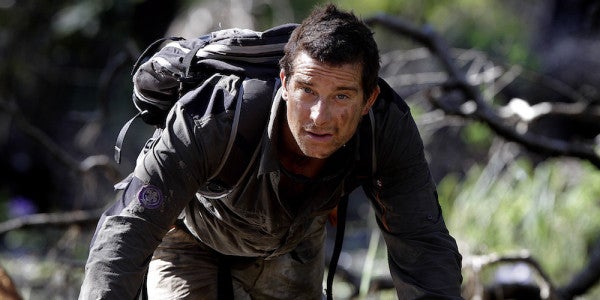 Bear Grylls has done some pretty gnarly stuff in his lifetime, stuff that even the most hardened men around the world probably wouldn’t want to consider. He’s tackled resistance-to-interrogation (R2I) training during his bid to join the U.K.’s elite SAS special forces, survived a near-fatal parachuting accident in Africa that left him terrified to engage in skydiving again, and braved the most hellish landscapes on the planet, from the crashing waves of the North Atlantic to the summit of Mt. Everest.

So how does Grylls — a professional adventurer and avatar of human endurance for millions of viewers around the world, thanks to his beloved series Man vs. Wild — conquer his fears before he embarks on his next attempt to conquer Mother Nature? Simple, he says: Don’t think, just do.

“I've learned that the best way over our fears is right bang through the middle,” Grylls told attendees at the Global Education and Skills Forum in Dubai, according to the BBC. “It really is. The only way you don't see the fear is when you're right on it.”

Like the hundreds of survival skills he’s picked up in his decades traveling the world, Grylls’ ability to overcome fear and self-doubt came with time, he says — and it’s that constant struggle to conquer near-impossible obstacles that made him the man he is today.

“I wasn't very good at school — and I struggled a lot with confidence,” he said of his early years. “[But] the great people I know in life often struggled at school, because it was the struggle that developed their strength.”

In order to succeed, Grylls first had to accept the possibility of failure — especially in situations where his own life hung in the balance. From the BBC:

When he talks about the last exhausting phase of climbing Everest, he describes coming across the body of another climber he had known, Rob Hall, who had died on the mountain two years before.

“I remember just sitting next to Rob, still perfectly there, his hair blowing, as if I could nudge him and he'd stand up and be fine … I desperately needed something to give me strength – and he is such a hero of mine. I just remember this panic filling me – there are a lot of bodies on the mountain, but this was different – we were so close, but now so far away.”

He pushed on and became one of the youngest climbers to get to the summit of Everest. And he says he brought back some snow from the summit and kept it as a liquid symbol of conquering his self-doubt.

With a mentality like that, is there anything that international wildman Grylls actually does fear? Just dealing with the hell that is other people, it seems. “I'm really bad at cocktail parties with lots of people I don't know,” he said. “I really genuinely am.”