Veterans with other-than-honorable discharges will be soon able to receive treatment for issues related to mental health from the Department... 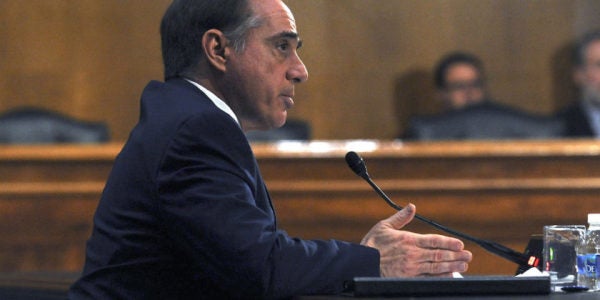 Veterans with other-than-honorable discharges will be soon able to receive treatment for issues related to mental health from the Department of Veterans affairs. The announcement was made by David Shulkin, the VA secretary, during an evening meeting with the House Veterans’ Affairs Committee on Tuesday.

The issue was too important to wait for Congress to approve it, Shulkin said, adding that the change would take place as soon as possible, according to Military Times.

“We have some authorities to do that,” Shulkin said, reports Military Times. “So many veterans are just disconnected from our system. The 20 a day committing suicide are not getting the care they need.”

Veterans and their advocates have been arguing for the change for years. Commonly called “bad paper” discharges, OTH designations make a veteran ineligible for many VA benefits, including health care. For veterans with bad paper, this can lead to severe problems, and in a significant number of cases the discharge and the ensuing loss of a veteran’s benefits is an undeserved punishment.

In some of the cases where service members have been dismissed for erratic behavior, substance abuse, or other problems, those issues turned out to be underlying symptoms of a far more serious mental health issue. According to Military.com an estimated 22,000 veterans with mental illnesses have received an other-than-honorable discharge since 2009. Yet with a bad-paper discharge, a veteran loses access to the care that could improve their well-being. Denying these former service members access access to mental health care also dramatically increases their chances of suicide, advocates say.

“This shift in policy signals a willingness on the part of the VA to finally treat its most vulnerable veterans,” Kristofer Goldsmith, founder of High Ground Veterans Advocacy, told Task & Purpose. In 2007, Goldsmith says, he attempted suicide while serving in the Army, but received a general discharge instead of treatment for his post-traumatic stress disorder.

“We’re going to do whatever we can,” Shulkin said during the meeting. “We’re going to work with you. This is unacceptable, and we shouldn’t have to wait for Congress to force the issue.”

Though no specific timeline was given, Shulkin said he hopes the change will go into effect within a few months, with instructions for individual hospitals on how best to treat those veterans.

Even so, for advocates like Goldsmith, this kind of policy change has been a long time coming. He is also the assistant director for policy and government affairs for Vietnam Veterans of America, and he has pushed this issue for years following his discharge in the Army.

The proposed change is “a recognition that denying healthcare to a combat veteran is nothing but harmful — but the devil is in the details,” he said.

“We still don’t know who will be eligible, and if they’ll have to jump through hoops to get the care that they desperately need.”