If someone can explain what 108% retention actually means, I'd love to hear it. 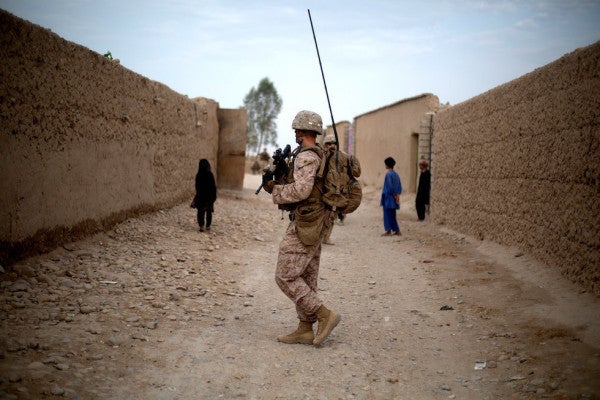 The top sergeant major in charge of troops in Afghanistan said recently that troops serving there have a “108% retention rate,” which sounds as plausible as a peace deal with the Taliban that won't result in the collapse of the Afghan government.

But if someone can explain what 108% retention actually means, I'd love to hear it.

The statistically-questionable retention rate came up late last month during a pow-wow between the military's top enlisted leaders and reporters. During one exchange, a reporter asked whether Afghanistan was having a negative affect on whether soldiers were deciding to stay in uniform or wrap themselves in that precious DD-214 blanket.

“No sir. I would actually say it's quite the opposite,” said Command Sgt. Maj. Timothy Metheny. “Our soldiers, sailors, airmen, and Marines are actually disappointed when we tell them that we have a force cap and we're not going to be able to bring them all into theater.”

“We even looked at how we can rotate different organizations in and out from the United States, one, to remain relevant and fresh with our new troopers, but also to make sure that everybody gets a rotation, gets that combat deployment that they're seeking so badly.

He added: “Our retention rate in theater right now is about 108 percent,” to which the other sergeants major nodded in agreement.

108 percent? What the fuck does that even mean?

To be fair, I tried to clarify what this statistic meant with officials at Resolute Support, thinking that it was possibly a slip of the tongue or maybe, just maybe, it was true that all 14,000-plus troops in Afghanistan just decided to go full hooah and reenlist.

Army Capt. James Deakins, an RS spokesman, emailed back on July 30 that they were “looking into the statistic (discovered the individual who tracks those numbers has redeployed to the states). Please stand by while we find accurate information you can use.”

I never heard from him again, and he ignored my follow-ups. At this point, I'm assuming this was the tried-and-true public affairs trick of ignore and hope it goes away being played out in real time.

Setting aside the math behind Metheny's madness, he left out important details that drive retention decisions besides the glory of serving in Operation Enduring Clusterfuck in its 18th year. There's the fact that reenlistment bonuses are very much in style these days — there have been six bonus messages released this year — not to mention all that money is tax-free if you sign on the dotted line in Afghanistan.

And as the Army News Service noted in June, the service has done well in retaining soldiers in 2019, but being able to deploy to Afghanistan wasn't among the reasons mentioned as part of that success. The service's top career counselor cited more assignment options, quality of life, educational benefits, being able to transfer the GI Bill to family members, and tens of thousands of dollars in bonuses.

Still, Metheny wasn't the only senior enlisted leader to drop a questionable correlation during the press conference. Sgt. Maj. Christopher Kepner of the National Guard Bureau told reporters that the biggest question he gets from guardsmen isn't whether they'll have to go downrange, but instead, 'it's 'deployments are not going to stop, are they, sergeant major?'”

The implication there, of course, is that guardsman are just so stoked to get to Afghanistan and are not interested in earning more money in GI Bill and other benefits.

That's all for now in this week's edition of Task & Purpose calls bullshit. Please be sure to tune in next week when we explore the base general's claim that everyone is super motivated to be running in a massive slinky of a formation.