Don’t Tell Me We Lost The War In Afghanistan

There seems to be a fickle measure of success when it comes to the discussion of whether we won or... 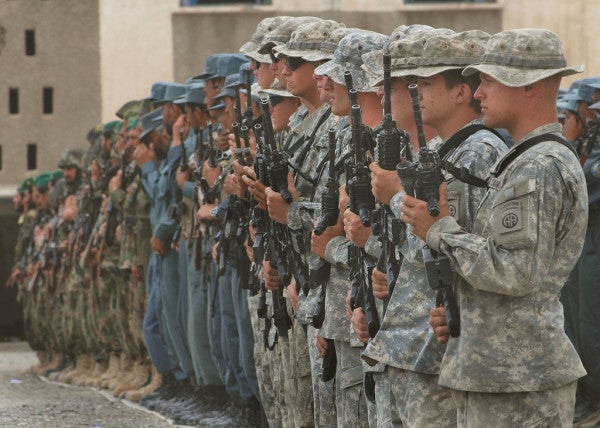 There seems to be a fickle measure of success when it comes to the discussion of whether we won or lost the war in Afghanistan. With six weeks remaining until the official end of major U.S. combat operations, the popular talking point among some is that the war in Afghanistan was lost. While President Barack Obama has announced a nearly 10,000 service-member contingent will remain to train Afghan forces, many have dismissed the 13-year war as a failed, listless expedition.

In today’s hyper-politicized world, we love to have a strict declaration of a winner or loser. Members of both political spectrums constantly have their daggers at the ready when it comes to affixing blame as to “why we lost.” Ask a Democrat and he’ll tell you that the Bush administration never fully supported a clear cut Afghanistan policy and it was just a rest stop on the way to the war in Iraq. Ask a Republican and he’ll tell you that Obama was against the war from the beginning and never allowed the troops to take the gloves off and truly take the fight to the enemy. It is nothing more than a constant barrage of fingerpointing without truly looking at what has been accomplished.

The 27 months I spent in Afghanistan beginning in 2007 never felt like I was deployed in support of a losing effort. Granted, my first tour was marked by long periods spent manning a desk in a tactical operations center. Yet, I would watch as my buddies from advanced individual training were tasked with liberating Taliban-held territory in southern Afghanistan. Over beers and wings back in North Carolina, I would sit and listen to them talk about “the Moose,” known to the rest of the world as the town of Musa Qala, and how it took less than three days to dislodge a Taliban force there that had nearly two years to prepare for an assault. When President George W. Bush attended our division’s pass and review ceremony in 2008, he highlighted that specific operation as just one example of our unit’s prowess and success.

When I left Afghanistan for a second time in 2010, nearly two and a half years later, it never felt like I was leaving a listless, or even losing, cause. My platoon had spent nine of our 12 months working alongside nearly 300 police officers in the Deh Rawood district of Uruzgan province and the training program we implemented for them left the district a better place. The pride and professionalism I saw from the Afghan police officers made me feel like we had done our part in a war that had largely been going on since before many of us were born. One of my platoon’s biggest accomplishments was successfully getting over 60 boxes of supplies delivered to a school right around the corner from the district police headquarters. I’ll never know what the full impact of our training courses or our supply delivery truly was; yet, I take solace in the fact that I hear nearly nothing in the news about the Taliban retaking our old district.

Perhaps little victories are how we measure overall success. Even when we look at the darkest moments of the war, take the battles of Wanat and Keating as examples, we can find overwhelming evidence of victory. While it is universally understood that these were poorly placed and ill-advised positions for outposts, ask anyone that was there and they’ll tell you that there was a clear victor. A personal friend of mine, who was at the battle of Keating, told me that reinforcement units stopped counting the number of enemy dead once they surpassed 200. If we are measuring victory by ground gained, held, and the vast difference in numbers between friendly and enemy casualties, Afghanistan can be seen as a tactical success.

The most infuriating undertone of the whole “won or lost” argument is that the deaths of American service members were somehow senseless and served no greater purpose. To say so, or even imply so, dishonors the sacrifice of our fallen. Of the 16 men I’ve known who have been killed, almost every single one of them joined the Army after the Sept. 11 attacks. They knew the possibility that they could be killed existed and still volunteered anyways. You can debate all you want about whether the Taliban had the capabilities or aspirations to strike at American interests across the globe; yet, the fact remains that they harbored an entity in Al-Qaeda that did possess those objectives. Our presence in Afghanistan gave our enemies a battlefield to meet us on instead of striking out at innocents across the world.

I’m always skeptical of the motivations when some military officer, politician, or pundit says that Afghanistan is a war we “lost.” That sentiment is even further deepened when it is either a teaser for a book or structured as a subtle shot at a White House administration. If people want to claim that Afghanistan is a strategic failure, they are more than welcome to that prerogative even though it is not something that can truly be measured at this moment. We need to allow the current and future generations of Afghan leaders time to work through their growing pains. We often forget that our own beloved United States took years to get it right.

Maybe one day we’ll have a black and white picture of whether we won or lost although I’m not going to hold my breath. Until then, and even after that day, I’ll continue to answer any questions about my service, honor my fallen friends, remember the brave men and women — Afghan and coalition alike — who walked that land with me.

And to anyone who has their doubts about the war: You may say we didn’t win, but you’ll never hear me say we lost.