What Harambe Can Teach Us About The Civilian-Military Divide

On May 28, Harambe, a lowland silverback gorilla, was killed by a sniper to save a small boy who had... 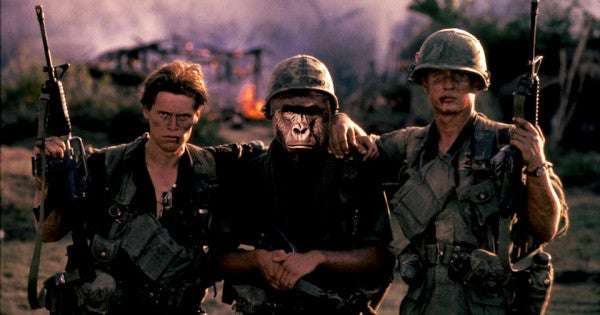 On May 28, Harambe, a lowland silverback gorilla, was killed by a sniper to save a small boy who had fallen into his enclosure at the Cincinnati Zoo. Harambe’s final moments were captured in a video that immediately went viral. He was 17 years old.

During the media firestorm that ensued, a number of wildlife experts went on the record to voice support, however reluctant, for the zoo’s decision to ice Harambe. Nevertheless, the tragic ordeal ignited a fierce, albeit brief, online debate, which, at its most entertaining, pitted angry animal-rights proponents against armies of trolls who mocked the outrage as an example of political correctness run amok.

The controversy around Harambe’s death quickly fizzled out, but the jokes continued to spread like a weeds on a forgotten grave. The viral hashtag #JusticeForHarambe was soon replaced by #DicksOutForHarambe, and thus the gorilla’s legacy grew, both in size and degrees of absurdity. And perhaps no single group contributed to that growth more than the online veterans community, where “dicks out for Harambe” — defined by Urban Dictionary as “the act of pulling your dick out of your pants as a sign of respect for our nigga Harambe” — has become a sort of rallying cry for young vets who feel increasingly at odds with a society that’s “turned soft.”

On veteran blogs, Reddit threads, and Facebook pages, Harambe has found a welcome home in the afterlife. In the four months since his death, he’s surfaced in countless military-oriented memes and tribute videos, sometimes in uniform or wielding a machine gun, but usually just naked, as he was at the time of his death. In one photo, a group of soldiers kneel around a banana with nothing but the words “Praise him” printed across the image. No further explanation was necessary. It went viral.

Plenty of ink has been spilled lately by people trying to make sense of the so-called “civilian-military divide,” but I’d argue that one need look no further than the military’s infatuation with Harambe to uncover the truth they seek. While Harambe memes have been decried by people — especially on college campuses — as either racist, or sexist, or a combination of both, among veterans the gorilla’s legacy has transcended current debates over race and gender to represent a unified front on the digital battlefield, where liberal crusaders are quick to cut down anything that whiffs of masculinity.

There’s a reason PC culture hasn’t flourished in the military as it has in other professional settings, and it’s obvious to anyone who’s ever deployed overseas: being hypersensitive to everyone’s feelings is counterproductive to nurturing the stuff that’s required to survive war. In combat, as in any other situation where survival depends on the cohesiveness of a small group, a certain degree of callousness is crucial. So is honesty: Soldiers don’t have the freedom to choose who they are. They are who they’ve proven themselves to be.

The traits that make someone a good soldier aren’t necessarily the same traits that make someone a good civilian in a society run by so-called “beta males.” Harambe was killed for manhandling a small child, but he probably saw that child as a real threat. He was, therefore, killed for being what a lot of veterans perceive themselves to be: an alpha male. While the other two gorillas in the enclosure kept their distance, Harambe stepped up to protect his domain. Then he was gunned down by The Man. Harambe isn’t just a dead gorilla. He’s a martyr.

Harambe the Meme began as a sort of effigy for political correctness, but he’s since evolved, at least in certain circles of the veterans community, into a symbol for American masculinity under siege. “Get your dicks out for Harambe” isn’t just a fun wiener joke for adults with too much time on their hands. In fact, it’s quite the opposite: A call to action for the real men — the alpha males — among us to rise up again, to rattle the cages that society has built around them, to unzip their pants and let every inch of their manhood fly.