In understanding the culture divide between the civilian and military sectors of the United States, sometimes it's a matter of... 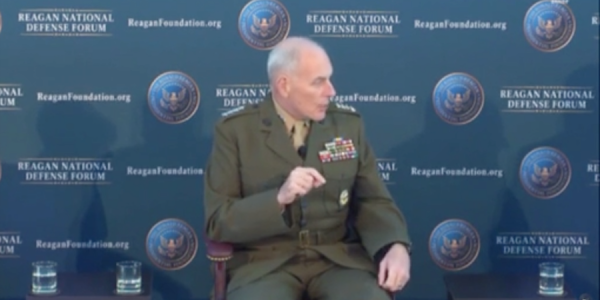 In understanding the culture divide between the civilian and military sectors of the United States, sometimes it's a matter of the military reaching out to civilians, accepting a simple “thank you” for service, or helping civilians understand why maps are needed.

Sen. Joni Ernst, a Republican from Iowa who sits on the Senate Armed Services Committee, remembers arriving in Kuwait to stage combat support operations into Iraq in 2003. The 150 members of the National Guard transportation company who she led didn't have any maps of the country.

“We didn't have maps you have to have to fulfill the needs of our troops on the ground,” she recalled to audience on Nov. 7 at the Ronald Reagan Presidential Library.

And still, as an officer in the National Guard, she understood that it was her job to ensure that her troops had the ammunition, the supplies, and yes, the maps.

Speaking on a panel at the Reagan National Defense Forum, Ernst noted that up-through-the-ranks experience is a way to convey to the nation's civilian leadership what are the nuts and bolts needs of troops in the field.

It is a covenant with our nation's armed forces, she said, that is being injured and impaired by the congressional budget cutting process known as sequestration. Having members who served in the military in Congress is a way of explaining why those “granular needs” of the troops must be met.

The panel, which was called Bridging the Gap Between the Nation and the Military, included Ernst, Army Chief of Staff Gen. Mark Milley, and Marine Corps Gen. John Kelly. Kelly commands the U.S. Southern Command, and said he can recall with certainty that nearly a half century ago, the divide was much worse.

“As the oldest serving member of the U.S. armed forces, I was actually drafted,” Kelly said.

As a young private first class in the Marine Corps, travel in uniform was required, and Kelly recalled the response in airports and transit points.

“Everyone ignored us,” he said. “Everyone except some veterans from World War II and the Korean War.”

The newfound respect for people who serve in the military, Kelly said, is the fruit of civilians recognizing the troops “who didn't have to serve … but serving.”

Kelly also remarked to an audience of policymakers, members of Congress, Pentagon officials, and journalists that the process of embedding reporters in combat units ushered in during the wars in Iraq and Afghanistan has done much to actually improve the image of troops in service and veterans.

“To be fair, there has been a fair amount of fair and balanced reporting,” Kelly said.

Army 1st Lt. Joseph Riley, the most junior member of the panel, shared that outreach at elite universities to recruit the highest strata of university graduates should play a role. Milley concurred, “We are the people's army … and that the broadest spectrum of recruits are needed.”

Riley, an ROTC graduate from the University of Virginia, bucked his parents' initial objections to seek a military career. In his last year at school, he was awarded Rhodes and Truman scholarships.

“Our generation expects to have three or four careers, and we have to convince the high performers to stay in the military.”

Ironically, because of dedication to higher education, Riley was inadvertently placed on a “force reduction” panel that could have separated him from the military. It may well have been another corollary to the problems caused by sequestration, the automatic budget cuts enacted by Congress.

“The military personnel system can be maddening,” the young lieutenant said.

The Army chief, Milley, immediately weighed in, “There are 50,000 examples of what goes wrong with military personnel,” and then he quipped, “But I have my new best friend here,” indicating Lt. Riley.

Milley said, “Welcome back to the U.S. infantry, lieutenant.”

William Lynn III, former undersecretary of Defense, noted that the military recruits best from the citizenry of states in the Midwest and South, and fewer from the East and West coasts. Also, Lynn said, to some degree the professional military has leaned across generations toward being a kind of “family business.”

Ernst noted that the vast majority of gratitude expressed for service is sincere, “and that being thanked is important.” She also added, “We are never victims. We are always survivors.”