This year, more than 12,000 people set aside time to write personal letters to Medal of Honor recipients 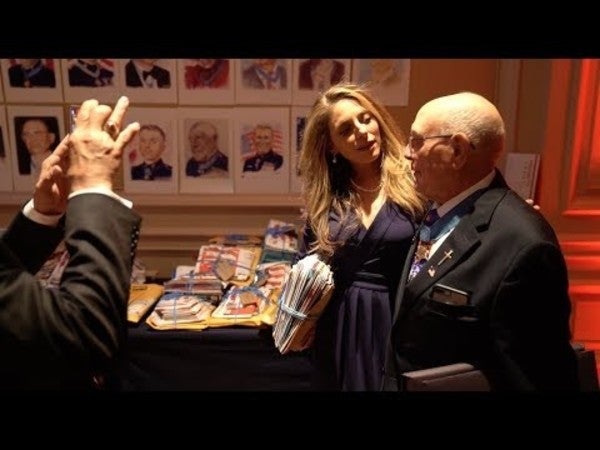 This year, more than 12,000 people set aside time to write personal letters to Medal of Honor recipients. They wrote from their kitchen tables and desks, their homes and offices. Some were in class, from elementary to high school; at least one wrote from prison.

They typed, they drew, and they wrote in pen, pencil, and marker, then sealed the letters and sent them to Janine Stange, who for the third year in a row collected, sorted, and delivered them to 72 recipients of the nation's highest award for valor.

Janine Stange in front of the letters that thousands of strangers wrote to 72 Medal of Honor recipients as part of this year's Medal of Honor Mail Call.

Called a Medal of Honor “mail call,” the campaign started on March 3 this year, and the letters were delivered in person to 28 recipients at an event in Arlington, Virginia, this past weekend. Those recipients who were unable to attend will receive their letters in the mail in the coming weeks.

“The outpouring was incredible,” Stange, a motivational speaker and singer who was the first person to perform the National Anthem in all 50 states, said in a statement. “From elementary students to senior citizens, letters were sent from veteran groups, corporations, hospice centers, special education classes, police departments, even from those who served alongside our recipients. It was an overwhelming outpouring of gratitude.”

“This is the third year of the mail call,” she added. “These guys love getting the letters, you can see it in their faces when they're given their bundle. But the real value in this project is giving citizens the chance to research their exploits and sacrifices, and express gratitude to them and their fellow veterans.”

The letters came in all shapes and sizes from all 50 states. Some were packaged in standard white envelopes, others were red, brown, emblazoned with the American flag, or sealed in yellow packages. But it's the content of the letters that stands out. Each one, written by a stranger, is addressed to a specific recipient. They're personal, thoughtful, and, well, pretty freaking awesome.

People of all ages and all 50 states sent thousands of letters to Medal of Honor recipients.Janine Stange

One letter addressed to Kyle Carpenter, the youngest living recipient of the Medal of Honor, came from an 8th grader named Brooke:

“Throughout my life I have been taught to be selfless. But why? When I hear stories like yours, I know why. When I read that you jumped on the grenade to protect your fellow Marine, I thought to myself, would I ever be that brave and selfless to do that? To be honest, I probably wouldn't, but I want you to know that you inspire me.”

The Marine Corps infantryman was awarded for his heroism in Marjah, Afghanistan on Nov. 21, 2010, when he jumped on an enemy grenade that was hurled onto his rooftop security position, saving the life of another Marine by absorbing most of the blast.

A letter from an 8th grade student to Medal of Honor recipient Kyle Carpenter.Janine Stange

“It's really moving,” Medal of Honor recipient Thomas Norris said in the press statement. “I'm in awe because you just don't expect this kind of response from people you don't know. I'm very honored that people took the time, they have my heartfelt thanks.”

A former Navy SEAL, Norris rescued two pilots, who were lost in enemy territory, after their aircraft went down in Quang Tri Province Vietnam in April, 1972.

12,000 letters were written to Medal of Honor recipients this year.Janine Stange

In another letter, an unidentified student wrote “I know you say you don't consider yourself a hero, but you found yourself in a situation where you had a choice to act selfishly or selflessly, and you chose the latter. I want you to know that I want to be the same way.”

The are no specific guidelines for authoring a letter for the campaign. Instead, the campaign's website encourages writers to “tell them how you felt while learning about their acts of selflessness and courage.”

Some participants sent gifts with their letters, like one man who wrote from a correctional institute in Pennsylvania to Gary L. Littrell, who was awarded the Medal of Honor for his heroism during a four-day assault on his battalion during the Vietnam War.

“Enclosed with this letter is a 'Reese-Fast Break' candy bar that I had purchased at the institution,” the letter reads. “I'm embarrassed that I am not able to offer you something that is a more appropriate and fitting gesture of gratitude for a hero as yourself, but I hope that you will do me the honor of accepting this as a small token of my sincere gratitude for the freedom that we as Americans enjoy and often take for granted.”

SEE ALSO: This is all that was left of Kyle Carpenter's M4 after the attack that led to his Medal of Honor