“We stand on the shoulders of giants.” 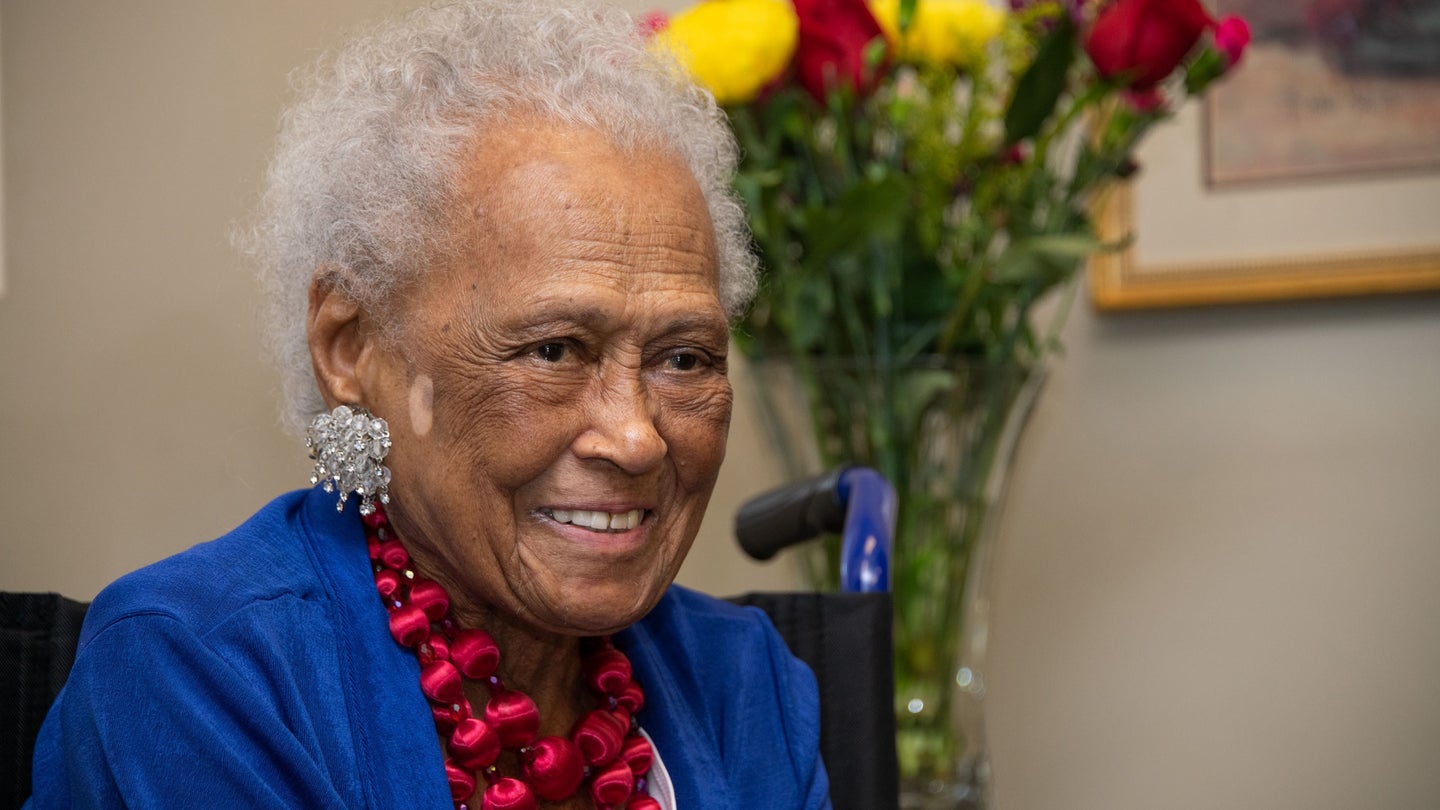 The oldest living member of a trailblazing World War II battalion of Black women has been awarded Congress’ highest honor for civilians.

Romay Davis, who served in the motor pool of the 6888th Central Post Directory Battalion during World War II, was awarded the Congressional Gold Medal on July 26, according to an Army release. The battalion, nicknamed the Six Triple Eight, included 855 Black women from the Women’s Army Corps, the Army Services Forces, and the Army Air Forces who were instrumental in getting mail delivered to troops in Europe during the war.

The 6888th was the only African-American women’s unit to serve overseas during World War II, according to the Army, aside from smaller units of nurses serving in England, Australia, and Africa. In March this year, President Joe Biden signed legislation that approved awarding the Congressional Gold Medal to members of the battalion.

“The members of the Six Triple Eight fought in World War II on many fronts,” Lt. Col. Charity Adams Earley, commander of the 6888th, is quoted as saying in the release. “One, the prejudice of males against females; two, the prejudice of white against Blacks; three, the prejudice of natives against foreigners; four, organizational prejudices brought from home; and five, the common enemy we all fought.”

The 6888th was created in November 1944 after African-American organizations pushed the War Department to allow Black women to serve in Europe. They were trained at Fort Oglethorpe, Georgia, the Army Center for Military History says, where they learned “to identify enemy aircraft, ships, and weapons; to climb ropes’ to board and evacuate ships’ and to do long marches with rucksacks.” In 1945, the women shipped out for Britain.

When they all finally arrived in Birmingham, England, they found a warehouse “stacked to the ceiling with letters and packages” meant for U.S. troops on the front lines. The women immediately got to work in the cold, dark, rat-infested warehouse to sort the mail. They worked around the clock, seven days a week, not just sorting mail but investigating “undeliverable” mail to determine who it was intended for, and returning mail addressed to those who had died.

With the system the 6888th created, they were able to process an average of 65,000 pieces of mail every shift and cleared a six-month backlog of mail in just three months. But despite their success, they continued facing prejudice and racism. Earley was “reprimanded by a colonel for ‘race-mixing,’” according to the Army, after she accepted an invitation to a White Officers Club. And when a male general came to inspect the 6888th, she blocked him from entering the women’s private rooms because some of them were sleeping. Those same women weren’t present when the general ordered the women of the 6888th to get in formation; when the general criticized her in front of her troops, Earley explained that the women worked shifts around the clock.

As she tried to explain, the “general cut her off and threatened to send a ‘white first lieutenant’ to show her how to command the unit,” the Center for Military History says. Earley responded: “Over my dead body, sir.”

Despite the challenges the 6888th faced, Davis said in Monday’s press release that joining the military was “one of the biggest and best things I have chosen to do.”

“I wish I could encourage more young people to take a stint away from home and join the military because it is one of the best educations one can get,” she said.

During her time in Europe, she regularly drove two-and-a-half-ton trucks and staff cars throughout the war-torn countryside. After the war, the Army said, Davis went on to use the G.I. Bill to attend fashion school and had a 30-year career as a fashion designer. She also earned her master’s degree, and in her 70s she earned a second-degree black belt in Taekwondo.

In her 80s, Davis worked at a local Winn-Dixie grocery store where “she has made a tremendous impact on her community,” the Army said. And in 2020, the parent company of Winn-Dixie grocery stores announced the “first-ever Romay Davis Belonging, Inclusion and Diversity Grant program,” meant to support organizations that assist “in leveling the playing field” for communities that face racial inequality.

“That’s what I call perseverance,” Air Force Chief of Staff Gen. C.Q. Brown, Jr., said in a video tribute shown at Davis’ ceremony, according to the Army. “Nearly 80 years from her brave service, we have our first African American secretary of defense and service chief and our first female chief master sergeant of the Air Force.

“We stand on the shoulders of giants,” Brown said. “Because of the hard work of generations of African Americans and women leaders like her, your recognition is well deserved, and you’re an inspiration to all of us.”