Protecting And Honoring The Right To Vote

“How many have died?” That was my question upon landing in Cambodia in the fall of 2001. I was there... 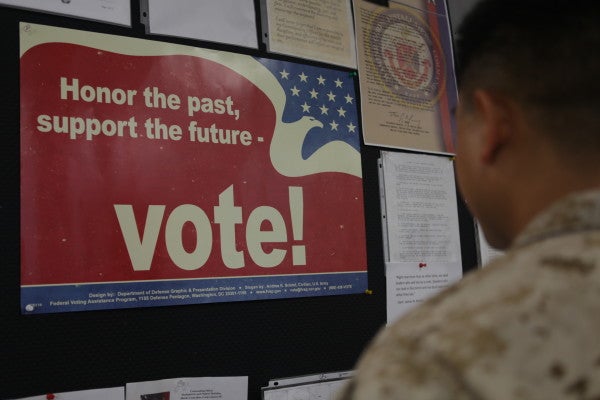 “How many have died?”

That was my question upon landing in Cambodia in the fall of 2001. I was there with an international organization to train candidates in advance of an upcoming election. Toch Voeun, a 54-year-old candidate, had been gunned down in his village of Siem Reap's Ta Peam.

The answer to my question was three. Voeun’s death was the third political killing in Cambodia in the past two months.

As an American, it was hard to imagine a candidate being gunned down for his willingness to challenge a broken political process denying citizens their basic human rights. As disheartened as this was, I was amazed to watch a stream of candidates step up to fill the place of the life that had been taken. Their commitment and willingness to sacrifice for a cause they believed in remains fresh in my mind today. I couldn't image this ever happening in America today.

While we don’t have candidates killed for attempting to participate in the electoral process today, our history tells a different story. On Feb. 18, 1965, civil rights activist and church deacon Jimmie Lee Jackson was beaten and shot by Alabama State Troopers following a peaceful march to call for basic voting rights. He died from his wounds eight days later.

Less than a month after the death of Jimmie Lee Jackson, thousands marched 54 miles from Selma to the Alabama State Capitol in Montgomery. All they wanted was to vote. This was a right that had been promised to them almost 100 years before by the 15th amendment. They were willing to give their lives for this basic right.

The actions of these brave civil rights workers and the violence of the racist local officials shocked and galvanized a nation. Congress subsequently passed the Voting Rights Act. President Lyndon Johnson signed the act into law 50 years ago today on Aug. 6, 1965. In signing the legislation into law, Johnson declared, “Today is a triumph for freedom as huge as any victory that has ever been won on any battlefield.”

There is clear progress: African Americans, Latinos, and women are voting at record levels. But the struggle to ensure more people vote remains. The Supreme Court's recent gutting of Section 5 of the Voting Rights Act has opened the floodgates for actions designed to limit the number of citizens voting.

Twenty-one states have passed laws designed to restrict the participation of citizens in elections. In North Carolina, legislators voted to limit early voting and same day registration after these efforts had been shown to increase voting by African American and Latino voters. Just yesterday, a federal appeals court found that Texas’ voter identification law violated Section 2 of the Voting Rights Act. In that effort, gun licenses counted as a valid form of identification while student identification issued by state universities did not.

On the flip side, many ideas to increase participation are being proposed, and in some cases, adopted. At a town hall meeting earlier this year, President Barack Obama raised the issue of mandatory voting. Every male in America has to register for selective service. Everyone has to respond to jury duty. Over 25 countries around the world have compulsory voting of one type or another. Greek citizens who fail to vote have trouble getting a driver’s license or passport. Australia fines citizens who do not vote.

There is an interesting argument behind mandatory voting. While I am not yet ready to embrace it, we should all agree that more people voting is a good thing. It makes our democracy stronger. It gives our elected officials a greater claim to having — as the Declaration of Independence states —the “consent of the governed.”

But setting aside more controversial topics like mandatory voting, there are a number of things that are just common sense. We can start by having automatic and universal voter registration for all citizens, and ensuring when you move, your voter registration automatically moves with you. We need to give all citizens 30 days access to in-person or mail ballot early voting. This must include evening and weekend access. For those like me who chose to vote in the polls on election day, we should guarantee that no one should ever has to wait more than 30 minutes to cast a ballot. To facilitate the ease of absentee voting, every citizen should mailed an absentee ballot with postage paid. And finally, we should have a system that ensures all Americans serving overseas have a chance to make sure their vote is counted. This is not just American military personnel, but also civilians serving and volunteering abroad in remote locations, plus Americans working overseas.

There are encouraging signs from the states. Colorado, Oregon, and Washington have worked to modernize their election systems and include things like automatic mail ballots and voter registration. Here in California, Secretary of State Alex Padilla has been aggressively moving toward adopting these policies and many others.

It is clear we need a new generation of leaders to continue the fight to ensure that all citizens have access to that precious right to vote.

Today we honor those brave leaders who were willing, and too often did, sacrifice their lives so our citizens could have that basic right to participate in our democracy. But in honoring them, we must commit ourselves to continue their struggle. We need a new generation of leaders willing to continue to work to ensure that precious right so many died to provide is protected.

No one is asked today to give your life. You just need to give your voice, your time and that most precious right, your vote.