Being SecDef Could Ruin Mattis’ Legacy

“I love Mattis, but I don’t love him as SecDef,” writes Erin Simpson, senior editor of the foreign policy publication... 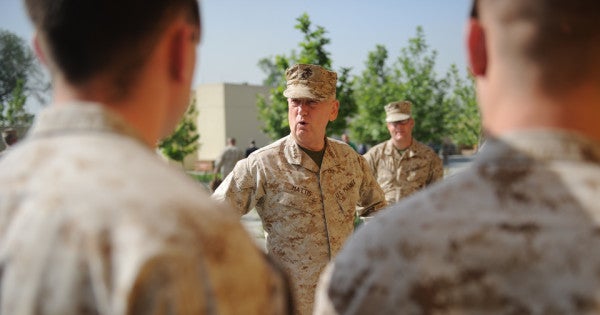 “I love Mattis, but I don’t love him as SecDef,” writes Erin Simpson, senior editor of the foreign policy publication War on the Rocks. “You can’t run the Pentagon like the First Marine Division.”

Mattis faces one obstacle already in that he would need Congress to pass a bill exempting him from the requisite seven-year, cooling-off period between active military service and assuming the role of Defense secretary. But it’s not only a question of whether he can, but if he should.

“The point is not that Mattis is unqualified. Rather, the point is that he hates this shit,” Simpson writes. “Budgets, white papers, and service rivalries, not to mention the interagency meetings and White House meddling — these tasks are not what you go to Jim Mattis for. Not only does the role of secretary of defense not play to Mattis’ strengths, but success in that role would compromise much that we admire most in him: his bluntness, clarity, and single-minded focus on warfighting.”

She’s not the only one who feels this way.

Army veteran Phillip Carter and former Pentagon and National Security Council official Loren DeJonge Schulman, who both work at the Center for a New American Security, have concerns about Mattis filling this role, too, but for different reasons.

“But we should be wary about an overreliance on military figures. Great generals don’t always make great Cabinet officials. And if appointed in significant numbers, they could undermine another strong American tradition: civilian control of an apolitical military,” the pair writes in The Washington Post.

The greater problem with Trump’s apparent quest to surround himself with military leaders is that “relying on the brass, however individually talented, to run so much of the government could also jeopardize civil-military relations,” according to Carter and Schulman.

While a heavy concentration of military leadership in the cabinet poses a dilemma for the civilian government, it shouldn’t be viewed simply as a matter of quantity. It’s the qualities of the veterans who fill those posts that we should be most concerned with. In the selection process, Trump would do well to consider that some veterans can parlay their military careers into successful political ones, while others cannot.

Mattis, whose reputation precedes him, built his career on candor, clarity, and pure dedication to his missions and his Marines. That is his legacy. But it’s worth wondering if he will sacrifice the legacy that made him a legend to do the job of secretary of Defense the compliant, boring, political way that it needs to get done.

(Update: This article has been updated to reflect that Mattis has been nominated to serve as secretary of defense. Dec. 1, 2016; 4:50 PM)