2015 Warrior Games Athlete: ‘My Life Is Not Over, It’s Just Changed A Little Bit’

Former Marine artilleryman Anthony McDaniel wipes the sweat from his face, and smiles brightly, having just finished the shot put... 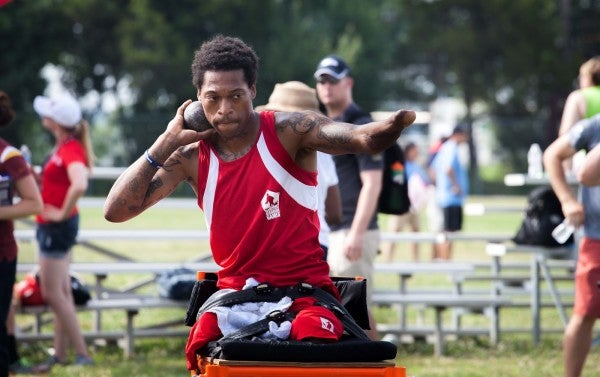 While under the shade of his team’s tent, a man jokingly asks McDaniel if he wants a beer, opening a cooler full of ice cold water. “We have Corona, Coors, take your pick.” McDaniel laughs, saying he’ll take a Corona, and grabs a bottle of water. Preparing for the games has kept him on a strict diet, meaning no beer. That will have to wait until the games are over.

McDaniel, who was seriously injured by an improvised explosive device in Kajaki, Afghanistan in August 2010, is among the 250 athletes competing in this year’s Warrior Games at Marine Corps Base Quantico, Virginia.

The events range from track and field, to cycling, swimming, wheelchair basketball, and sitting volleyball for service members from all branches to compete in. McDaniel, who competed in the shot put, discus and track events on June 24, got into adaptive sports when he started playing wheelchair basketball while at Naval Medical Center San Diego, in order to help with his rehabilitation.

It was at this time that McDaniel first heard of the warrior games, and decided to compete.

“I said, ‘You know what, I’m a sports guy all the way, regardless of what it is, even if I’ve never done it,” recounts McDaniel, who has been playing sports since he was four. “I just enjoy sports.’ So I came out to the tryouts, and started working on basketball at first.”

From there, McDaniel got into track, which he says involves much of the same motion as basketball.

“So they started getting me into the wheelchair racing for track, and since then I just kind of fell in love with it,” said the 26 year-old Marine veteran. “Every opportunity I get to come out, whichever sport I’m able to compete in, I just enjoy.”

Retired Marine Sgt. Anthony McDaniel, smiles for a photo after his shot put match during the 2015 Warrior Games, June 24.

McDaniel says that the drive that led him from the hospital bed to the track field stems from his desire not to have his injuries define his potential.

“When I first got injured, I just had a son the day before I deployed, and I didn’t get to see him,” explains McDaniel, saw met his son for the first time while at Walter Reed National Medical Center. “I was looking at this little fella, and I was like: ‘you know what, I’m going to get out here, and whatever it is, I’m going to keep pushing and keep going forward.’ I didn’t want to be stuck right there.”

Pausing for a moment before continuing, McDaniel looks toward the tent where the rest of his team is gathered. Athletes rest in the shade, catching their breath and talking as they prepare for another round of games. Like McDaniel, each one has overcome numerous challenges and barriers to be there.

“I wanted to get better, get stronger, get smarter,” McDaniel said with a smile. “My life is not over, it’s just changed a little bit. I want to keep pushing.”