His hunger knows no bounds. 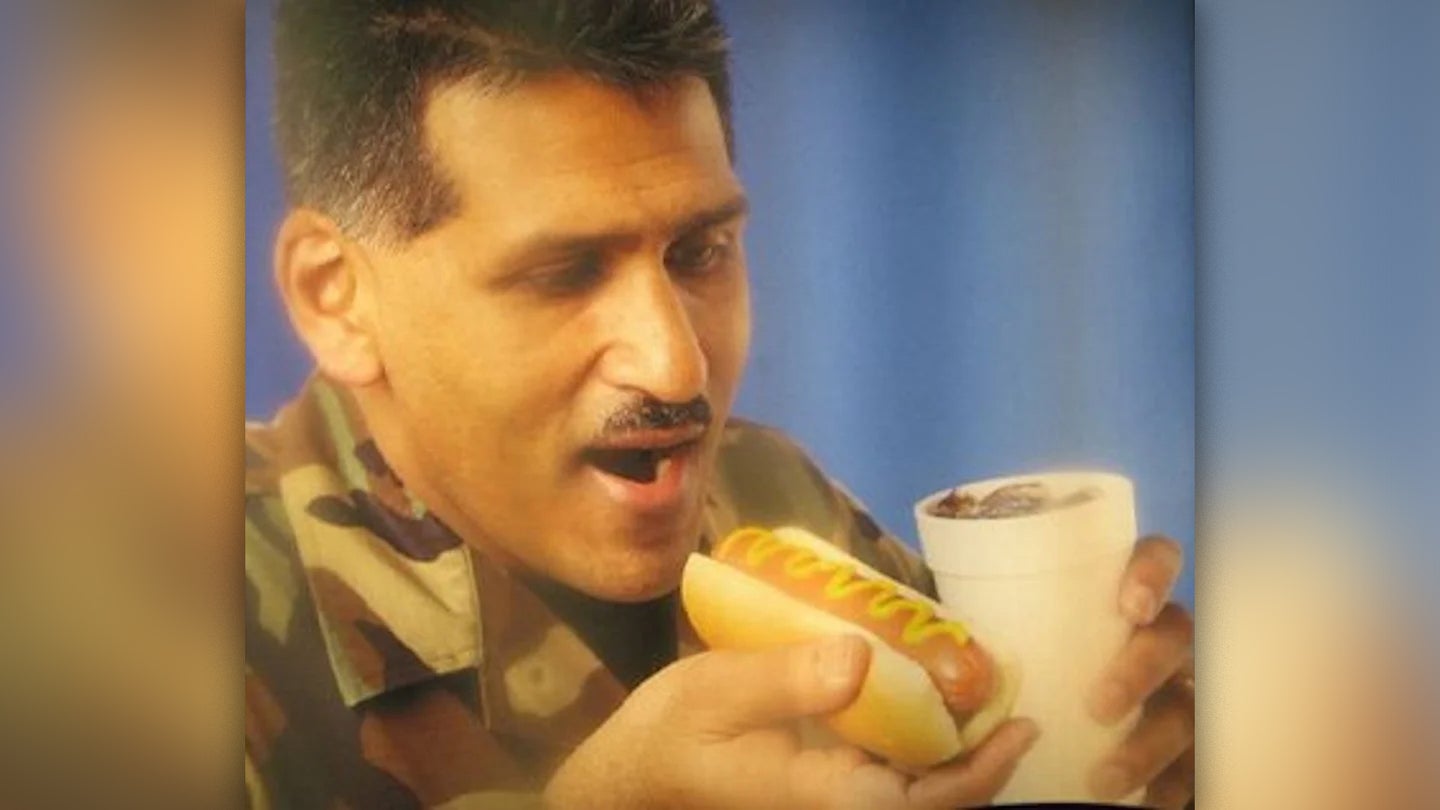 For nearly two decades, his identity and origins have remained something of a mystery to U.S. service members. His face has been plastered across base exchanges and internet forums around the world, eyes fixed on a mustard-laden hot dog before him, mouth agape, a soda gently cradled in his other hand. His is a portrait of both immediate hunger and imminent satisfaction, an advertisement for the quick-grab snacks that, whether the military wants to acknowledge it or not, are the real fuel of the human weapons system. He is the “AAFES Hot Dog Guy,” and his hunger knows no bounds.

In reality, his name is Robin Williams and he is the current Healthcare Program Manager for the Army & Air Force Exchange Service — and after years of questions regarding his viral photo, his origin story is finally known to us.

In a July press release that I’m embarrassed to have missed at the time of its publication, AAFES editor Robert Philpot details the extremely unlikely yet hilariously mundane origins of the AAFES Hot Dog Guy, who first arrived at Exchange HQ in 2004 as an active-duty Air Force senior master sergeant and the service’s Public Health and Food Safety liaison.

According to Philpot, Williams was assigned to the Exchange “at a time that there was a heightened concern with food vulnerability and the potential for bioterrorism attacks on the Nation’s food supply and the risk of targeting military installations in particular” in the aftermath of the September 11th terror attacks.

Through his work enhancing the Air Force’s food safety program, Williams got to know two key personnel: AAFES VP for consumables Reggie Dawson and Michelle Nurse, a buyer who was working on the new “Snack Avenue” concept at the Exchange’s then-called Shopettes, which “not only served coffee and prepackaged snacks, but also incorporated a new feature with a self-serve roller grill that cooked items such as taquitos and hot dogs for the customers.” (And people say government innovation is dead.)

Collaboration is the magic behind most great innovations, and in the case of the beloved AAFES Hot Dog Guy photo, teamwork truly made the dream work. As Dawson and Nurse were hard at work working on a rebranding and advertising campaign for the new Snack Avenues as Exchange Shopettes, they called on Williams for a relatively innocuous task: take a few photos for the concept’s menus.

This, according to Philpot, is where shit gets off the chain:

“One day, Reggie called me and said ‘Hey, we want you to take some pictures for us,’” Williams said. “I was caught off-guard, but then asked what the pictures were for, to which they responded, ‘They’re for a menu.’ Being new to working in the retail business environment, the only thing I could think of was, ‘Oh, they just want some pictures for the restaurant upstairs in the building. Why not? This should be fun.’ At the time, I completely forgot about how global the Exchange was and also oblivious to the potential use of images for broader marketing.”

Williams went to the photo studio, where he found an array of food immaculately prepared and on display.  He also met a woman who introduced herself as the “food makeup” person. “Wow, I never knew such a job existed,” he said. “I did not realize at the time that there was a whole art of preparing food for photos,” he said. Then the photo shoot began: “They said, ‘Hold the drink up and look like you’re enjoying the hot dog.’ I thought, ‘This is fun.’ We had a good time taking pictures.”

After his impromptu photoshoot, Williams didn’t hear much from Dawson or Nurse until a few months later, when the pair informed him that general managers at a conference loved his photos so much that they were planning on replacing the existing long-running menu board photos with his image.

Williams “only expected the photo to be used in the HQ restaurant, so he was quite surprised when they informed him that the menu boards were located above the Snack Avenues, and the photo would eventually be in every Shoppette around the world,” Philpot writes.

The picture quickly went viral on military-focused internet forums before popping up in places like Reddit. During a deployment several years later that saw Williams traveling between numerous DFACs downrange, young service members started approaching him, asking him if he was the ‘Hot Dog Guy,’ and requesting photos with him.

Despite his relative notoriety within the ranks, the internet quickly became fascinated with the mystery of the AAFES Hot Dog Guy. Accordion got Philpot, one theory suggested that the photo was taken as early as 1992. Others were convinced that “it inspired a sight gag on the animated TV series ‘Rick and Morty.’” One artist even created a comic inspired by Williams.

Despite the ridiculous attention thrust upon him, Williams “has [remained] good-natured” about his strange meme status within the ranks of the U.S. military — although, as he told Philpot, he’d rather be known for something else.

“Throughout the course of my career, the one thing that I try to leave behind when I move on to another assignment is a positive reputation that, ‘Robin worked his tail off while he was here. He committed to the job. He did his best,” Williams told Philpot. “I want my legacy to be that I helped others, as well as the organization, or left a positive impression that inspires other people to be positive and successful as well.”