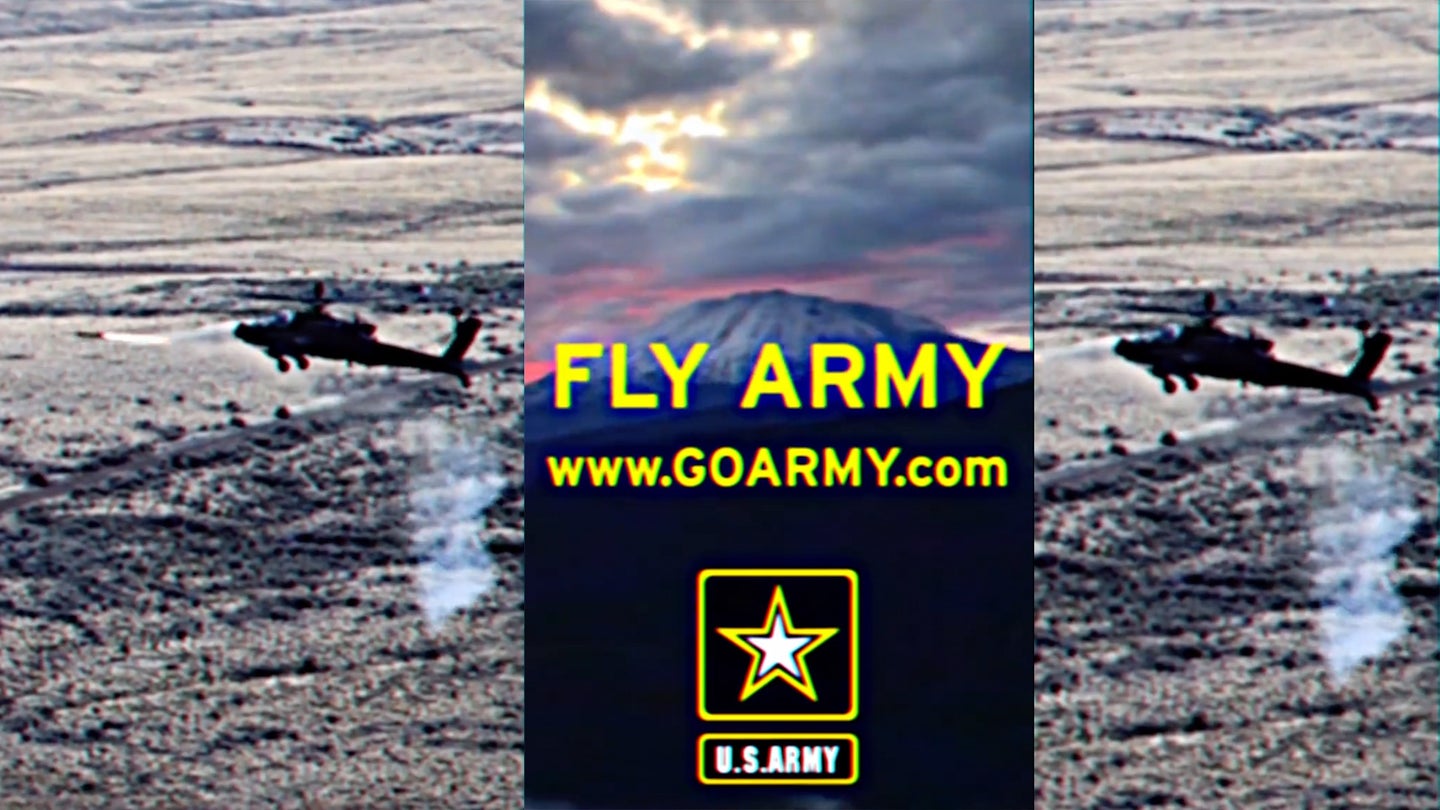 The Army may want to know “what’s your warrior,” but this new retro tribute video just wants you to be all you can be.

Produced by the 16th Combat Aviation Brigade stationed at Joint Base Lewis-McChord in Washington State, the new video shows the wonderful, wide world of Army aviation.

As the video says, “there’s just one place where you can go from high school to flight school” and fly with an organization that “has more pilots than the largest airline.” Whether it’s Black Hawks, Chinooks, or Apaches firing anti-tank missiles, as the Army says, “we need you.”

Sign me up, especially if it comes with everything in this video, which is a throwback to the Army’s classic “Be All You Can Be” recruiting ads that so many service members and veterans might remember from the 1980s.

These ads first debuted in 1981, and much like the present day Army, the service was falling short on recruiting at the time. While the service had met its recruiting goals in 1980, only 54 percent of new soldiers had high school degrees or had “upper half” test scores and the service was, essentially, looking for smarter recruits.

One ad opens with a soldier parachuting out of an airplane. “We do more before 9 a.m. than most people do all day,” says the voiceover.

Improbably enough, that ad ended with a feat that has never  actually been accomplished to this day: a soldier sharing a friendly post-jump cup of coffee with his First Sergeant. Find your future in the Army, indeed.

Another ad from that era shows a young enlisted soldier getting a college acceptance letter. After just two years, this soldier has, as his sergeant tells him that he has, “graduated” and is on his way to being all he can be.

Another shows a more intensive side of military life. Army Rangers jump out of planes and Black Hawk helicopters, all of them, as the commercial says, “reaching deep inside you for things you’ve never known.”

Afterwards, a young Ranger, apparently flown on a corporate jet, meets his parents, proud and happy.

In another ad that will ring true to anyone under the age of 50, a young soldier is on the phone with his parents, who don’t know how to use one of these newfangled home computers.

While mom, dad and sis are befuddled, this young soldier “has an edge on life” and can use his advanced training to let them know that the computer connects to the printer with a cord. Cue the soaring music and the “Be All You Can Be” slogan.

“Be All You Can Be” was a relatively popular recruiting slogan. It may not have included a young John Travolta driving away in a badass muscle car, like an earlier 1970’s ad, but it was the Army’s pitch until 2001. As one advertiser wrote, it hit “a psychological bulls-eye, appealing to the dropout as well as the high school graduate.”

Maybe that wasn’t the intention of an Army specifically looking for high school graduates, but it worked. And this new retro video from the 16th Combat Aviation Brigade works too. Soaring music, helicopters flying over Mount Rainier? Sounds good to me..

As the video says, “keep on reaching, keep on growing.” And enlist for aviation while you’re at it.