30 years after Desert Storm, an Air Force general says we’ve forgotten the lessons that made it so successful 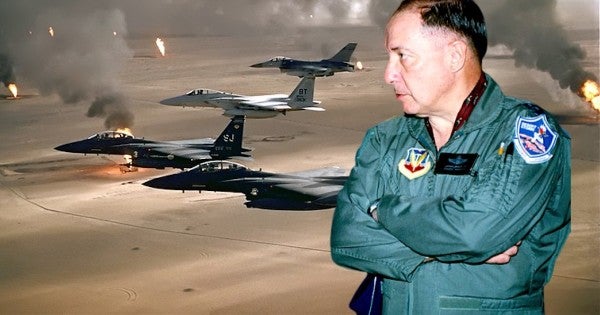 Editor’s note: An earlier version of this article was originally published on Jan. 20, 2020.

When Air Force Gen. Chuck Horner (ret.) took to the podium at the dedication of the National Desert Storm and Desert Shield Memorial site in Washington D.C. in February 2019, he told the audience that people often ask him why a memorial is necessary for a conflict that only lasted about 40 days.

“These two monuments are inexorably linked together,” Horner said. “Because we had in Desert Storm a president and a secretary of defense who did the smartest thing in the world: they gave the military a mission which could be accomplished by military force.”

The Desert Storm Memorial “is a place every military person that’s going to war should visit, and they learn to stand up when they have to, to avoid the stupidness that led to that disaster” in Vietnam, he added.

Now, 30 years after the operation that kicked Saddam Hussein’s Iraqi army out of Kuwait began, the U.S. is stuck in multiple wars that Horner says resemble the one he and his fellow commanders tried to avoid while designing Desert Storm.

Horner shared his perspective on what went right in the Gulf War, and what’s gone wrong since then, in an interview with Task & Purpose.

Task & Purpose: When I was researching for this interview, I saw a couple videos where you mentioned an incident involving the sleeves of your uniform being torn off in a bar fight. Would you mind telling me about that?

Chuck Horner: It was back when I was a captain. Captains do wild, crazy things, that’s why they’re captain. And it wasn’t really a bar fight, it was a snowball fight in a bar, an officer’s club bar. Two of the guys got mad and I separated them and they pulled the sleeves off my blue dress uniform.

Then the colonel came and he was pissed because I could see he had his pajamas on underneath his great coat and he said “what’s happened here?” and I said “nothing,” and he said, “looks like it” and he turned around and left.

That was at RAF Lakenheath, probably about 1962 or ’63. We used to have some very raucous parties, but the reason this got out of hand was because it was snowing and somebody started bringing snowballs inside the bar.

And that was before your first deployment to Vietnam? Could you tell me about your first combat sortie when you got there?

I first deployed to Vietnam in ’65, and yeah, it was a four-ship and we were going to hit an oil refinery at a place called Vinh. I was afraid of screwing up more than anything else. I hadn’t been in combat before. I was flying number two in an F-105 and we rolled in on this oil refinery and it was just like you’d imagine, with big storage tanks and plumbing, and processing and all that. I really wanted to do good so I concentrated and laid my bombs right in there and they went right where they should go.

And as I’m pulling off I see out of the corner of my eye a big orange ball go right past, maybe two feet from my canopy. And I said “oh, they’re shooting at me,” and my thought was “well that’s fair, because I’ve been bombing them so it’s okay for them to shoot at me,” and I joined up on the leader and we went home. After that, I was very calm whenever I went into combat.

It always surprised me that I never hated the Vietnamese. They were doing their job defending their country and I was doing my job trying to get them to quit fighting in the south. I was more angry with my second tour and the way the war was being run than I was even with the enemy.

In fact, everything in Desert Storm was because all of us, myself, [Gen.] Walt Boomer with the Marines, [Lt. Gen.] John Yeosock, Army, [Gen. Norman] Schwarzkopf, Army, [Adm.] Stan Arthur in the Navy, we’d all been in Vietnam and we vowed we were never going to make those stupid mistakes again.

What were some of those stupid mistakes?

Everybody knows war is horrible, but the politician says, ‘I’ll put rules on the military so that they won’t go out and be totally horrible.’ Well, we wound up in a war that was worse than horrible. It went on and on and on which made it worse and worse and worse.

One thing that we had was a president who gave us a political mission that was achievable with military force. Think about subsequent operations in Afghanistan, and to some extent Iraq. In the case of Afghanistan, they gave us the mission to punish the Taliban, which we did. But then they gave us the mission to bring peace and normalcy to Afghanistan, which military force can’t do. Iraq, we went in there to get rid of weapons of mass destruction, which we couldn’t find, which probably weren’t there, and then we stayed around trying to bring democracy to Iraq, or some form of peace and stability, and of course you can’t do that with military force.

So we were always grateful that Bush gave us the job of liberating occupied Kuwait, but didn’t give us the job of going into Baghdad, which some scholars say we should have. Well, I disagree.

It sounds like there was excellent leadership from the president on down to Schwarzkopf and from the other nations in the coalition. That sounds like a big reason why everything came off as well as it did.

I think for the Americans the big thing was Vietnam kept us humble. We knew what not to do. We didn’t necessarily know what to do but we figured it out as we went along.

Now, we did some things that probably I wouldn’t do again. We took down their electrical grid in such a way that it could be rebuilt very rapidly.

The reason we did that was we wanted to embarrass Saddam Hussein in front of his people. But a guy named Bill Arkin, who is an anti-war activist but has integrity, he was invited by Saddam Hussein to come over after the war and he debriefed me.

He said he was surprised at how little damage we inflicted on the civilian population, and then he said “you did something that was horrible, you took out the electrical grid. Why’d you that?” I said, “because we wanted to embarrass Saddam Hussein,” and he said, “Embarrass? You can’t embarrass Saddam Hussein, he shoots his people and sends the family a bill for the ammunition.”

And so he said that was stupid, because after the war there was a lot of cholera, a lot of the clean water wasn’t being processed because there wasn’t electricity. So we didn’t do everything right, and we didn’t do things for the right reason sometimes because we were Americans, and Americans are not good at understanding their enemy. We tend to think everybody’s like us and they’re not.

I think there was also a bunker that was struck by accident?

The Al Firdos bunker was a legitimate target. It was one of several command and control facilities. What had happened, and I don’t know this, I can only surmise this, was the local commander invited his friends in the local area to come use it as a bomb shelter because it was reinforced concrete. The trouble is, a 2,000-pound precision bomb goes right through that like a dart through paper. And we killed a whole bunch of people and I felt horrible about it and that’s why war is horrible. That’s why you don’t want to have war.

Whenever we run into a situation like that we’d sit down and say “how did we screw up?” And every time we screwed up, we’d make sure everybody knows we screwed up. There was no misplotting things like what went on in Vietnam. In Vietnam, the military lost its integrity, and we swore to never let that happen again because, quite frankly, the only thing a military guy has is integrity.

I heard reports that DoD knew the bunker had been used a shelter during the Iran-Iraq war. Was that something you were aware of at the time?

Well, that target was briefed well before the war. So if someone knew something about it, that was the time to speak up. And maybe they’re criminal. But it was one of several backup command and control facilities and it was the only one that was housing civilians, so I think it was a local decision to put them in there.

I’m wondering how to balance mistakes like that with what you said earlier about not having rules of engagement.

And if you do it how they did it in Vietnam, where they tried to control the violence, all they did was lengthen the war and more people died. We could have fought Vietnam as we fought Desert Storm and we could well have had a better outcome.

So the rules of engagement, in your opinion, constrain commanders from finishing the war as quickly as they have to?

Do you think the reason why the U.S. keeps getting into these unwinnable conflicts, like Afghanistan or Iraq, is because sometimes the lessons from places like Vietnam are forgotten?

Oh, there’s no doubt in my mind; in fact we’re forgetting a lot of lessons now. We’re involved in wars we can’t walk away from, and it’s unfortunate because there are 55,000 names on that Vietnam Memorial and it just breaks me to think they died in vain. I don’t think they died in vain, but you’ve got to look long and hard to find something that justifies their sacrifice. For me the only thing I can think of that justifies their sacrifice is that we took those lessons that led to their death and took it into war and fought war completely differently.