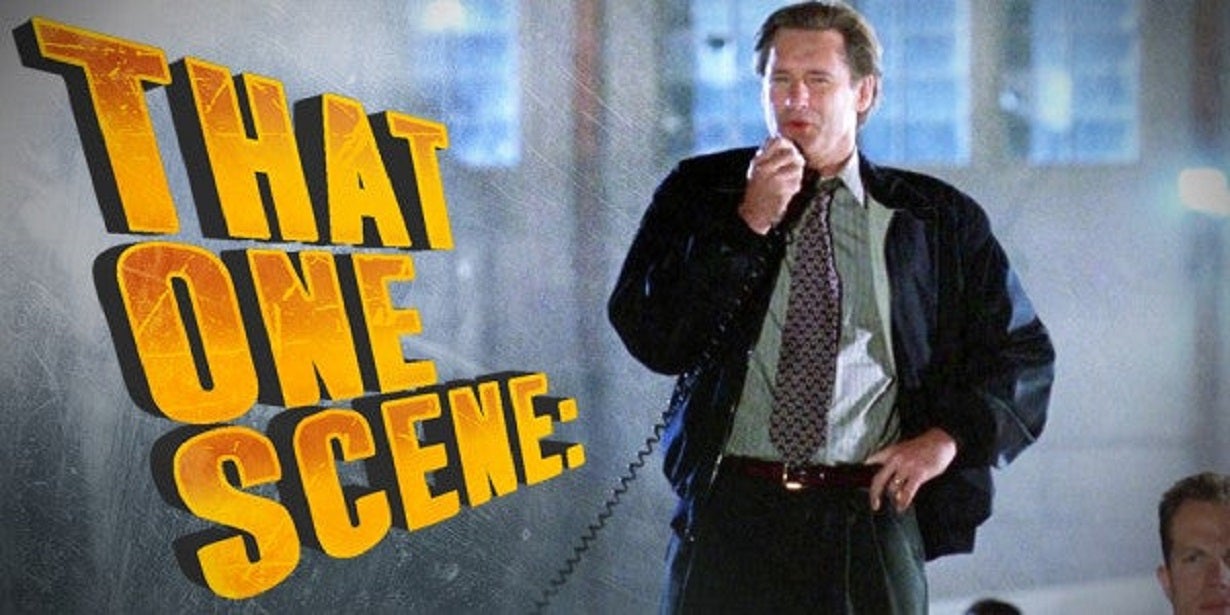 Welcome to That One Scene, a semi-regular series in which Marine veteran and pop culture omnivore James Clark waxes nostalgic about “that one scene” from a beloved movie. (Editor’s note: This article was originally published on July 3, 2018.)

Decades ago, director Roland Emmerich and writer Dean Devlin gave American audiences one of the greatest summer blockbusters of the 1990s. Independence Day helped cement Will Smith’s tenure as a top action star of the decade, gave us another excuse to listen to Jeff Goldblum quip and stutter between raised eyebrows, and delivered a perfect mix of camp and gratuitous destruction at a time when we weren’t so queasy about seeing national monuments laid to waste on screen.

Part doomsday sci-fi romp, part patriotic escapist fantasy, Independence Day had all the trappings of an instant summer classic — and that has a lot to do with one scene in the final act of the film. You know which one I’m talking about:

The scene takes place at Area 51, where the survivors of the brutal alien invasion gather to mount a last-ditch offensive to deliver mankind from the threat of annihilation. When President Thomas J. Whitmore (Bill Pullman), grabs the mic and addresses the beleaguered troops, he delivers the speech we’ve always wanted to hear from an actual president. In fact, if we were ever attacked by a war fleet of extraterrestrials, that scene would probably be required viewing for White House staff, according to former President Bill Clinton’s speechwriting director Michael Waldman.

“I wrote a book that was a collection of great presidential speeches, and if in fact the world had been invaded by aliens, this speech would have made the collection,” he told Complex in a June 23, 2016 roundtable discussion. “So that’s high praise.”

Surprisingly, the iconic scene — and it is iconic, so much so that people have actually delivered it during weddings — was written in just five minutes and was never meant to make it into the final cut as is, screenwriter Dean Devlin told Complex. But it’s a good thing it did, since the scene ends with Whitmore plugging the movie title when he concludes: “Today we celebrate our independence day!” And it turns out, that was deliberate.

“The main reason we did that is ’cause the studio at the time was threatening to change the title to Doomsday,” Devlin told Complex. “So we thought, let’s get it into the speech.”

Not only did President Whitmore rally earth’s defenders for one final push against the alien menace, he also helped secure the film’s title, which is great, because… Doomsday? Are you fucking kidding me?

So, we know it’s good, but why is it so goddamn motivating? Well, partly because President Whitmore is the fictional leader we all wish was real. An actual presidential address under these circumstances would amount to a clipped statement followed by an all but-meaningless executive order given that the world is in flames, the military is in disarray, and we just nuked Houston. Sorry, but no carefully crafted statement delivered from a substitute Resolute Desk will cut it.

Instead, we get Whitmore as commander-in-chief in the very literal sense of the constitutional office. An ex-Air Force fighter pilot and Gulf War veteran, he’s more comfortable in a flightsuit and the cockpit of an F-16 (or an F-18 later in the film) than he is wearing a tie and sitting in a boardroom — something he’s criticized for by cable news hosts early on in the movie. But before personally taking to the sky to kick alien ass for America, and all mankind, he’s gotta rally his troops.

“Perhaps it’s fate that today is the 4th of July, and you will once again be fighting for our freedom, not from tyranny, oppression, or persecution — but from annihilation,” Whitmore says before pivoting to a more unifying message that pays homage to both the St. Crispin’s Day Speech from William Shakespeare’s Henry V, when the titular king rallies his men before leading them into battle, and to the poem, Do not go gentle into that good night, by Dylan Thomas:

“Should we win the day, the 4th of July will no longer be known as an American holiday, but as the day when the world declared in one voice: We will not go quietly into the night! We will not vanish without a fight! We’re going to live on! We’re going to survive!”

If your response to the final lines of that speech was anything but “FUCK YEAH!” and a curious sensation of patriotic arousal, then you’re dead inside. (WARNING: If a moto-boner lasts more than four hours, call your local recruiter — that’ll take care of it immediately.)

And with that, Happy 4th of July. Let’s hope no alien invaders drop by, but if they do, then political leaders the world over should brush up on the finest presidential address in movie history.