The self-styled Islamic State is trying to lure people to fight for the terror group with a scene from The... 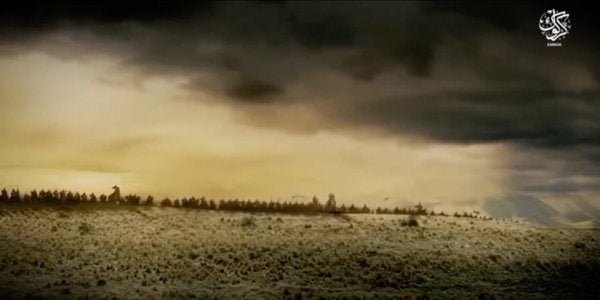 The self-styled Islamic State is trying to lure people to fight for the terror group with a scene from The Lord of the Rings.

In a propaganda video published on Tuesday, bearing the terrorist group's watermark, the group's chapter in Kirkuk, Iraq, used four seconds of footage from the trilogy to encourage followers to “conquer the enemies.”

The clip was taken from 2003's The Lord of the Rings: The Return of the King. It shows the riders of Rohan charging an orc army at the Battle of The Pelennor Fields, but seems to be in the video more as a generic medieval battle scene.

Here's the scene. The part that ISIS repurposed comes around the 2:30 mark:

The ISIS video, which Business Insider has reviewed, then cuts to footage of soldiers on horseback fighting each other, with the voice of an Arabic-language narrator — which was also taken from a Hollywood movie.

That scene was from “Kingdom of Heaven,” a 2005 film starring Orlando Bloom as a French blacksmith joining the Crusades to fight against Muslims for the Kingdom of Jerusalem.

The medieval scenes are spliced in between images of ISIS fighters in the field, and news footage showing President Donald Trump and various news anchors talking about ISIS.

The terror group is fond of crusader imagery, and often frames its battle with the west as a new-age crusade. Its official communications describe routinely describes people from western nations, especially victims of terror attacks, as “crusaders.”

ISIS's use of Hollywood films in Tuesday's propaganda video was first pointed out by Caleb Weiss, an analyst at the Long War Journal, on Twitter.

The Ride of the Rohirrim scene appears to be popular among jihadis. It was also used by the Turkistan Islamic Party, an extremist group founded in western China, Weiss pointed out last year.