The crew of Top Gun: Maverick built a bar on the beach at Naval Air Station North Island in San... 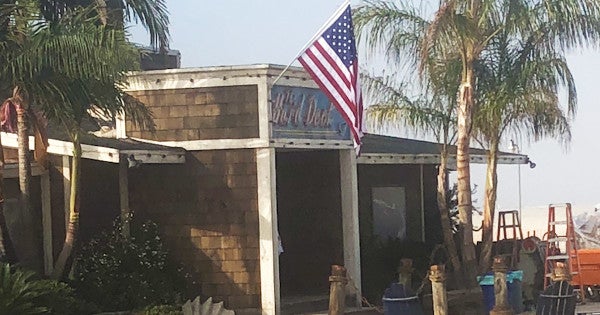 The crew of Top Gun: Maverick built a bar on the beach at Naval Air Station North Island in San Diego, California.

But unfortunately, sailors stationed there can’t pull up a chair and order a round.

The bar — which was quickly erected this month by studio construction workers at the air station’s Breaker’s Beach — has a weathered appearance and features the name “The Hard Deck,” according to photos of the site that were sent in to Task & Purpose. The faux bar is close to the ocean and has beach chairs surrounding its exterior, in addition to an outdoor patio and fire pit.

It’s a pretty-impressive looking watering hole, considering it appeared out of nowhere in less than a month.

Top Gun 2 has been filming at the Coronado air station since May, where Tom Cruise had been previously spotted riding a motorcycle. In July, actress Jennifer Connolly signed on to the film to play a female lead as “a single mother who runs a local bar near the Navy base,” according to The Hollywood Reporter.

Perhaps “The Hard Deck” is it.

Here are the photos: