Why The US Military Should Switch To Hollow-Points

As the U.S. military looks at buying a new sidearm and the unending debate over which handgun is more lethal... 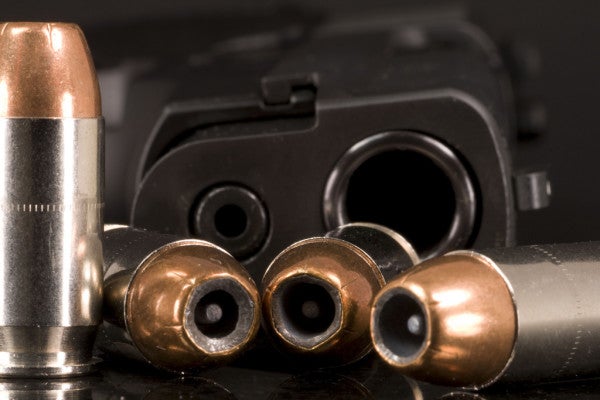 As the U.S. military looks at buying a new sidearm and the unending debate over which handgun is more lethal comes up yet again, there’s a 9mm elephant in the room: What about hollow-points? A study from the Federal Bureau of Investigation concludes that hollow-point handgun rounds are more likely to result in large-wound cavities to vital organs that lead to rapid blood loss, and thus more reliable incapacitation. Multiple firearms instructors contend that 5.56 hollow-points provide greater tissue damage while limiting over penetration of targets and barriers. Even the law enforcement elements have fallen in line with the assertion, and have received authorization to load hollow-points into their duty weapons in response to the Fort Hood and Camp Liberty shootings. Despite these considerations, the military has made little effort to adopt the advances in expanding ammunition, leading to the misguided perception that the U.S. is legally or ethically prohibited from using hollow-points in combat.

The legal argument against the use of hollow-points stems from Article IV, Section 3 of the 1899 Hague Convention, which specifically prohibits “the use of bullets which expand or flatten easily in the human body, such as bullets with a hard envelope which does not entirely cover the core, or is pierced with incisions.” Thirty-four nations to date have ratified this section of the Hague Convention; however, the U.S. only ratified the first three articles of the 1899 Hague Convention. Representatives of the U.S. never signed Article IV, and the Senate didn’t ratify any part of Article IV. Further, Article IV, Section 3 states that the prohibition on the use of hollow-points only applies in a conflict between two signatories; even if the US had signed and ratified it, the provisions wouldn't apply against many current and potential adversaries. A legal fallback is the Saint Petersburg Declaration of 1868, which features similar language prohibiting expanding ammo. But even fewer countries ratified this, and the United States was not invited to participate as the nation was not considered a major power.

Failing a legal prohibition, there’s the notion that the United States, even if not legally bound by Article IV of the 1899 Hague Convention, should follow it anyway in the interest in of international precedent; this was the conclusion of the judges at the Nuremberg Tribunals, who determined that the Hague Conventions were part of the customary laws of war, since all “civilized nations” had recognized them by 1939.

But in the United States’ application of this principle is inconsistent. Historically, the U.S. is willing to go against the grain in terms of international law in the interest of military necessity. A clear majority of United Nation members have signed the May 2008 Convention on Cluster Munitions, which prohibits the use of cluster bombs. The United States didn’t sign the treaty, and amid the signing in Dublin, Richard Kidd, director of the Office of Weapons Removal and Abatement at the State Department, stated that cluster munitions were vital to military operations:

Cluster munitions are available for use by every combat aircraft in the U.S. inventory, they are integral to every Army or Marine maneuver element and in some cases constitute up to 50 percent of tactical indirect fire support. U.S. forces simply cannot fight by design or by doctrine without holding out at least the possibility of using cluster munitions.

Another example is the U.S. attitude on the Ottawa Treaty, which bans anti-personnel landmines. While the U.S. has eliminated most mines covered in the treaty from its inventory, it has kept mines planted in the Demilitarized Zone on the Korean peninsula, citing the unique situation of forestalling an attack by North Korea on South Korea.

It’s hard to argue that the U.S. follows international law precedent regarding certain conventional weapons. The U.S. has even begun to skirt the Hague Convention’s rules on bullets, with rounds like the 5.56mm Mk 138 Mod O, which sports an open-tip design. If the U.S. is willing to find exceptions for mines and clusters bombs, why not hollow-points, which are considerably less destructive than the former two weapons?

Domestic realities play a role as well. Hollow-points are the preferred load for most law-enforcement handguns, as well as general civilian use. Indeed, many ammo manufacturers who sell hollow-point bullets market them as “defensive” and “law enforcement” loads. If hollow-points have a legitimate place in law enforcement and self-defense shootings, it’s difficult to see why U.S. forces cannot employ hollow-points in combat.

The final consideration is whether or not hollow-points are humane; after all, the main purpose of the Hague conventions was to regulate methods of war considered unnecessarily cruel. That is a difficult question to answer. The most-readily understood laws of war are those that deal with battlefield conduct, such as the treatment of prisoners, or the causes of legitimate war. Then there’s the moral threshold regarding weapons of mass destruction; the use of chemical and biological agents has been almost universally condemned, and few nations desire to let the nuclear genie out of the bottle. But in the conventional weapons space, things are less clear. What is and isn’t humane? What purpose does a particular weapon serve? There are numerous cases of weapons systems being employed outside their intended role. The 30mm GAU-12 Avenger cannon mounted on the A-10 Warthog was built as a way to shred enemy armor columns, but it was commonly used in Iraq and Afghanistan to engage enemy personnel. The A-10 fires two types of 30mm rounds: depleted uranium and high-explosive incendiary. Is the use of the A-10’s guns on personnel considered inhumane? Under the laws of war and current international norms, no. The same goes for cruise missiles, fuel-air bombs, thermobaric weapons, tank rounds, anti-tank guided missiles, and anti-aircraft cannons; all these weapons wreak dramatically higher levels of devastation on the human body than hollow-point, small-arms ammo.

Of course, hollow-points are not the end-all, be-all of small arms ammunition. Standard full metal jacket “ball” ammo still has a role; it’s better at penetrating barriers, and is much more effective than hollow-points against personnel wearing body armor. But the hollow-point rules on the asymmetric battlefield of today. Theses are the types of combat where the fighting is close, in urban areas, and among civilians; and where hostile forces aren’t wearing armor, but may be taking amphetamines, adrenaline, khat, or other narcotics.

American troops should be equipped with the best tools possible; and there’s no reason why hollow-points shouldn’t be in the military toolbox.