We may earn revenue from the products available on this page and participate in affiliate programs.If you purchase something through... 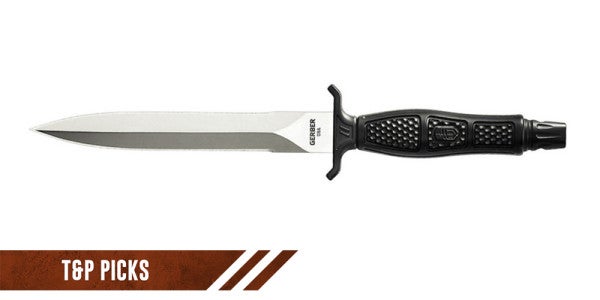 The Gerber Mark II combat knife really needs no introduction, but here’s one anyway: Ever since U.S. Army Capt. Bud Holzman dreamed up his own interpretation of the spear point from the famous Roman Mainz Gladiusshort sword, his 6.5-inch fighting blade has accompanied thousands of U.S. service members downrange — especially during the height of the Vietnam War. Although U.S. military exchanges apparently stopped selling it at certain points, the Mark II remains synonymous with elegant lethality.

More than 50 years after Holzman first unveiled his design, Gerber is paying tribute to the Mark II with a sophisticated interpretation of the classic blade in the G1-002 limited edition fixed blade knife.

Yeah, spin for me baby, don't you wanna be a star?Gerber

The second installment in the company’s G1 Series, produced with the help of the bladesmiths at Zev Technologies and Blackpoint Tactical, the G1-002 is hand-assembled from S60V steel and set in a custom-machined Cerakote-coated handle.

Now, at $400 a pop, the Gerber G1-002's 100-blade limited production run is fairly pricey, even for the most avid blade man. Luckily, there’s a standard version of the Gerber Mark II on Amazon for the low, low price of $79, marketed for “combat and survival applications” — as though those two things are mutually exclusive.