There are some things vets and civilians alike just have a soft spot for, like the Vietnam-era jungle boot: light... 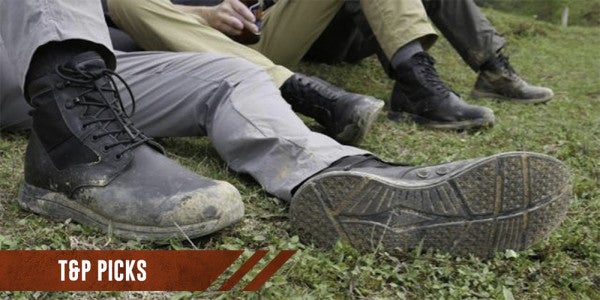 There are some things vets and civilians alike just have a soft spot for, like the Vietnam-era jungle boot: light compared to their World War II predecessors, soft and quiet, and not bad for going fast and hard in punishing climes. Or like the GR1, the venerable staple of athletic company GORUCK’s line of packs and sacks; founded by Army Special Forces veterans, GORUCK has helped make rucking the most accessible fitness activity since jogging.

Wouldn’t it be great if GORUCK made a boot to match its bags? Maybe one co-designed by the brains behind the iconic Reebok Pump and a living, breathing Special Forces veteran who returned to Vietnam for the first time in 45 years to make this pair of ass-kickers a reality?

GORUCK’s MACV-1 is a lightweight but surprisingly solid black boot made from durable full-grain leather inspired by the Vietnam-era jungle boots that members of Military Assistance Command, Vietnam – Studies and Observations Group (MACV-SOG) adopted with the preferred “Panama sole” to shed weight and expel mud without sacrificing toughness. But GORUCK’s boot is also modernized for modern training and traveling, thanks to dual density Workhorse inserts and 1000D Cordura uppers, and special debris-averse laces.

“The boots I used during my Special Forces Qualification Course were the same style as those Vietnam-era jungle boots that have been in existence in one form or another for decades, but I modified the bottom units to make them more like an athletic sneaker,” he said. “This is a big part of the trend we continued with MACV-1. The nature of SF is to be as light as possible, to sharpen the tip of the spear on everything.”

The uppers and style of the MACV-1 “are similar to the Vietnam-era jungle boot,” he added, “but at every turn, all we wanted to do was remove as much extra weight as we could.”

The MACV-1s came together after McCarthy encountered two critical influences on the project: Paul Litchfield, the legendary shoe designer who gave the world the beloved Reebok Pump; and Richard Rice, a 30-year Special Forces and MACV-SOG veteran whom McCarthy encountered by chance at a GORUCK event years ago and added a critical level of insight to the project.

“These are better than any boots I wore in my 30-year Army career spanning jungle, desert, mountainous and urban warfare,” Rice said. “And when the mission’s over, you can drink in ‘em, too.”

GORUCK’s boot project didn’t fully start to take shape until the trio traveled to Vietnam. The trip served some business purposes — the company relies on a Saigon factory that churns out 4 million pairs of shoes a month — but it was also something of a spiritual journey for the two Green Beret vets and their so-called “shoe dog” in Litchfield. Rice himself hadn’t returned to the country since his deployment there with MACV-SOG.

“I always wanted to wave the American flag in North Vietnam,” Rice said. “I didn’t think it would take me 50 years, but we did it for everyone who fought, and for everyone who didn’t come back.”

“We had a lot of freedom on this project, the kind of freedom you never have at a big shoe company,” Litchfield said. “The freedom to spend four years on one boot, the freedom to product test in some of the world’s harshest environments, the freedom to never talk about reducing our standards to hit a certain price point, the freedom to not work with people who form their opinions in spreadsheets.”

“All we had to do was focus on the fundamentals of footwear and keep refining them until there was nothing more to remove,” he added. Every project should take four years if it leads to an outcome like MACV-1.”

It’s worth noting that the MACV-1s aren’t by vets, for vets. McCarthy founded GORUCK in part to help make rucking a mainstream athletic activity in a country that other Special Forces vets like MMA fighter Tim Kennedy have decried as soft and lazy.

“It's putting weight on your back and going for a walk,” McCarthy jokes, calling rucking “the most accessible form of fitness other than running, and it’s the foundation of Special Forces training in the pantheon of athletic activities.”

McCarthy hopes that the MACV-1, like everything GORUCK does, will help provide vets with a familiar activity as they transition back to civilian life — and, more broadly, help bridge America’s civil-military divide by creating a community around purposeful living.

“There are many of us who answered the call after 9/11, but it’s because we needed a task and a purpose,” he said. “Americans will always answer the call, and I believe there’s a way of life that we can help promote that will help inspire more Americans to be more than they already are, to work towards something larger than themselves.”