Why Some Of The Most Hardcore Warriors In History Practiced Meditation

There is no surprise that the samurai class in Japan took to the practice of Zen meditation. It blended nicely … Continued 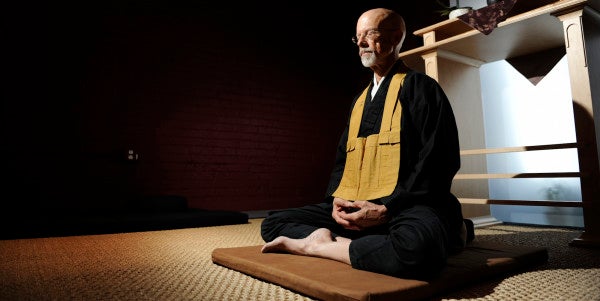 There is no surprise that the samurai class in Japan took to the practice of Zen meditation. It blended nicely with the needs and values of their militaristic lifestyle, particularly in dealing with the issue of facing death, but also more broadly with its inclination toward orderliness, self-discipline and focus — very useful tools in training for the martial arts.

According to D.T. Suzuki, one of the greatest proponents of Zen Buddhism in the West, Zen appealed to the warrior with its insistence on moving forward 100% once a course of action has been decided upon. In other words, the warrior, either on the battlefield or on the training ground, does not let doubt or fear get in the way of the successful completion of an objective.

In samurai culture, the greatest warriors were expert swordsmen. Those who trained in Zen sought a state of no-mindedness. In Zen, the empty mind is the free mind and for a swordsman in the midst of combat an empty mind freed him from doubt and fear and the need for calculation or concentration on technique. Of course, they all trained constantly, seeking out the greatest teachers, but once real combat began all thinking departed and the purity of action took over. It is not something that can be learned in a day, but rather requires a life-time of dedicated practice in both zen meditation and swordsmanship. One can do without the other but together they create a formidable synthesis.

In the military, service members are taught to consider all options before they act, to gather as much intelligence as possible and to try to completely understand the opponent right from the beginning. To the Zen mind, too much thinking leads to doubt and paralysis, especially to someone in the middle of mortal combat. Better to move resolutely forward, forget one’s ego, and complete the task at hand with the least amount of analysis and reflection.

With respect to death, Zen can become very controversial. For the Zen-trained warrior, death is not something to be feared as that fear can cause the type of paralysis which can be devastating to someone who experiences it. When we face an enemy and we fixate on the enemy instead of on our training, the mind gets captured by the enemy even before the combat begins. In everyday life, if we fixate on our problems or on the behavior of others, our mind gets captured by these things and we are no longer free to act autonomously. For the Zen-trained warrior, the thought of death is almost irrelevant. Victory or defeat are two sides of the same coin. Colleagues and foes are considered equal. Maintaining your zen attitude is the most important outcome. Fist-pumping your victory or disrespecting the enemy in his defeat are to be avoided.

Meditation does not make problems go away; it allows us to face them with a completely different attitude. Meditation has nothing to do with finding God or traditional religious awakening, but it has everything to do with understanding how the mind works and how we can become more enlightened and effective people by the practice of overcoming our own egos and the inherent weaknesses of our personalities.