The production of the 1986 action flick Iron Eagle was not supported by the U.S Air Force, for obvious reasons. The script,... 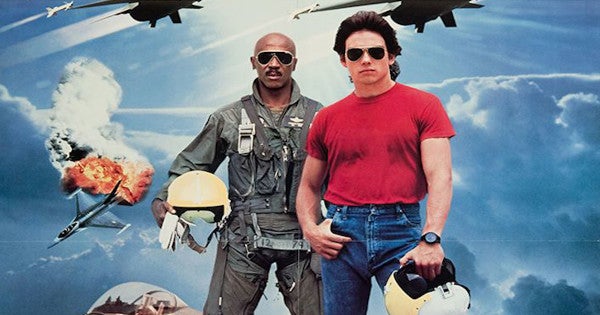 The production of the 1986 action flick Iron Eagle was not supported by the U.S Air Force, for obvious reasons.

The script, likely pitched as a mix between Back To The Future and The Last Starfighter, involves the children of service members stealing classified intelligence, sabotaging supply chains, and setting off a chain of events that led to an Air Force brat stealing a multi-million dollar aircraft from dimwitted airmen and massacring several dozen people in a fictional North African nation.

Somehow, this ramblin' wreck of an aerial Ocean's Eleven was a modest box office success when it premiered and a commercial nothing-burger despite home video success that led to three Louis Gossett Jr. filled sequels.

How did Iron Eagle even make it to production? Luckily, there was a nation willing to bring this partially-true story of international affairs gone wrong to the masses: Israel.

These two are in a room filled with items labeled 'Recon'

The Israeli air force played the role of both the U.S. Air Force and the fictional country of Bilya during production of the film. Finding a fighter jet to play the bad guy is never an easy task — just ask the producers of Top Gun. But luckily since the film was shot in Israel, IAF Kfir fighters really fit the role of high-flying fodder for Doug Masters to kill over and over again.

No one on the controlled flight line would dare to tell Doug Masters that his hair is out of regs.TriStar Pictures

But despite this silver lining, Iron Eagle portrays the Air Force as an incompetent, bloated bureaucratic entity that lucks out in having the best fighters that money can buy. The killer soundtrack featuring Queen gives this film a rocket booster of nostalgia, but the spaceship rapidly crashes into a mountain as none of this makes any sense.

Doug Masters kills a lot of foreign nationals, including the Minister of Defense of the sovereign state of Bilya. If anything approaching this ever happened in real life the congressional inquiries would make Benghazi look like a city council hearing.

The chief of staff of the air force would be removed, every officer from the wing king on down would be retired with full retirement benefits, and then they would send the enlisted that fucked up to jail for 20 years to do hard labor with Rambo.