“What would be the hardest place to ‘come and get it’? Space.” 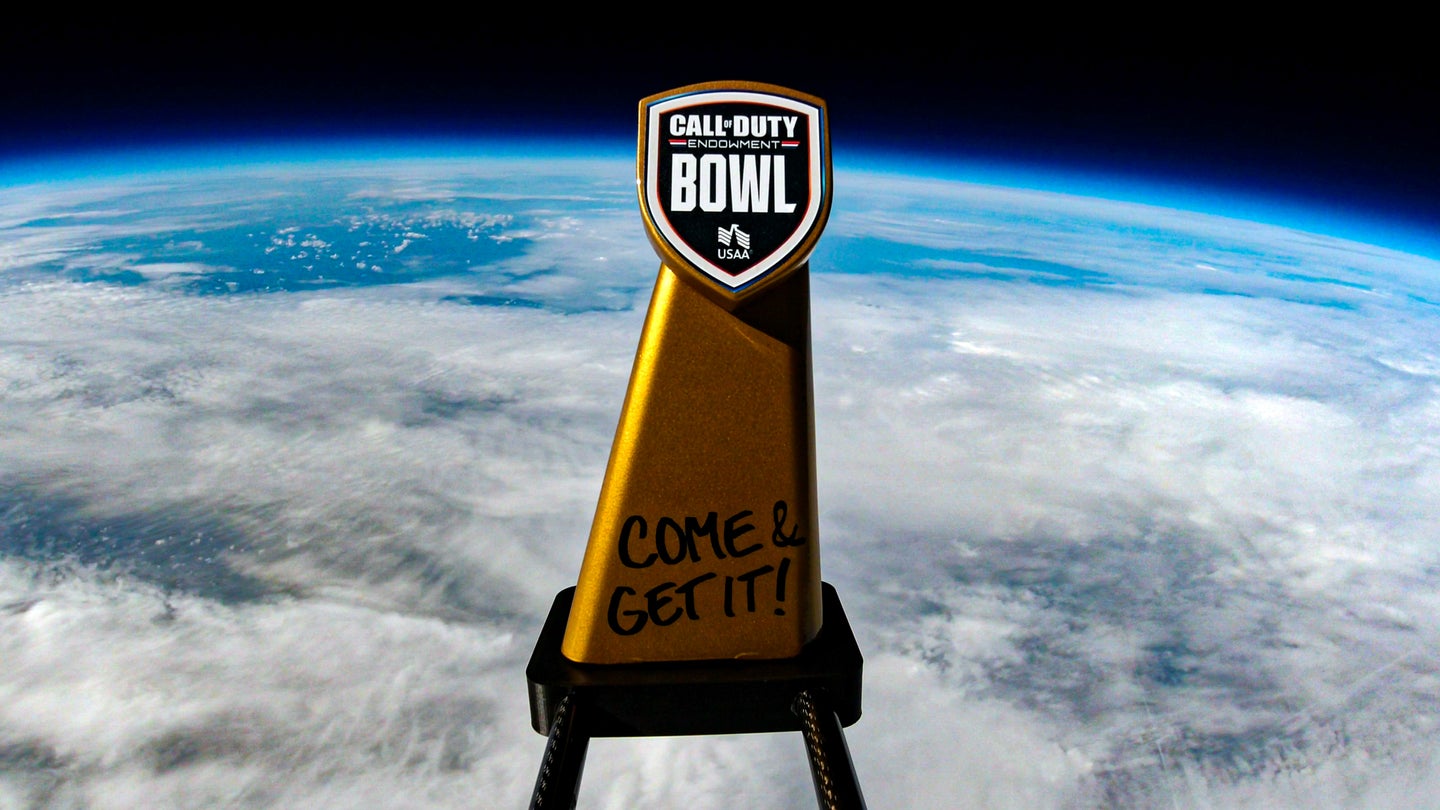 Many sports trophies end up on shelves or in glass cabinets, but the trophy that the Space Force esports team received last year after winning the second annual Call of Duty Endowment video game tournament achieved the ultimate high ground when it was sent on a three-hour trip above the planet’s atmosphere earlier this year.

“We just thought, how cool is it that this brand new service won its first inter-service competition, and what’s unique about this service?” said Dan Goldenberg, executive director of the Call of Duty Endowment, a nonprofit for helping veterans place into high-quality jobs.

CODE hired a private contractor based in the United Kingdom to launch the trophy into space earlier this year. The term “come and get it,” which has been used by soldiers and sports teams across the ages, was scrawled across the trophy’s base.

“What would be the hardest place to ‘come and get it’? Space,” Goldenberg said.

Footage of the trophy in space was featured in a new promotional video the endowment released ahead of its third CODE Bowl on December 16 in Raleigh, North Carolina. Like last year, the Bowl will feature teams from the U.S. Air Force, Army, Marine Corps, Navy, Coast Guard and Space Force, as well as the British Army, Royal Navy and Royal Air Force.

The Space Force is the reigning champion for two years running, and guardians hope to make it a three-peat.

“If you think the trophy’s still within reach, think again,” says one guardian in the promo video, which was filmed with actual Space Force members at Los Angeles Air Force Base, before the video cuts to a shot of the trophy in orbit.

“I come from the Naval Academy class that, how should I say it, borrowed all four of Army’s mules, so I was steeped in how to do these pranks,” Goldenberg added.

There were some fears that the trophy would not survive the dramatic temperature and pressure changes involved in trans-atmospheric flight. Luckily, it came back to Earth intact — and Space Force Master Sgt. Mike Sullivan, the founder of the Department of the Air Force’s gaming team, hopes to say the same thing about the Space Force’s win streak despite fierce competition from the other services.

“The Space Force has a lot to fight for holding onto this trophy” he said. “It’s going to come down to game day.”

One of the things to fight for is a well-deserved chip on the Space Force team’s shoulder. The service is the newest and smallest of the U.S. military branches and many Americans don’t even know it exists. The branch has even more underdog charm because the U.S. Army and Navy have full-time esports teams, whereas the Space Force guardians all have day jobs.

“Anything can happen, right?” said Goldenberg. “You’ve got the Army and the Navy with full-time amazing teams, and here comes this up-start Space Force team and they take it all. Anything can happen, it’s kind of the way college football used to be. You never knew how it was going to come out.”

You may be surprised by how many world-class gamers serve in the U.S. military. For example the Air Force has Airman 1st Class Allyson Stephenson (Tag: CommandStation), who placed 7th at the 2022 Halo Infinite World Championships Free For All. For perspective, there are more than 20 million Halo Infinite players worldwide. That skill level paid off in May, when the Air Force crushed its fellow services in Halo Infinite at FORCECON 22, the Department of Defense’s first official gaming championship. CommandStation was named MVP of the tournament.

“The Air Force swept the floor of all the branches during that event,” Sullivan said.

Any civilian or uniformed member of the Air Force and Space Force can try out for those service’s CODE Bowl teams, Sullivan explained. The preliminary round of try-outs takes place in three regional competitions held around the world. Professional Call of Duty players then grade the winners of those competitions based on their solo play, teamwork, map awareness, communication skills, reaction time, accuracy and other factors. The top four candidates are then selected to form the service CODE Bowl teams, though each team in the competition also features a professional civilian player like Symfuhny, who helped the Space Force pull off a narrow victory over the Royal Air Force in the 2020 Bowl.

“They all carried their own weight, they were super good, they were nice, they were fun to play with,” Symfuhny said at the end of the 2022 bowl. “It was good vibes all around, I had a great time.”

Still, this year’s CODE Bowl is anyone’s game. Sullivan said the biggest threat to the Space Force threepeat comes from the U.S. Army, which has a solid record of placing on the podium during the past two tournaments.

Whatever happens, more than a million people will likely tune in to see it. Last year, the tournament drew 1.7 million viewers, Goldenberg said (For comparison, 7.57 million viewers watched the 2021 Army-Navy football game).

Goldenberg said the CODE Bowl builds off the inter-service rivalry that makes the Army-Navy game so entertaining, but video games may draw an even larger crowd within the military.

“We were inspired initially to do this whole thing by the Army-Navy football game,” the director said. “The goal is to build upon that. This a new medium, a new type of competition that appeals to a very broad range of folks and the military force. It’s one of the wonderful things about video games: anybody can pick up a controller. It doesn’t matter where you serve or what your rank is.”

About 25 million people play Call of Duty Warzone 2.0, said Neil Wood, president of the public relations company Step 3, which represents Activision Blizzard, the company that produces Call of Duty. “The scale of the Call of Duty franchise really does reach pop culture.”

Call of Duty’s popularity also makes it an effective way to engage with the population that the Call of Duty Endowment is designed to serve: veterans looking for a job. The endowment awards grants to organizations with a proven track record of helping place vets in quality jobs after the service.

One of the ways CODE raises money for grants is through in-game purchases like weapons packs, some of which have been very successful. For example, the recent Protector pack costs $9.99 each, and Call of Duty had to stop selling them because it reached its cap fundraising goal of $4 million, Wood said. The endowment also raises money through corporate partnerships and through the CODE Bowl, which raised more than $900,000 in 2020.

Professional career help can make a big difference. For example, if an 18-year-old joins the military and gets out five or six years later, they may not know how to translate their military experience in a way that civilian employers will appreciate.

“They talk in military terms, and the hiring manager does not do that,” Wood said. “If you don’t ask for help, your resume is probably not going to make it past the first look. One of the key things we always mention to people is if you’re transitioning out of the military, your first step is asking for help on how to go about navigating employment in the civilian world.”

Veteran unemployment or underemployment is still a problem in the U.S. About 2.5% (224,000 people) of all veterans were unemployed in October, according to the Bureau of Labor Statistics. That rate is lower than the overall population unemployment rate of 3.7%, but it does not cover the number of veterans who may be working in jobs for which they are overqualified. Sixty-one percent of veterans were underemployed between 2016 and 2019, according to Penn State research.

“If you were in command of 30 people in Afghanistan and now you’re driving an Uber, you’re underemployed,” said Wood.

The concern about underemployment is why the endowment emphasizes placing veterans in quality jobs, not just any job. In its press materials, the nonprofit points out that the average starting salary for the 110,000 veterans it has placed into jobs so far is $64,000. That is about $5,000 higher than the median salary for 25 to 34-year-old full-time employees with a bachelor’s degree, according to Forbes. Goldenberg pointed out that higher-quality jobs help protect against other issues that often affect the veteran community, such as health problems, homelessness, and drug abuse, because they often provide better health insurance, stability, and financial security.

“If you can get a veteran in a job when they’re transitioning, so many other things go right,” he said. “But if you don’t have a good job after you leave, so many things can go wrong.”

Playing video games used to have a reputation for being the opposite of productive, job-securing behavior. The 2022 CODE Bowl may be the latest chance to not just highlight how video games can create better opportunities for veterans, but also to celebrate the military coming together for something so many service members have in common: popping virtual caps into each other over a few rounds of team deathmatch.

“Everyone looks forward to the Army-Navy game every year, so will there be an esports equivalent?” asked Sullivan. “I think so, I would like to think that maybe CODE Bowl will be something that sparks that and makes it even bigger.”