The Satanic Veterans Memorial is looking for a new home after the town of Belle Plaine, Minnesota (pop. 6,900), where... 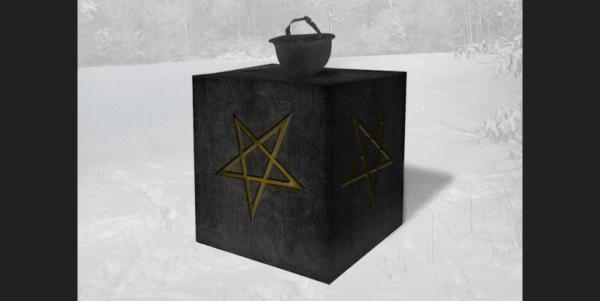 The Satanic Veterans Memorial is looking for a new home after the town of Belle Plaine, Minnesota (pop. 6,900), where it was slated to be installed in the one-acre Veterans Memorial Park, abruptly rescinded its plan for a free-speech zone. The special area was designed to allow a Christian-themed memorial to remain on the site following a legal challenge, but it would also have authorized a variety of other private veterans monuments, including a contribution from the Satanic Temple.

The reasons cited for the legal change included fears that the forum might “encourage vandalism,” “reduce the safety, serenity, and decorum of the Park,” and “negatively impact the public’s health, safety and welfare.”

The resolution was quietly approved without debate late Monday night.

“There’s an element of disappointment, but it makes perfect sense, given the issues around the state representation of religion,” said Chris Andres, the New Mexico-based artist who designed the Satanic Veterans Memorial. “It's a rational decision. If there's too much dissension, let’s not display religious imagery on state property.”

The memorial that sparked the original controversy was created by Joseph Gregory, an 87-year-old Army veteran and Belle Plaine resident who died shortly before his statue was removed. Entitled Joe, it depicts a silhouette of a soldier kneeling in prayer over a grave marked with a cross. The appearance of a religious symbol in a public park drew the attention of the Freedom From Religion Foundation, which said the artwork violated the First Amendment’s prohibition on religious favoritism.

Joe’s removal sparked a heated backlash from some residents, and in response, the town came up with a legal workaround that also drew on the Bill of Rights, designating a small space in the park as a “public forum area” in which any group could apply to place a monument honoring veterans. The Satanic Temple — an atheist organization that does not worship the devil or any supernatural being — quickly submitted its plan and hired Andres to create the memorial.

The move recalled the group’s petition to install a nine-foot bronze statue of the goat-headed deity Baphomet, flanked by adoring children, on the grounds of the Oklahoma State House near a display of the Ten Commandments — an effort that was abandoned after the State Supreme Court ordered the original religious display removed. More recently, the temple declared its intention to install the Baphomet at the Arkansas State House, where another Ten Commandments monument was erected in June. (The plan appears to be on hold after an Arkansas man rammed the marble commandments with his car, smashing it to bits.)

Although the small town’s governing council initially approved the occult monument — “To their credit, Belle Plaine offered no resistance at all,” Satanic Temple founder Lucien Greaves told Vice — their misgivings grew as the proposal drew national attention, culminating July 15 in a pair of demonstrations, for and against Andres’ memorial.

As for the monument itself, it actually takes a relatively sedate and tasteful approach, especially in comparison to the more provocative Baphomet statue. According to Andres, that was intentional. “It needs to be unimpeachable,” the artist told Task & Purpose by phone from his home in New Mexico. “It has to have the right tone. It's a memorial. And that requires sobriety and reverence.”

Not everyone is Christian, Andres added. “There's room for all of us, but some of us just don't want to share. Veterans defend the Constitution so we can all have our liberties.” The piece, he said, is meant to honor those service members who don’t identify as Christian or as well as those who simply understand that the Constitution they have sworn to defend draws a sharp line between church and state. “I think anyone who trivializes the memorial or calls it an obscenity is really missing the bigger picture of what veterans are about, what our country is about, with the First Amendment is about and what honor is about. They're missing the point.”

Fabricated by metalworker Adam Volpe, the piece, which would have been “the first Satanic monument to be erected on public property,” according to the Satanic Temple, is a small black steel cube, just under two feet square, decorated on each side with a golden inverted pentagram and topped with an upside-down combat helmet. The use of black metal represents a void, Andres said, and the gold is designed to reflect light onto the viewer, like a religious icon. “It’s a sort of Luciferian light, but it still represents the hope that people carry with them.”

Andres pursued his graduate studies at the University of Notre Dame, the prestigious Catholic institution, which, despite the occultic and sexual themes already present in his work (one piece depicted a castrated Jesus), awarded him a scholarship and tapped him to teach introductory courses in photography. “I had a blast,” he said of grad school. “It was fantastic.” Though several male nudes were ordered removed from his graduate thesis show by school administrators, the exhibition won him a scholarship.

In crafting the memorial, Andres drew on his relationships with service members, including his father, an Army veteran, and two older brothers, one of whom did multiple tours with the Army in Iraq and Afghanistan and another who served in the Navy. He also thought about his art students, a number of whom have been veterans or active-duty service members, struggling to reconcile the military’s insistence on cohesion and authority with the more individualistic creative expression demanded of a fine art course.

Andres also took inspiration from minimalist sculptors like Richard Serra and Tony Smith, and perhaps most of all from Maya Lin, who designed the Vietnam Veterans Memorial for the National Mall. While that piece that was also highly controversial when Lin, then a 21-year-old undergrad, was awarded the commission, it has since become one of the nation’s most beloved works of public art and memory.

Like that now iconic work, the Satanic memorial “is about loss, ultimately,” the artist said. “It’s about people — life, death, loss, service, and our country. And the question is what's the most appropriate way to do this and still show that veterans are just as diverse as the people they serve? To show them only within one belief system, that would be inappropriate and I think dishonorable.”

The artist, whose other work ranges from handmade horror-kitsch figurines (available on Etsy) to disconcerting photographic explorations of taboo sexuality and religious symbolism, considers himself a Satanist. But he defines the ideology — as do other adherents of the Satanic Temple — a non-theistic philosophy that borrows the power of Satanic imagery to make a statement favoring rationality and humanism over superstition and blind faith. “We believe we must embrace pleasure to be fully human and rebel against any kind of persecuting Church authority,” he explained.

Andres’ experience with religious authority goes back to his childhood in Las Cruces, New Mexico, where he attended church five or six times a week and even preached the gospel himself as a teenager. “You would just walk up to people in the ghetto and say, ‘Have you heard about Jesus Christ?’” he recalls. “Our mission was saving the entire world.” He also played saxophone in the church band, appeared in several morality plays (once as Satan), and occasionally spoke from the pulpit on Sunday mornings.

“I wanted to introduce prophecy because that was something people seemed to be hesitant to talk about,” he said. “I tried to make that my thing.”

An early sketch of the Satanic Veterans Memorial.

Meanwhile, Andres was struggling to come to terms with being gay. “You realize you have this nature inside yourself,” he said. “And you learn how to suppress it or deny it, or later, try to pray it away. I was pretty slow to realize, ‘I have these feelings. Maybe I should start embracing what I am and who I am.’”

That experience informs Andres’ veterans memorial, which is meant as a reminder that America is a diverse country and that while many Christians serve in the armed forces, so do members of other religious groups, as well as those with no spiritual inclinations at all. According to a survey by the Military Leadership Diversity Commission, more than a quarter of active-duty service members identify themselves a nonreligious. Indeed, troops are somewhat less likely to declare a religious affiliation during their service than at the time of enlistment.

“I know the diversity that's in the veteran pool,” Andres said. “They're just like everyone else. Artists are just people. Veterans are just people. They're messy. They’re diverse. Hopefully the Satanic Monument will help show that they're not all the same. We all deserve to see ourselves reflected in our society — especially those that defend our society. They deserve to be shown.”

The U.S. military currently recognizes 221 distinct faith groups. The list includes somewhat arcane affiliations such as Rosicrucianism, Asatru and Troth alongside major religions like the Southern Methodist Church, the Roman Catholic Church and Islam (although someone might want to let the military know there are actually several denominations of the latter).

So far, the Satanic Temple has yet to make the cut.