Healthcare, the economy, reproductive rights: what matters most to veterans in the midterm elections

The veterans community is not a monolithic group, and while vets are united on some issues, others continue to prove divisive. 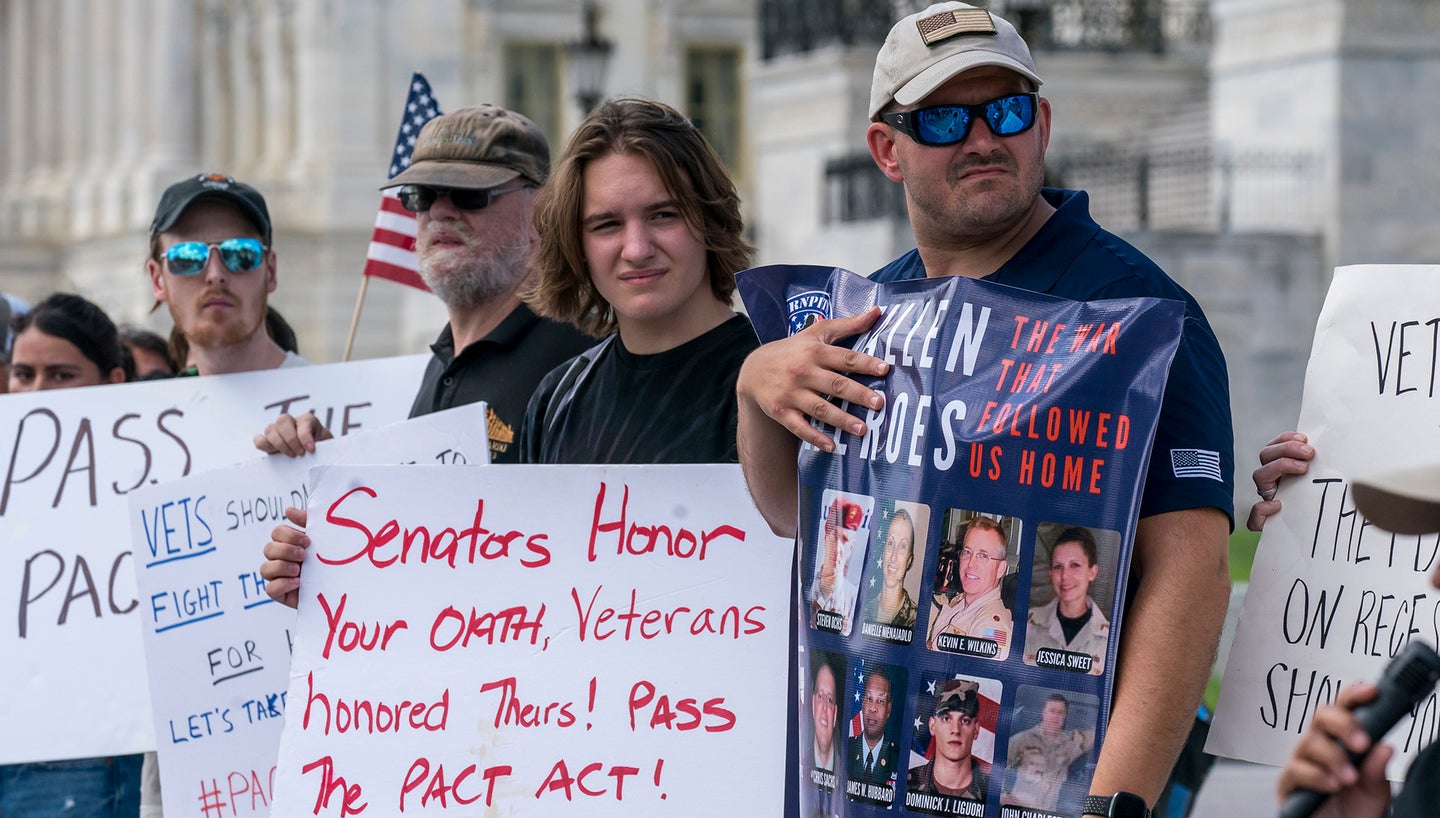 Veterans, military family members and advocates call for Senate Republicans to change their votes on a bill designed to help millions of veterans exposed to toxic substances during their military service, at the Capitol in Washington, Monday, Aug. 1, 2022. (J. Scott Applewhite/Associated Press).
SHARE

The upcoming U.S. midterm elections allow veterans and their families to make their voices heard on a unique set of concerns that Americans who have not served in the military may neither understand nor appreciate.

While the veterans community is not monolithic and individual veterans are represented across the political spectrum, there are a number of issues facing veterans that transcend any political divisions, said Tom Porter, who runs the Washington, D.C., office for Iraq and Afghanistan Veterans of America.

Those issues include taking care of veterans who are now sick due to their exposure to burn pits and other toxic sources, ensuring that female  veterans get fair treatment from the Department of Veterans Affairs, finding new ways to reduce veterans suicides, and protecting G.I. Bill benefits from any spending cuts, Porter told Task & Purpose.

This election cycle, veterans are concerned about how Congress will provide oversight of the recently passed PACT Act, which extends VA health benefits to veterans who were sickened from toxic exposures, he said.

“So many people think that when you pass something into law that it’s done,” Porter said. “Well, that’s really when the hard work begins because as you’ve probably seen in some of the major reforms of recent years – the MISSION Act, the Forever G.I. Bill – all huge reforms, but all had big hiccups in implementation.”

Congress passed the MISSION Act in 2018 to allow veterans to get healthcare in the private sector that the VA would pay for, but the RAND Corporation determined that month that veterans may not be saving time or money by going outside the VA system.

Another issue that my prove potentially important to veterans this year is getting Congress to pass the Afghan Adjustment Act, which would provide a pathway for Afghans evacuated from Kabul last year to become permanent legal residents in the United States, he said.

Many American veterans were traumatized by Afghanistan’s collapse in August 2021 and volunteered to rescue Afghans who had worked for the U.S. government, Porter said.

“We have some members right now that are out on the road —  it’s like a traveling roadshow,” Porter said. “They’ve been going around the country, going to Senate offices, meeting with members of Congress and their staff to ask them to pass the Afghan Adjustment Act.”

For the Veterans of Foreign Wars, the biggest issues for this election are the same as they are for every election: Ensuring that elected leaders provide veterans with the healthcare and benefits that they deserve, said VFW spokesman Rob Couture.

The VFW also advocates for veterans to be taken care of when they return home from deployments, and that means ensuring that National Guardsmen and reservists still have their jobs after their mobilizations end, Couture told Task & Purpose.

“Before any legislator, before they vote yes to involving our sons and daughters in another conflict, they need to count the full cost, and that means taking care of them when they return home,” Couture said.

Wounded warriors are an honored category of veterans, and they face a set of specific needs. Members of Disabled American Veterans are particularly concerned about the VA finally renovating their aging facilities and updating veterans’ health records so they can be sent electronically, said Joy Ilem, DAV’s national legislative director.

Service-disabled veterans who live in rural communities are also facing continued challenges finding VA facilities where they can get healthcare, she said.

Some of the issues that veterans find important this election cycle are not unique to the veterans community. Like many Americans, members of Concerned Veterans for America, a conservative veterans group, are concerned with the state of the economy, said John Byrnes, CVA’s deputy director.

In addition to worrying about inflation and high fuel prices, CVA members also feel the Biden administration is spending money on Ukraine that could have been used to fund veterans healthcare, Byrnes told Task & Purpose.

Congress has approved about $65 billion in funding for Ukraine since February. House Republican Leader Kevin McCarthy has vowed that lawmakers will not provide Ukraine with a “blank check” if his party takes control of the House of Representatives.

“It’s been a historical pillar of CVA’s policy when it comes to the economy that continued growth of the debt is problematic,” Byrnes said. “We’ve been saying since way back in 2012 when we started out, we agreed with former Chairman of the Joint Chiefs of Staff Adm. Mike Mullen that the debt continues to be the greatest threat to national security, and this is something that is reflected in our policy agenda every year.”

But the U.S. government’s assistance to Ukraine is an issue that divides the veterans community.  Members of VoteVets, a liberal veterans group, believe that helping Ukraine is vital to U.S. national security, said group chair Jon Soltz.

“There is a very strong interest in continuing to support Ukraine in its war against Putin, not least of all because they realize that if Putin continues on through Ukraine and into NATO territory, it could lead to another world war,” Soltz told Task & Purpose. “There is an ally willing to fight to prevent that, and veterans we talk to strongly support continued aid to Ukraine.”

The upcoming elections will mark the first time that voters have gone to the polls since the Supreme Court overturned Roe v. Wade, which had established a constitutional right to abortion.

The veterans and military families represented by VoteVets are extremely concerned about how the Supreme Court’s action will affect the ability of female service members to stay in the military if they are assigned to bases in states where abortion is now illegal, Soltz said.

The Pentagon has vowed to provide travel allowances for troops who need to travel out of state for abortion care.

In his opinion concurring with the Supreme Court’s decision to overturn Roe v. Wade, Justice Clarence Thomas wrote that the court should also reconsider its 2015 decision recognizing same-sex marriages.

That is why marriage is a major issue for gay and lesbian veterans this year, said Jennifer Dane, executive director of the Modern Military Association of America, an organization for LGBTQ veterans, service members, and military spouses.

Should the Supreme Court overturn the federal recognition of same-sex marriages, gay and lesbian service members and troops could suddenly find themselves living in states where their marriages are no longer legal, Dane told Task & Purpose.

“We have to inform our members what to do if that does happen,” Dane said. “Making sure they have power of attorney. Making sure their children are safe. They’re still parents of those children if their marriage is no longer legal and they don’t recognize them as their parent.”

For veterans who come from minority communities, the overriding issue for this upcoming election is preventing Congress from limiting their rights any further, said Lindsay Church, executive director and co-founder of Minority Veterans of America.

Many minority veterans live in areas that are curtailing voting rights, and those veterans also now have fewer rights on bodily autonomy and reproductive health in the wake of the Supreme Court’s decision to overturn Roe v. Wade, Church told Task & Purpose.

“We really want to continue to see the disparity issues, the equity issues continue to be front of mind, but we know that should either of the chambers change control, the agenda for each of those committees will change drastically, and many of the rights that we fought for, that we just won – whether it be the VA removing its institutional abortion ban – we will see those types of things roll back and we’ll lose the hard-fought progress that we’ve won.”

Church also said that while other veterans groups may be hesitant to speak out about voting, reproductive, and other rights, these issues are of paramount importance to minority veterans this election.

“The issues of rights are top of mind for a lot of people, but for veterans specifically, there’s a unique moral injury to the experiences that veterans are having right now, wondering why they wore the uniform of a country that no longer believes that they’re full citizens – or never believed that they were full citizens,” Church said.