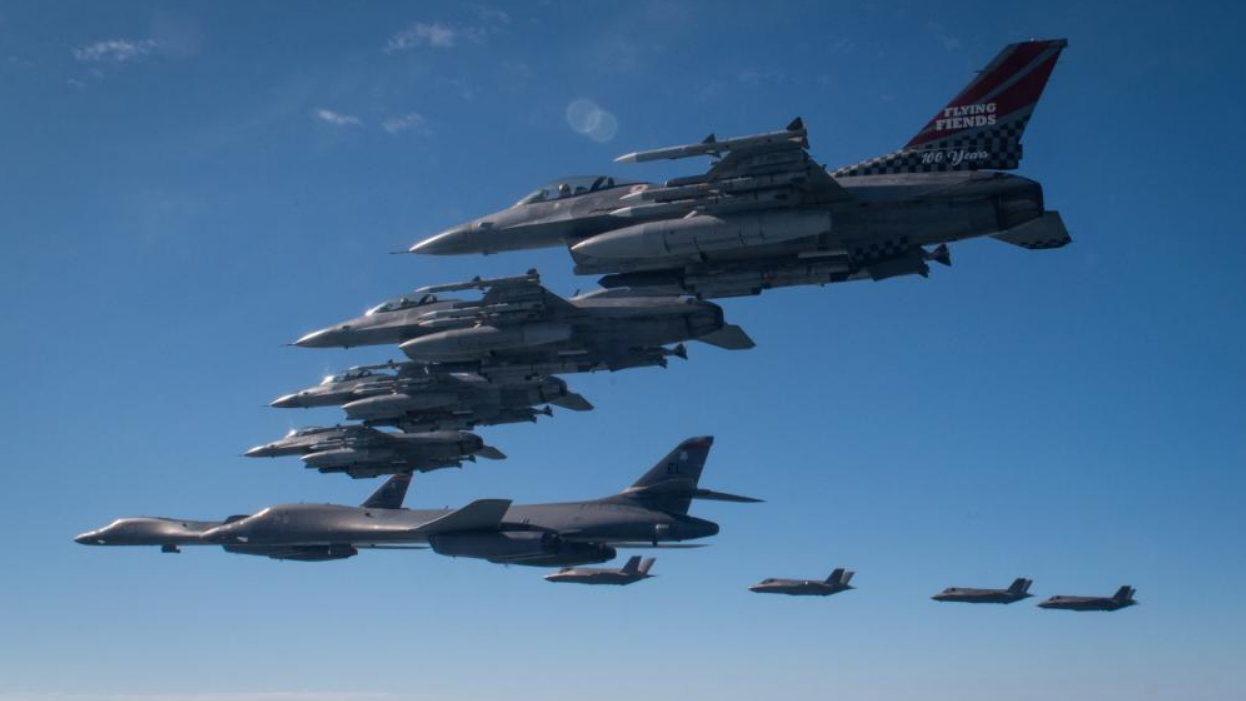 U.S. Air Force fighters jets plus two B-1B Lancer bombers joined South Korean jets in the sky today. It was the latest joint exercise and show of force between the two militaries this month, again following a new missile launch from North Korea.

The jets, F-16s from the 51st Fighter Wing, joined with South Korean F-35As in escorting a pair of American B-1B Lancer bombers today. The flight came after North Korea launched a long-range ballistic missile into Japanese waters on Friday, Nov. 18.

“The training demonstrated the ROK-US combined defense capability and posture based on the alliance’s overwhelming power and the U.S. ironclad commitment to providing extended deterrence in defense of the Korean Peninsula,” the Air Force said in a statement on the exercise.

The B-1B Lancer is distinctly not nuclear capable, however it can carry a payload of 125,000 total pounds of ordnance.

Friday’s test was the second this month of the ballistic missile. North Korean news outlet KCNA identified the intercontinental ballistic missile as a Hwaseong-17. North Korea claims the ICBM flew a total of 621 miles before hitting the water. North Korean leader Kim Jong Un was present at the missile launch on Friday, and unexpectedly joined in public by a girl identified by state media as one of his three children, who had not previously been seen.

Earlier this month, North Korea launched dozens of missiles in a three-day window, allegedly in response to a joint U.S.-South Korean exercise, “Vigilant Storm.” It featured a B-1B flying over South Korea as well, for the first time in five years. North Korea claimed those missile launches included ones designed to “mercilessly” hit South Korean and American bases. A first ICBM test on Nov. 3 failed, but the other missile launches were successful, showing the range and capabilities of the ordnance.

The ICBM test comes a day after North Korea launched a missile into the waters east of South Korea. Pyongyang also called out the United States for its military exercises with allies South Korea and Japan. North Korean Foreign Minister Choe Son Hui said at the time that “the U.S. will be well aware that it is gambling, for which it will certainly regret.”

The United States currently has approximately 28,000 troops in the Korean Peninsula, plus 54,000 nearby in Japan. The U.S. Air Force is currently in the process of phasing out older F-15 fighter jets at its Kadena Air Base in Japan’s southern island of Okinawa, to be replaced with more modern aircraft, to increase capabilities in the region.