For more than a week, the rumor wound its way through online networks of service members and veterans: Soldiers could... 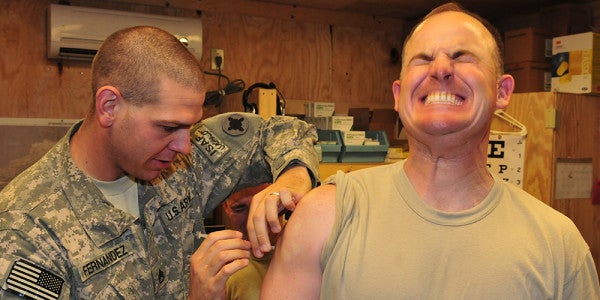 For more than a week, the rumor wound its way through online networks of service members and veterans: Soldiers could now claim a 100% disability from the Department of Veterans Affairs if they were given bad batches of the anthrax vaccine from 2001 to 2007.

That was according to an internal memo from an operational Army unit— a legit guidance, drafted April 10 by the 2nd Battalion, 35th Air Defense Artillery Brigade at Osan Air Base, South Korea. The memo was posted online and has caused quite the brouhaha on social media.

But while the 2/35 used information that it thought was accurate, the Army now says that memo was, to use a scientific term, bullshit.

“Defense Health Agency representatives have verified the information is false and completely without merit,” said Christina Wright, a spokeswoman for 8th Army in South Korea. “Once the brigade discovered the error, the correct information was published to their soldiers.”

A Pentagon spokeswoman confirmed to Task & Purpose that no bad batches of the anthrax vaccine were given to service members. More information was expected to be released later on Thursday.

The April 10 memo said soldiers in the battalion who were at Fort Drum, New York, and Fort Campbell, Kentucky, from 2001 to 2007 could have received bad batches of the anthrax vaccine before deploying in support of operations in Iraq and Afghanistan. Moreover, soldiers who were given the bad anthrax vaccine could receive a 100% disability rating from the VA, the memo said.

After several reporters asked the Army about the memo, Wright sent out a mass email on Wednesday night to set the record straight.

“The potential side effects of vaccines, including anthrax, are generally mild and temporary,” Wright said. “While the risk of serious harm is extremely small, there is a remote chance of a vaccine causing serious injury or death. In those rare cases, VA disability or death benefits may be granted.”