The Department of Defense recently released a report stating that only 1,366 cases of sexual harassment occurred in the military... 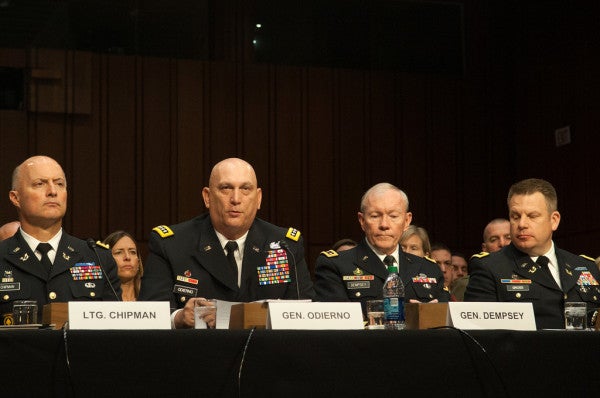 The Department of Defense recently released a report stating that only 1,366 cases of sexual harassment occurred in the military in fiscal year 2013. On the surface, this report is positively rosy — good news for a department that has been the subject of much congressional scrutiny in recent months. But language is a tricky thing, isn’t it?

Reports of sexual harassment may be down, but reports of sexual assault are up nearly 50% from FY2012. This information is present in the report, but buried beneath a headline and lead that hone in on the more positive story.

Just nine months ago, the DoD acknowledged that an estimated 26,000 sexual assaults occurred within its ranks during the previous year based on anonymous surveys, while only 3,600 were actually reported.

Something doesn’t add up.

Are we supposed to believe that for each crudely personal comment or groping hand, four people — half of them men — are raped out of the blue? Is the DoD seriously implying that thousands of sexual assaults happen in environments with almost zero tolerance for sexual harassment? It would seem so.

The DoD further fumbled when it attempted to frame sexual harassment as simply an issue of hurt feelings.

The official press release included this quote from an unnamed senior Defense Department official: “We want a climate where everybody reports whenever they’re offended.”

What if this nameless senior official had said, “We want a climate free of sexual harassment. We understand that the belief that you are entitled to repeatedly demand access to or comment on an unwilling person’s body not only breeds disrespect, but also negatively impacts trust, unit cohesion, morale, and our capacity to mete out justice when the situation escalates to sexual assault, as it often does.”

The task of assessing climate for an organization the size of the DoD is no doubt a challenging one, but the Defense Department’s carefully parsed approach to reporting the numbers is careless at best and disingenuous at worst.

Lydia Davey is an entrepreneur and U.S. Marine Veteran. She is the founder of Moriah Creatives Public Relations.