Russian weapons maker Kalashnikov Concern has unveiled what is being dubbed a “killer robot,” although it seems like it would... 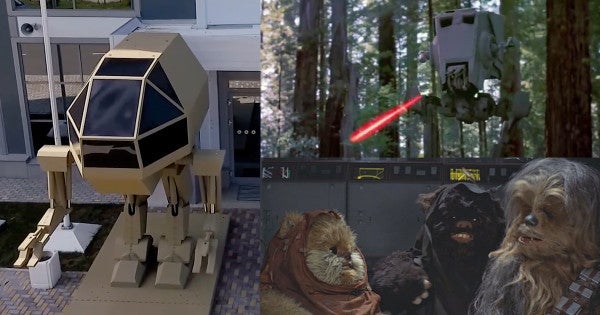 Russian weapons maker Kalashnikov Concern has unveiled what is being dubbed a “killer robot,” although it seems like it would be easily defeated by Ewoks if it's ever deployed to the far side of Endor.

In a video posted August 20 on the website of Kalashnikov — yes, that Kalashnikov — the company showed off what it called a “controllable bipedal complex.” That's Russian engineering speak for a 13-foot-tall vehicle that walks on two legs.

However, it's worth pointing out that the video doesn't show any movement. It just shows a static, gold-colored pod with fully-tinted windows that has two legs and two mechanical arms. Is it actually a vehicle that could be used on a battlefield, or a giant paperweight standing outside the Kalashnikov factory?

Still, the company claims the AT-ST Walker lookalike is bulletproof, weighs 4.5 tons, and can hold and move weapons in its arms, according to The Daily Mail.

The company did not say how the vehicle would fare against ropes or logs.