Marine veteran turned California Republican Rep. Duncan Hunter and his wife Margaret were indicted by a federal grand jury on... 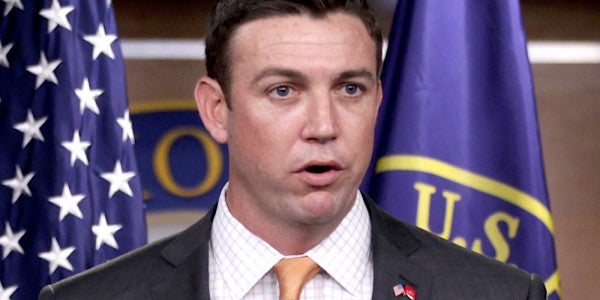 Marine veteran turned California Republican Rep. Duncan Hunter and his wife Margaret were indicted by a federal grand jury on Tuesday for using upwards of $250,000 in campaign funds for personal use — and, in at least one case, deliberately filed a false campaign expense report claiming certain items were meant for wounded veterans.

Are you fucking kidding me with this shit?

WHAT THE FUCKDuncan Hunter indictment

Hunter, who became a Marine officer after the September 11th attacks and has put the military and veterans community front and center in the course of his political career, should have known better, but his showboating on veterans issues since the San Diego Union-Tribune first raised these issues back in 2016 is, well, gross.

“Personally, I don’t care how it’s done, I just want to see it done,” Hunter said back in June of passing new legislation designed to benefit military families. “Our military families of fallen service members deserve better than politicians bickering over who should actually fix a problem which causes great harm.”

We wonder if that includes golf balls.

Read the full indictment below: