At least four American veterans were among a group of eight men arrested by police in Haiti earlier this week for driving without license plates and possessing an arsenal of weaponry and tactical gear. 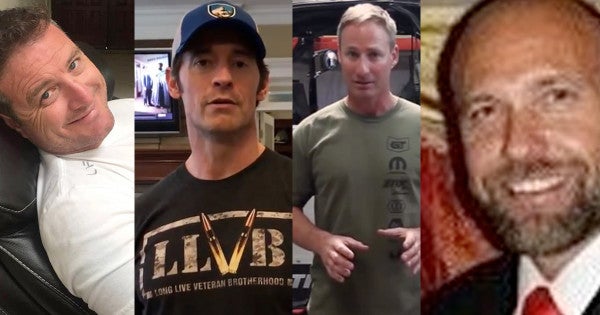 At least four American veterans were among a group of eight men arrested by police in Haiti earlier this week for allegedly driving without license plates and possessing an arsenal of weaponry and tactical gear.

Police in Port-au-Prince arrested five Americans, two Serbians, and one Haitian man at a police checkpoint on Sunday, according to The Miami-Herald. The men reportedly told police they were on a “government mission” but did not specify for which government, according to The Herald.

They also told police that “their boss was going to call their boss,” implying that someone high in Haiti's government would vouch for them and secure their release, Herald reporter Jacqueline Charles told NPR.

What they were actually doing or who they were potentially working for remains unclear. A State Department spokesperson told Task & Purpose they were aware that Haitian police arrested a “group of individuals, including some U.S. citizens,” but declined to answer whether the men were employed by or operating under contract with the U.S. government.

“When U.S. citizens are arrested overseas we seek consular access as soon as possible and provide appropriate consular assistance as provided by the Vienna Convention on Consular Relations,” the spokesperson said. “Due to privacy considerations, we are unable to comment further.”

The three others in the group were identified as Vlade Jankvic, 41, and Danilo Bajagic, 37, both Serbian nationals; and Michael Estera, 39, a Haitian citizen.

The group was stopped at a checkpoint while driving in two vehicles without license plates, according to the Herald, where police seized six rifles, six pistols, various knives, two drone aircraft, three satellite phones, documents, backpacks, tactical vests, and ammunition.

Among the weapons seized, according to photos taken by police, were five AR-15 rifles outfitted with flashlights and red-dot optics. Another AR-style rifle had a bipod, long-range scope, and looked like it was chambered in the higher caliber 7.62mm round. Five of the pistols were made by Glock, three of which bore numbers on the slides, according to one photo, a common way to mark and track weapons inside of armories. A sixth pistol seemed to be a Bersa-made TPR-series pistol.

Backgrounds on the men scoured from public records and open-source information show a wide range of military and law enforcement experience.

Chris Osman previously served as a U.S. Marine in combat in Somalia before becoming a Navy SEAL in 1998, according to his LinkedIn profile and the about page of the company he currently owns, Chris Osman Designs. “Chris performed in numerous classified operations in the Arabian Gulf, as well as combat in Afghanistan immediately after 9/11,” the page said.

Chris McKinley, who is listed as the founder and CEO of Invctvs Group — described as a “consortium of U.S. special operations veterans” that delivers “corporate team building services” — is a former Navy SEAL who served from 1996 to 2006, according to his LinkedIn profile. He later worked for private security firm Blackwater USA as a Physician Assistant under contract in support of operations in Afghanistan, Iraq, and North Africa. McKinley, then going by the last name Heben, was found not guilty in 2015 after being accused of fabricating a story about being shot in a grocery store parking lot in 2014 before driving himself to the hospital — which went viral on social media.

Kent Kroeker, who runs a company called Kroeker Off Road Engineering that specializes in truck suspension systems, is a former Marine Corps pilot with more than 20 years of service, according to a video interview with Red Bull. He's also a partner and chief operations officer with Kroeker Partners, where an about page says that “Kent served as a pilot and participated in ground operations in various capacities including Aircraft Commander, Forward Air Controller, Operations Officer, Anti-Terrorism/Force Protection Officer and Foreign Area Officer, eventually attaining the rank of Major before moving to the private sector.”

The firm's website has a message on the top saying it “has no active engagements underway in Haiti and is not in a position to offer comments on recent developments in the country.”

On his Linkedin profile, Talon Burton is listed as the director of high threat protection for Hawkstorm Global, LLC, a company that provides “elite services ranging from Emergency Response and Asset Protection to Security Consulting and Hostage Rescue,” according to its website. A phone message left with the company by Task & Purpose was not immediately returned.

Burton's previous experience includes service in Operation Desert Storm as a military policeman in the Army, service as a civilian police officer, and later on a personal security detail with the State Department, according to his LinkedIn profile. His profile also lists training courses he went through with Blackwater USA between 2004 and 2008.

It wasn't clear whether Dustin Porte had any military or law enforcement experience. Public records show he has been involved in a number of businesses registered in Louisiana, including Carrolton Services, LLC and Patriot Group Services, LLC. Phone messages left by Task & Purpose with both companies were not returned. A message left for Paul Lea, an attorney and registered agent for Patriot Group, was also not returned.

Danilo Bajagic is currently employed as a contractor with a firm called K17 Security, headquartered in Rockville, Maryland, a company spokesperson told Task & Purpose. The spokesperson said the firm engages in consulting, training, and physical security but said, “this not a K17 operation” in Haiti. “We do not do international work such as this.” Bajagic has been with the company for nearly seven years, according to his LinkedIn profile.

Very little information could be found on Vlade Jankvic or Michael Estera, although the Herald said police were following a lead on whether Estera had been deported from the U.S.

Haitian Prime Minister Jean-Henry Ceant told CNN the group were “mercenaries” seeking to “target the executive branch of the government,” though he did not offer specifics that supported the allegation.

UPDATE: Group of American vets detained in Haiti on weapons charges brought back to US, arrested upon landing