Trump’s Inauguration Started With A Bang, But Probably Not The One He Would’ve Liked

Flash bangs. Tear gas. A brick tossed through a police-car window. A burning limo. These aren’t what inauguration days are... 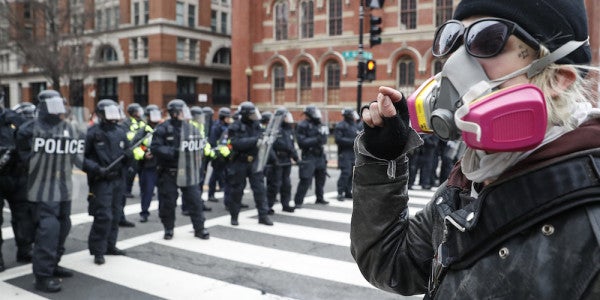 Flash bangs. Tear gas. A brick tossed through a police-car window. A burning limo. These aren’t what inauguration days are usually made of, but they’re just a selection of what broke out at demonstrations in downtown Washington, D.C., on Friday.

I arrived around 10:30 a.m. to find protests had already kicked off just south of the National Mall, where the swearing-in ceremony was taking place. The area around L’Enfant Plaza was largely dominated by a huge line of people hoping to get into the inauguration ceremony proper, while protesters set up shop along the mall. Iraq Veterans Against the War, for one, joined forces with other groups in their protest against the new president with energetic chants and bright signage. A Trump supporter shouted at the group. One went so far as to shout “MAGA” into my iPhone’s microphone while I interviewed a female veteran. And a Westboro Baptist Church-like group carried a line of hyper-offensive signs right down the street.

Bold? Yes. Surprising? Not so much, given the public’s supercharged emotions heading into the day, and the attitude of incitement that characterized much of the election season.

These crowds came to exercise their First Amendment rights to protest and no more. National Guardsmen and police lined the corners around the National Mall, but did not interfere with protests. Later in the day, though, in response to reports of rioting, I headed to the northwest quadrant of D.C. to see what was happening. A short subway ride away, I found myself in what is known as McPherson Square, a neighborhood about 12 blocks north of the National Mall. Near the subway station, musicians played joyfully. What seemed like a makeshift peace parade of protesters moved down the street. There were no visible conflicts between the National Guard and demonstrators. It was almost like there was nothing to worry about.

But more walking told another story. A few blocks away, police quietly donned riot gear and packed into unmarked vans destined for who knew where.

National Guardsmen stood in front of a line of windows reportedly shattered at a corner building during unrest earlier in the day.

Aside from the morning clash, Lt. Michael Doyle, an Army National Guardsmen from Jamaica, New York, told me how pleased he was with how the day had gone so far. He said people were happy to see the soldiers, and local restaurants were even handing out free food and coffee.

“We’re not down here to interject, we’re just down here to have people express their First Amendment rights and assist in a peaceful transition of power, which is what happened,” Doyle told me.

Further on, a few blocks down, protesters became more emboldened, unsatisfied with the lack of chaos they had wrought so far. A crowd of around about 200 brought traffic to a halt, filling a small park and most its surrounding streets until a combination of flash bangs, pepper spray, tear gas, and exhaustion caused the majority of the crowd to dissipate. Prior to the police offensive, officers were at the ready, in partial riot gear (white helmets and neon yellow jackets), based within the protest area — some just on foot and in line, others beside motorcycles — and also scattered around the protest’s perimeter. While running from the gas, I also spotted at least four on horseback.

Even after the gas, former presidential candidate Vermin Supreme — yes, the guy that campaigned with a boot on his head — led the crowd in song in an attempt to cheer people up and revive the protest spirit. Another protester knelt in the street and spoke to a line of police, trying to engage me nonviolent dialogue.

A protestor on his knees in the street, trying to dialogue peacefully with the police. pic.twitter.com/riQNt4yFEa

By around 2:15 p.m., protesters took to new levels of violence and vandalism. According to the crowd at the time (and later confirmed by VICE News), a brick was thrown through a police car window, prompting a brand-new choir of flash bangs and enough crowd panic that some protesters sought shelter in a halal restaurant. The D.C. police later issued a statement saying that two officers were injured by the same group responsible for the brick-throwing, calling them “coordinated attacks.”

By 4 p.m., well after the inauguration ceremony was over, igniting trash cans on fire evolved into igniting limousines. And the agitation was not without response: After being accosted by protesters, the driver of a black SUV drove his vehicle into a crowd of people after being unable to get past it for about two to three minutes. The crowd was equal parts upset (especially because many in the crowd yelled at the people attacking the vehicle to begin with to halt the tirade), shocked and angered.

How did it come to this?

According to a national security analyst at Friday’s protests who asked not to be named, the break from D.C.’s characteristically quiet protest status quo could partially be attributed to the participation of the Black Bloc.

A combination of anonymity (provided by black clothing and masked faces), a sense of inferred unity, and resistance-fueled adrenaline emboldens people who might not normally engage in bold acts of civil disobedience (i.e., breaking windows) to act out.

“Black bloc’ activists frequently take ‘advantage of the legitimate protesters to destroy things and emphasize their anarchist roots,” an FBI counterterrorism official told The Washington Post. “They’re basically anti-capitalists,” Gomez said. “They like to destroy or damage businesses that reflect their view of the world order.”

Overall, most of the people who showed up on Inauguration Day to protest aimed to do so peacefully, and what started a small contingent of instigators slowly grew of the course of the day as police and protesters clashed repeatedly. In a Friday-evening press conference, Metropolitan Police Department Chief Peter Newsham said at least 217 people were arrested in connection with inauguration-related activity. The police department also arrested a 34-year-old district resident and charged him with conspiracy to commit assault, also in connection with the day’s events. The heavy police presence and initially smaller clashes also drew the attention of a lot of media, which only added to the adrenaline of people who may not have planned to spend their day lighting shit on fire in front of The Washington Post headquarters.

The protests and violence of Inauguration Day set a very stark tone on the first day Trump's presidency; those people who do not agree with his policies and points of view are not going to spend the next four years quietly standing by. However, it's also clear there are always going to be extremist contingents eager to take advantage of that, encouraging people to burn the whole country to the ground.