New Hampshire State Rep. Al Baldasaro made national headlines July 20 when he said on “the Jeff Kuhner Show,” a... 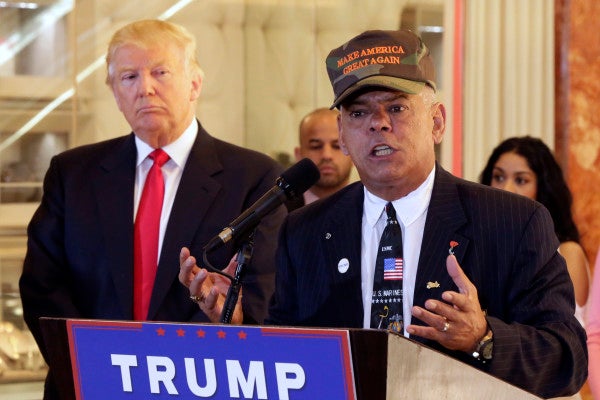 New Hampshire State Rep. Al Baldasaro made national headlines July 20 when he said on “the Jeff Kuhner Show,” a conservative radio program, that former Secretary of State Hillary Clinton “should be put in the firing line and shot for treason.”

Baldasaro is a retired Marine first sergeant and an advisor to the Donald Trump campaign on veterans issues.

In an interview later in the day with NH1, Baldasaro doubled down on his remarks.

“I’m a veteran. And any other veteran that had a server of classified information, people’s names and things like that, you’re putting other veterans life in danger, and state department workers, special forces, CIA or whatever, in danger,” Baldasaro said. “That’s treason. My military mind believes it’s treason. Once you’re found guilty, normally it’s a firing squad. You know that was just my opinion, I mean, as a veteran.”

Baldasaro also said, “I was a veteran long before I was a Republican and I stand by what I said and I’m not changing my views.”

But now, veteran leaders are uniting to condemn such rhetoric.

“In light of recent shooting incidents, this rhetoric is toxic and irresponsible,” Paul Rieckhoff, the founder and CEO of Iraq and Afghanistan Veterans of America, told Task & Purpose.

“Especially from a veteran leader,” Rieckhoff added. “No campaign should condone this.”

Republican Sen. Tom Cotton of Arkansas, a former Army Ranger who served in Iraq and Afghanistan, also condemned the remark in an interview with Jake Tapper on CNN.

“That’s not in keeping with the best traditions of American politics. We have opponents, we have adversaires, we don’t have enemies in American politics, though, so I can’t agree with that kind of rhetoric.”

When asked specifically by Tapper if he condemned the rhetoric, Cotton said, “That kind of rhetoric has no place in our politics.”

Task & Purpose also reached out to Bill Rausch, a U.S. Army vet and the executive director of Got Your 6, a nonprofit that works to foster accurate portrayals of veterans. Rauch is in Cleveland, Ohio, for the Republican National Convention.

“There's no place in politics for talk about putting your opponents in front of a firing squad,” Rausch said. “It goes against the ethos of every person who raised their right hand and swore to defend and protect the Constitution of the United States. We’re calling on the campaign to condemn it immediately.”

For its part, the Trump campaign, through its spokesperson Hope Hicks, told NH1, “We’re incredibly grateful for his support, but we don’t agree with his comments.”

The U.S. Secret Service, which provides protection to Clinton, is investigating Baldasaro after the remark, according to the Daily Beast.