I did laugh a few times, but it was never in the way that '68 Whiskey' intended. 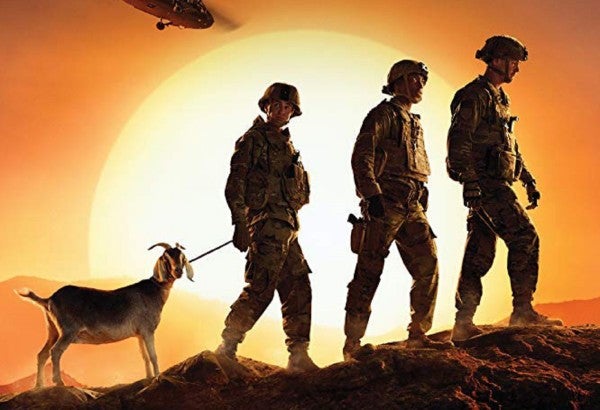 The new military show, 68 Whiskey, from Ron Howard’s Imagine Entertainment and CBS, bills itself as a dark comedy, and while I’ll admit that I did laugh a few times during an early screening of the show, it was never in the way that 68 Whiskey intended.

The series follows a small team of medics during their deployment to an austere outpost in Afghanistan, and that’s where 68 Whiskey’s ties to reality start and end.

Just a few minutes into the first episode, the show’s main character, Sgt. Cooper Roback (Sam Keeley), is getting his ass handed to him in a bare knuckle boxing match at the FOB, while his fellow medic, Staff Sgt. Melkhi Davis (Jeremy Tardy), roots for him ringside. Davis’ desperate support for Roback is less about his concern over Roback’s physical well-being, and has more to do with the fact that the two men bet a hefty sum of cash on the match.

It’s also worth noting that they’re both on duty, a point which is driven home minutes later when they respond to a call for a casualty evacuation. Roback and Davis are joined by Sgt. Rosa Alvarez (Cristina Rodlo) as they fly out to an Afghan village where a soldier has been shot. The casualty, Cpl. Buckley, was apparently wounded while running a “side hustle” to buy some Persian rugs. This is a recurring theme in 68 Whiskey’s first episode. Apparently everyone deployed to Afghanistan is so broke that they gamble nonstop, moonlight as Instagram models for firearm manufacturers (yes, that’s something one of the soldiers does), and sneak off-base all on their own to risk their necks buying furniture.

When the medics arrive, they’re without an escort, and quickly secure the perimeter with their 9mm pistols at the ready.

After triaging the wounded soldier, they discover another casualty, an Afghan who speaks multiple languages — this is apparently really important, because Roback can’t stop talking about it. Once the two casualties are loaded onto the Black Hawk, Davis decides to fill up a body bag with the rugs Buckley was acquiring to make up for the cash he and Roback lost during the implausible boxing match earlier in the show.

While on the helo, Roback is forced to hang outside of the Black Hawk as they fly back to base because they’re “at max capacity.” A UH-60 Black Hawk helicopter has a maximum carrying capacity of 11 combat troops in addition to three crew members. During this scene, there are only six people inside the helo: the pilot and copilot, Davis and Alvarez, the wounded soldier and the Afghan civilian. Roback is hooked up outside.

The only reason I can imagine that Roback was told to dangle from the helicopter was so he could have a “cool guy” moment, because treating a gunshot wound while zipping through the air just isn’t exciting enough for TV, I guess. Then, while treating Buckley for what appears to be a sucking chest wound, the medics, who are all NCOs who have clearly been in country for a while, fail to check for an exit wound, and he dies.

Keep in mind, we’re only 10 minutes in by this point.

Next, the show decides to include a “final roll call” during the memorial service for Buckley. It’s a rather solemn military tradition, and I was at first glad they decided to spotlight it. During the service, one of the characters, Pvt. Anthony Petrocelli, steps out of a small formation and declares that Buckley is “no longer with us,” while someone plays Taps from a bugle. Of the memorials I attended downrange, none of them played out quite this way.

They were somber affairs, with service members from across the base standing in formation, or at attention on the periphery if there simply wasn’t enough room. Anyone who could attend, did. What music we had was played from a cheap stereo, and the final roll call was never met with an answer, instead, the name, or names, of the dead were left to hang over us: a clear and tragic reminder that they would never again answer.

Look, I know these critiques may seem nitpicky, but when television shows repeatedly mess up on the minor details they send a message to viewers — particularly military ones — that getting those details right isn’t worth the time. And what’s even worse, is that after those shows are inevitably torn apart by critics, and veteran viewers, they may lead studio execs to conclude that making a series about our most recent conflicts isn’t worth the trouble. That would be tragic for those current and former service members who have something to contribute to this genre, whether it’s a career as a technical adviser, or a treatment for a show of their own.

That’s just one more reason why it’s important to get the little things right.

As for 68 Whiskey, it doesn’t. Instead, it feels like a sampler platter of cheap cliches and overused jargon that leans heavily on other works, like Catch-22, M*A*S*H or Three Kings. It’s also why I ditched it after the first episode, which ends with Roback and Davis doing a drug deal with a local Afghan leader, exchanging stolen medicine for a wooden crate full of hashish.

We’ve seen all this before with other procedural military shows, like CBS’ The Code, and frankly, I don’t see any need to sit through it again. Do yourself a favor, and don’t bother either when 68 Whiskey debuts on Jan. 15.