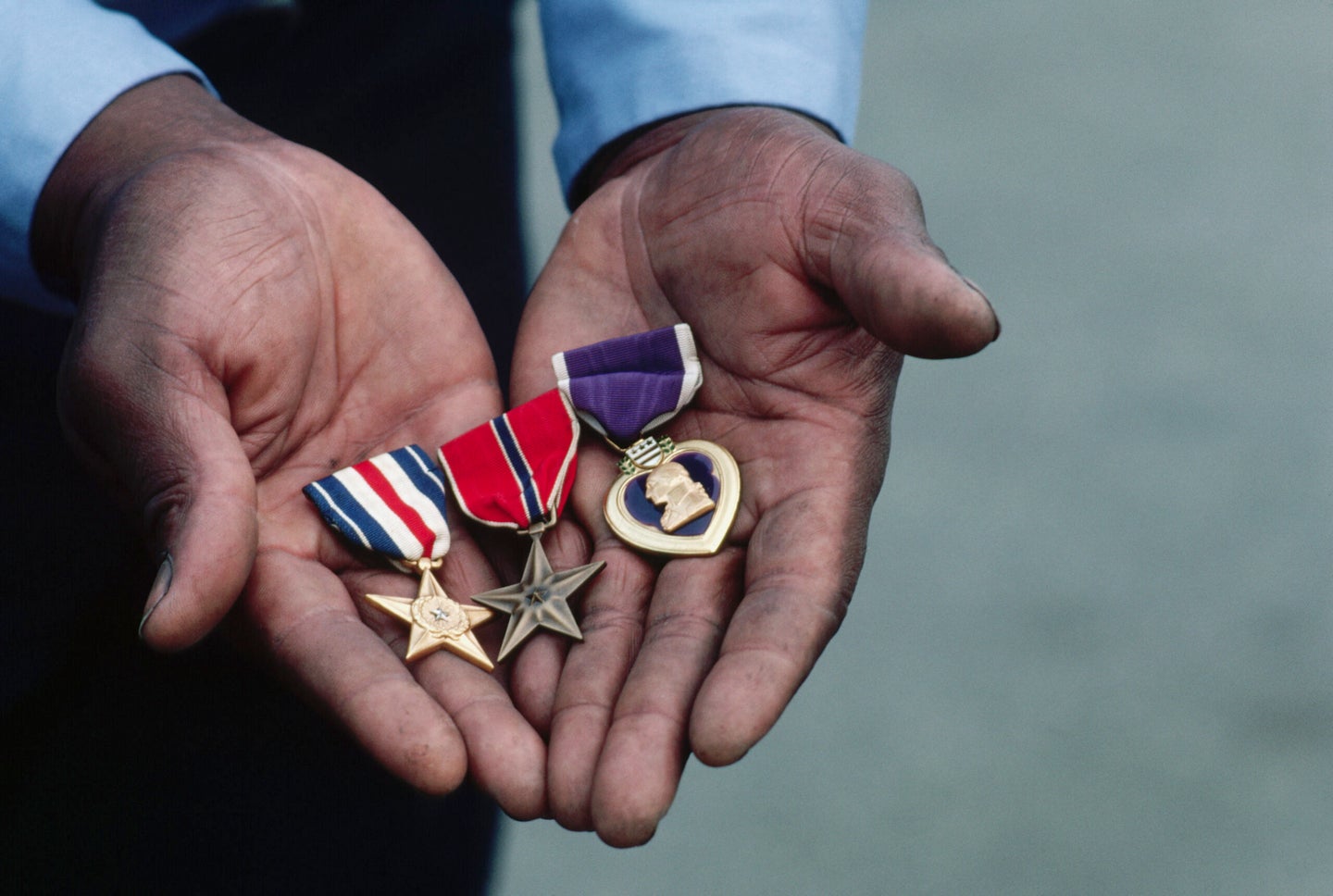 Frank Goins holds his military decorations earned for bravery in combat in Vietnam. The medals, from left to right, are: the Silver Star, the Bronze Star, and the Purple Heart. Goins served in the 1st Infantry Division, C Company, of the United States Army. (Photo by © Wally McNamee/CORBIS/Corbis via Getty Images).
SHARE

This Veterans Day will mark 10 months since Jan. 6, 2021, when Capitol police officer Eugene Goodman faced off against dozens of insurrectionists who had breached the building, mere feet away from the Senate Chamber. He successfully goaded and led them away to a location where other officers were waiting, a moment that was caught on video and led to him being awarded a Congressional Gold Medal.

Goodman, who is Black, served in the U.S. Army in Iraq with the 2nd Brigade of the 101st Airborne Division in the “Triangle of Death” (a unit in which I served in Iraq with 11 years later); on Jan. 6, insurrectionists hurled racial epithets at him and his fellow Black officers.

Eugene Goodman’s stand against the insurrectionists is yet another instance of Black Americans who have served their nation overseas having to fight another war upon returning home: the one against racism and discrimination. Groups across the nation are currently targeting the teaching or even acknowledgment of any instances in American history that deal with racial discrimination; in doing so they are also attempting to remove the history of what happened to Black service members who have sacrificed at both home and abroad.

If we truly want to honor our veterans this holiday then we must confront this history; the insurrectionists who were attacking Eugene Goodman considered him to not be a “true” American patriot even though he was performing in line with the oath he swore to protect the nation from enemies foreign and domestic.

Even now, amid the growing discussions around right-wing extremism in the military and racial justice, Black servicemembers have a per capita suicide rate that is three times higher than in Black Americans who are not serving (the number for Whites is also horrific, at twice their national average). Also, the posthumous Medal of Honor for Sgt. 1st Class Alwyn Cashe, a Black soldier who died of wounds sustained in 2005 when he walked into a burning Bradley Fighting Vehicle multiple times to save his men while drenched in gasoline and under fire, has still not been awarded. While the White House has had another Medal of Honor ceremony this year, there has been no word on why Cashe’s has been delayed. The allowance of such racist policies such as the filibuster, which was originally established to block anti-lynching bills, and voting restriction laws that specifically target minority voters is a disservice to the Black service members who fought for this country and their equal rights throughout its history.

The significance of the date of Nov. 11 for Veterans Day is that it signifies the end of World War I. More than 380,000 Black Americans joined the American Expeditionary Force during the conflict. Afterward, these Black veterans soon found themselves fighting for freedom at home during the “Red Summer of 1919”, where White citizens targeted Black Americans across the nation. Black WWI veterans were specifically targeted for lynchings and were seen as a threat because of their military service. In Chicago and Washington D.C., Black veterans were forced to fight back in defense of their homes and their rights, ultimately causing White rioters there to end their assaults.

Two years later in Oklahoma, the city of Tulsa was the site of a race massacre. A catalyst of the riot was when Black WWI veterans attempted to protect Dick Rowland from a White mob after he was accused of sexual assault. When a member of the mob attempted to disarm one of them, a shot was fired and the massacre began.

Twenty years later, over 1.2 million Black Americans served during World War II to fight against tyranny. Despite serving with distinction in such units as the famed Tuskegee Airmen in Europe, the 761st Tank Battalion, the 92nd Infantry Division in Italy, and in the Pacific as with the all-Black 11th Marine Depot and 7th Marine Ammunition Companies helping to repel a Japanese counterattack on Peleliu, it took over 50 years for any Black service members from the conflict to receive the Medal of Honor.

Upon returning home from WWII, Black veterans immediately faced discrimination in the form of not receiving their GI Bill benefits, housing redlining, and even attacks on themselves in their homes; in one instance, a local KKK organization wrote a letter to a Black veteran warning him that he would have been dead already if he had not served in the military. Many of these veterans immediately joined the fight for civil rights: the ranks of the NAACP swelled by over 400,000 new members by 1946.

Oliver Brown, the plaintiff in the famed Supreme Court Case Brown v. Board of Education, was a veteran of WWII. Jackie Robinson, the first Black man to play in the MLB in the 20th century, had been in the 761st Tank Battalion during the war but was prevented from going to Europe with them after he refused to sit in the back of the bus and faced disciplinary action for taking a stand against segregation. Hosea Williams, who was a top lieutenant to Dr. Martin Luther King Jr. in the 1960s, had been wounded in combat during WWII and was beaten, in uniform, upon his return home when trying to drink from a ”Whites Only” fountain; there are yet more whose service pushed them to participate in the struggle.

The experience of these Black veterans is the experience of the nation, and they are the experiences that some are trying to remove from the conversation. The whitewashing of American history stretches from the names of persons on photos, the non-acceptance of Black American scientific achievements, to the intentional amnesia around events such as the Tulsa riots, the Red Summer, or attempts to bring Jim Crow to England by White American troops during WWII. History is a powerful tool that creates cultural identities and power structures; it tells us why Black service members like Lt. Caron Nazario face discrimination and harassment while wearing the uniform of one of the most respected institutions in the nation, and how right-wing extremism enters the military’s ranks.

History also informs us why five service members who participated in the events of Jan. 6 as part of the mob that Eugene Goodman battled against are still serving in the military, even while Black service members face higher rates of court-martial in all four branches of the military compared to their White counterparts.

It also tells us what events not to repeat, and how to strive to make our nation better and honor those who sacrificed for it.

Daniel Johnson is a former infantry officer and journalist who served with the United States Army in Iraq, and is currently a Roy H. Park fellow at the Hussman School of Journalism and Media at UNC–Chapel Hill. He is the author of #Inherent Resolve, a book on his unit’s experience in the war against ISIS.