‘12 Strong’ Isn’t The Afghan War Movie We Deserve, But It’s The One We Want

The War on Terror has never looked so good. 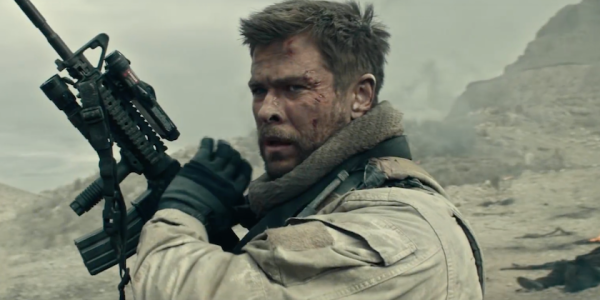 Long ago — before the War on Terror devolved into a game of whack-a-mole; before MRAPs, and IEDs, and ROEs, and PTSD, all that other mundane stuff — a small group of Green Berets rode into battle against America’s enemies in the most glorious way possible: on horseback. The year was 2001. The commandos, a 12-man team codenamed Operational Detachment Alpha 595, were the first U.S. troops on the ground in Afghanistan after the Sept. 11 terror attacks. For weeks, they galloped alongside a faction of the Northern Alliance and beat the britches off a much larger Taliban force. It was an extraordinary display of unconventional warfare. By mid-November, the Taliban had abandoned Kabul, and Osama Bin Laden was hightailing it to Tora Bora. Were the War on Terror a blockbuster Hollywood movie, the credits would probably start rolling right about there.

That movie debuts on Jan. 19. Starring Chris Hemsworth as Capt. Mitch Nelson, the leader of ODA 595, and Michael Shannon as his steely-eyed second-in-command, 12 Strong is being touted as “the declassified true story of the horse soldiers.” That’s a bit of an exaggeration. ODA 595’s mission in Afghanistan stopped being a secret on Nov. 16 2001, when then-secretary of defense Donald Rumsfeld showed reporters a photograph of a bearded commando on a horse and explained that the man was one of the Green Berets directing airstrikes against Taliban and al-Qaeda targets in northern Afghanistan. The soldiers’ tale was also told in Doug Stanton’s 2009 nonfiction book, Horse Soldiers, upon which the film is based — hence “true story.”

But did everything depicted in 12 Strong happen in real life? No, of course not. It’s a Hollywood film. (“This is a fictional portrayal — don’t lose sight of that,” the real-life “Nelson,” Mark Nutsch, told the Tampa Bay Times.) But more than that, it’s a Hollywood film about U.S. special operations.

As far as Hollywood is concerned, there are two versions of the War on Terror. One is a hopeless quagmire that has left an entire generation of military veterans psychologically traumatized. The other is a gallant romp fought by elite commandos. Moviegoers much prefer the latter. In terms of box office success, Zero Dark Thirty, American Sniper, and Lone Survivor — all heavily dramatized films exalting the awesomeness of Navy SEALs — top the list of movies about the wars in Iraq and Afghanistan by a very wide margin. Even Act of Valor, a film about Navy SEALs (played by actual Navy SEALs) that boasts a stunningly cruddy “25% fresh” on Rotten Tomatoes, outearned Kathryn Bigelow’s similarly budgeted The Hurt Locker — which won six Oscars, including for Best Picture — by more than $30 million. The numbers say it all: Critics like films that make us feel conflicted about our nation’s current wars; most people who pay to see films, however, don’t.

Related: The Army’s Guide To Waging War On Horseback Is Brilliant And Ridiculous >>

Epic gun battles; rock-hard muscles slathered in grease and human blood; explosions that send guys somersaulting like rag dolls through the air; a clear objective; an enemy that stands up and fights like a man; a grand finale: That’s what the people want. Aside from a handful of scandals and a few exhilarating moments that seemed pivotal at the time, but ultimately did little or nothing to move the ball forward, the War on Terror has been a bit of a snoozefest. 17 years on, all of the lives and dollars we’ve poured into Iraq and Afghanistan haven’t paid off the way they were supposed to. There’s been no “raising the flag on Iwo Jima” moment. No sooner had Bin Laden’s bullet-ridden corpse been consumed by the fishes than the Islamic State emerged. Iraq is still not a beacon of democracy, and the Taliban is thriving. But if you thought Hollywood couldn’t manage to squeeze at least one more Saving Private Ryan out of this quizzical little war, you’re clearly unfamiliar with the work of Jerry Bruckheimer.

What do Top Gun, Pearl Harbor, Black Hawk Down, all have common? Well, for one thing, they all star Hollywood hunks: Tom Cruise (Sexiest Man Alive 1990), Ben Affleck (Sexiest Man Alive 2002), Josh Hartnett (just a really handsome guy). They’re also all big-budget patriotic American war dramas produced by Bruckheimer. The famed producer’s latest project is cut from similar cloth. As 12 Strong’s Nelson, Hemsworth (Sexiest Man Alive 2014) does a fine job channeling his inner Thor to give audiences the sort of mythical, all-American pipe-hitter they love to see vanquishing terrorists on the filmic battlefield. And while not a single helmet makes an appearance in this film, the tactics are sound. A cadre of former and currently serving U.S. special operators — including Nutsch, who is retired — were involved in the production to ensure it passes the bullshit test in that regard, at least.

“From a technical standpoint, we had a checklist of things we wanted to make sure we did and didn’t do, especially the things that are telltale signs that it isn’t authentic, or that the military community would roll their eyes at,” Hemsworth told Task & Purpose in a recent phone interview. “Also, just working with these guys and getting a real sense of the type of person it takes to be in the military — to put yourself in harm’s way for the safety of other. It was inspiring and hugely motivating to get this story right and do the story justice.”

But why is this story important now? Why has the opening phase of the War on Terror — a war that has cost hundreds of thousands of lives, plunged the Middle East into a deeper state of perpetual chaos, and fueled the rise of radical Islam — been immortalized with a 16-foot bronze statue of a horseback commando looking over Ground Zero? Americans overwhelmingly supported military action against the perpetrators of 9/11. (“Our shared mission, to eradicate terrorism, is a noble one,” The New York Times editorial boardwrote five days after the attack. “The rewards for victory would be immense — a safer world and a planetary commitment to cooperation and tolerance.”) President George W. Bush made it explicitly clear from the start that we were in this for the long haul — “It will not end until every terrorist group of global reach has been found, stopped, and defeated,” hesaid on Sept. 20, 2001 — but I think most of us believed that the same military that had just pulled off a succession of lighting-fast victories against standing armies in Latin America, the Middle East, and the Balkans would make short work of the savage cave-dwellers who brought our towers down.

Bruckheimer has described Hollywood as “the transportation business.” The job of filmmakers, he said, is to “transport audiences from one place to another.” 12 Strong transports us to a reality in which America got its revenge. It’s a very short express ride, with no other stops.

I don’t typically like films about the War on Terror. Even the corniest depictions of soldiers being killed in combat or committing suicide make me cry like a baby. Maybe that has something to do with the fact that the version of the Afghan War I experienced, many years after ODA 595 and their local allies routed the Taliban from Mazar-i-Sharif, involved a lot of guts and very little glory.

Not a single American soldier dies in 12 Strong. Not once does a character throw up his hands and say, “What the fuck are we doing in this shithole country, anyways?” The mission is crystal clear. The battles are fought the way battles are supposed to be fought: with tanks, and artillery, and honor, and opposing armies clashing across distinct battlelines. There are no civilians to hide behind. Every bullet fired, every grenade thrown, every 500-pound bomb dropped from the sky hits a combatant.

And there a lot of bombs. We see them fall and explode from every angle. Director Nicolai Fuglsig covered the Kosovo conflict as a photojournalist and documentarian. He has a keen eye for the beauty of combat. The War on Terror has never looked so good. You should see it.