In early 2006, as the NATO International Security Assistance Force ramped up operations in southern Afghanistan, and clashes between coalition … Continued 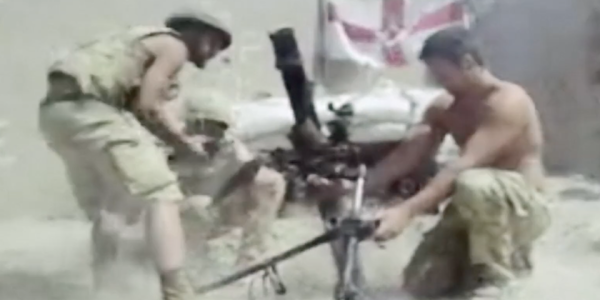 In early 2006, as the NATO International Security Assistance Force ramped up operations in southern Afghanistan, and clashes between coalition soldiers and insurgents intensified, it became increasingly clear that a Taliban resurgence was fully underway. But the British military, tasked with leading the charge in Afghanistan’s restive Helmand province, remained confident in its ability to bring the area under control through a counterinsurgency campaign focused less on taking the fight to the Taliban and more on building up Afghan forces and nurturing strategic relationships with locals in the enemy’s spiritual heartland.

“We would be perfectly happy to leave [Helmand] in three years without firing one shot,” then British Defence Secretary John Reid said during a visit to the country in April 2006.

Several months later, 88 soldiers with Easy Company — a mix of Paratroopers and the Royal Irish — were thrust into one of the fiercest engagements of the conflict. The so-called “Siege of Musa Qala” pitted Easy Company against an estimated force of 500 heavily armed insurgents in a battle that lasted more than 50 days and ended only after locals brokered an unlikely ceasefire between the Brits and the Taliban. By the time Easy Company was extracted from Musa Qala, three British soldiers were dead, 12 more were badly wounded, and, according to the Daily Mail, a quarter of the British Army’s Afghanistan ammunition for that year was spent.

For years, details of the battle were kept closely guarded by the British Ministry of Defense, but a documentary team was able to stitch together the story through interviews with some of the men who survived the siege (active duty soldiers were apparently prohibited from being interviewed). From those interviews, it’s clear that the men of Easy Company were in constant fear of being overrun. “It came to a point I actually thought I was going to have a nervous breakdown,” one of them said. In fact, while the Taliban benefited from numerous resupplies and the fact that Easy Company was hunkered down in a remote, low-walled compound, the Brits never received reinforcements during the entire 56-day engagement and air support was extremely limited.

The documentary, entitled “Heroes of Helmand: The British Army’s Great Escape,” premieres on August 16 on Britain’s Channel 4, and includes raw combat from the battle. Take a look at the trailer. This is going to be intense.

Heroes of Helmand from Testimony Films on Vimeo.