The Army’s Stryker-mounted laser, built to zap enemy drones out of the sky, just took a major step towards combat.... 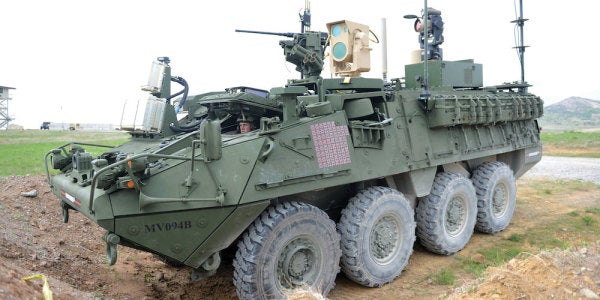 The Army’s Stryker-mounted laser, built to zap enemy drones out of the sky, just took a major step towards combat.

Artillery soldiers with the 2nd Cavalry Regiment are currently getting intensive training on how to laser-blast drones out of the sky to field-test specially modified Stryker Infantry Carrier Vehicles outfitted with a Mobile Experimental High Energy Laser at the Grafenwoehr Training Area in Germany in recent weeks. The training comes less than a year after the Stryker-equipped MEHEL was unveiled during a field test at Fort Sill, Oklahoma, and is believed to mark the first practical deployment of laser weaponry by infantry soldiers overseas.

While the 5kW laser system isn’t quite strong enough to incinerate enemy fighters, it’s a big improvement over last year’s test at Ft. Sill, which wowed with a 2kW rig. It’s also big step towards both the Army’s $118 million goal of fielding a 50kW laser as part of short-range air defense systems (SHORAD) in the next five years, and the Space and Missile Defense Command’s long-term moonshot goal of a 100kW death ray — projects that make up just a small part of the Pentagon’s directed energy aspirations.

The Army has been promotingthe living shit out of its nifty new laser trucks, but the location of the new training in Germany is most intriguing. Ever since U.S. Army Europe identified a major SHORAD gap in Eastern Europe after Russia’s 2014 annexation of Crimea, the Pentagon has been racing to deploy upgunned combat vehicles to NATO countries as part of Operation Atlantic Resolve.

Indeed, the 2nd Cav that’s testing the MEHEL system was also the first to receive 80 new Stryker ICVs rocking the 30mm cannon, plus an additional 87 Strykers with the CROWS-J Javelin system, to minimize troop exposure to enemy fire.

Where the Pentagon once envisioned the Stryker MEHEL downrange in Iraq and Syria to counter the “flying IEDs” and explosive-laden drones born from ISIS’s frightening “industrial revolution in terrorism,” the blows to the terror network in urban strongholds like Mosul and Raqqa, and the recentering of the U.S. military’s global footprint, means the future of laser warfare may be conventional, waged in the crowded skies above a battlespace.

One of the drones shot down by a MEHEL-equipped Stryker in April at Fort Sill during MFIX-17.U.S. Army/Monica K. Guthrie

To that end, the MEHEL won’t be the only new Stryker soldiers enjoy in the coming months: The Army is also eyeing the fledgling Stryker Maneuver SHORAD Launcher, or Stryker MSL, outfitted with an Avenger launcher turret that hosts an arsenal of AGM-114 Hellfire missiles.

But in the meantime, those lucky 2nd Cav soldiers will just have to spent their spare time — as Army officials said during the MEHEL test at Fort Sill last year — “absolutely lots of stuff up” with lasers.