And it looks amazing. 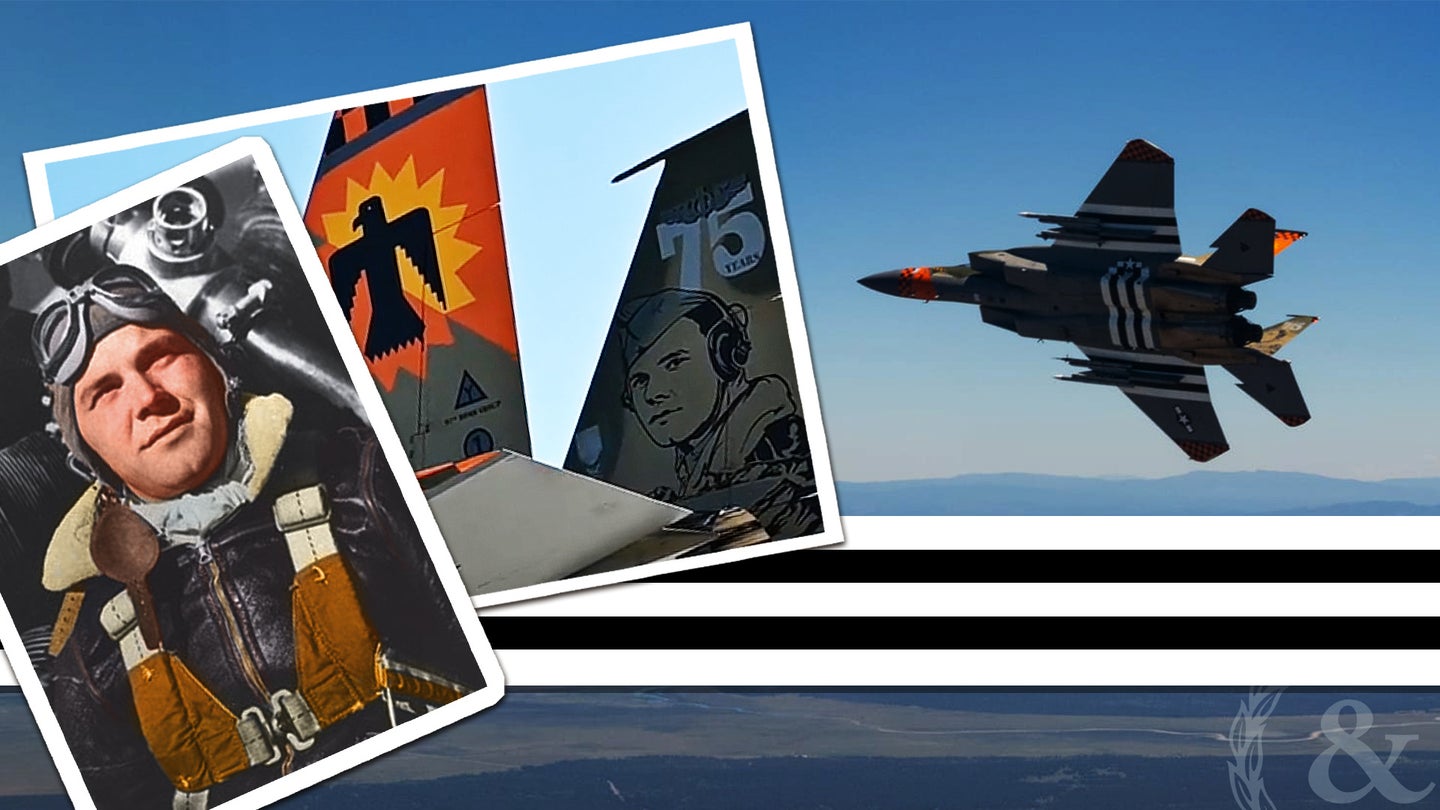 This is one slick looking F-15 Eagle.

On June 23, 1944, Kinglsey was serving as the bombardier of a B-17 on a mission over the Romanian oil fields at Ploesti. During the raid, Kingsley’s aircraft was heavily damaged and the tail gunner, Michael J. Sullivan, was wounded. Kingsley administered first aid to Sullivan and another wounded crewmember as the badly damaged B-17 lost altitude. The pilot eventually gave the order to bail out, but Sullivan’s parachute had been damaged, at which point Kingsley removed his own chute and strapped in onto the wounded man. Kingsley then remained with the aircraft until it crashed.

The F-15’s paint scheme was unveiled in 2019, 75 years after Kinglsey’s death. Kinglsey’s portrait, set over Oregon’s Crater Lake, is stenciled on the tail. The rest of the paint scheme is also reflective of the Army Air Corps of Kingsley’s day. The mottled greens and browns are similar to those many B-17s had, and the F-15’s wings are also painted with the distinctive black and white “invasion stripes” that were meant to denote allied aircraft. The nose is also stenciled with art from the squadron and group that Kingsley flew with.

At the unveiling in 2019, the 173rd Fighter Wing’s commander, Col. Jeffrey Edwards, read from a letter Sullivan had written to Kingsley’s oldest surviving brother in 1945.

“‘Tommy, I am more than grateful that my life was spared by your brother Dave giving up his life so that I could live,’” read Edwards. “’I am not ashamed to admit when I think of Dave I also have tears come into my eyes, if it weren’t for me getting wounded Dave’s life would have been saved.’”

Born in Portland, Oregon, Kingsley grew up there and worked as a firefighter before enlisting in April, 1942. Commissioned a year later, he was eventually assigned as a bombardier in the 97th Bomb Group.

“‘lots of flak—got a piece in the nose and missed me by two inches it seemed like it was glass off the nose, then I come to the wing-fast and a piece hit me on the hand—the pain did not stay with me,’” read Edwards.

Kinglsey was flying his 20th mission when he was killed two months later. The Medal of Honor was presented to his family the following April.

The Air Force has no shortage of interesting and unique paint schemes for some of its aircraft, and this one can certainly take its place on the list.

The Medal of Honor citation for  2nd Lt. David R. Kingsley can be read in its entirety below:

For conspicuous gallantry and intrepidity in action at the risk of life above and beyond the call of duty, 23 June 1944 near Ploesti, Rumania, while flying as bombardier of a B-17 type aircraft. On the bomb run 2d Lt. Kingsley’s aircraft was severely damaged by intense flak and forced to drop out of formation, but the pilot proceeded over the target and 2d Lt. Kingsley successfully dropped his bombs, causing severe damage to vital installations. The damaged aircraft, forced to lose altitude and to lag behind the formation, was aggressively attacked by three ME-109 aircraft, causing more damage to the aircraft and severely wounding the tail gunner in the upper arm. The radio operator and engineer notified 2d Lt. Kingsley that the tail gunner had been wounded and that assistance was needed to check the bleeding. Second Lt. Kingsley made his way back to the radio room, skillfully applied first aid to the wound, and succeeded in checking the bleeding. The tail gunner’s parachute harness and heavy clothes were removed and he was covered with blankets, making him as comfortable as possible. Eight ME-109 aircraft again aggressively attacked 2d Lt. Kingsley’s aircraft and the ball turret gunner was wounded by 20-mm shell fragments. He went forward to the radio room to have 2d Lt. Kingsley administer first aid. A few minutes later when the pilot gave the order to prepare to bail out, 2d Lt. Kingsley immediately began to assist the wounded gunners in putting on their parachute harness. In the confusion, the tail gunner’s harness, believed to have been damaged, could not be located in the bundle of blankets and flying clothes which had been removed from the wounded men. With utter disregard for his own means of escape, 2d Lt. Kingsley unhesitatingly removed his parachute harness and adjusted it to the wounded tail gunner. Due to the extensive damage caused by the accurate and concentrated 20-mm fire by the enemy aircraft the pilot gave the order to bail out, as it appeared that the aircraft would disintegrate at any moment. Second Lt. Kingsley aided the wounded men in bailing out and when last seen by the crewmembers he was standing on the bomb bay catwalk. The aircraft continued to fly on automatic pilot for a short distance, then crashed and burned. His body was later found in the wreckage. Second Lt. Kingsley by his gallant and heroic action was directly responsible for saving the life of the wounded gunner.