Vice President Mike Pence is a very special man. He considers his face both a tool of diplomacy and a … Continued 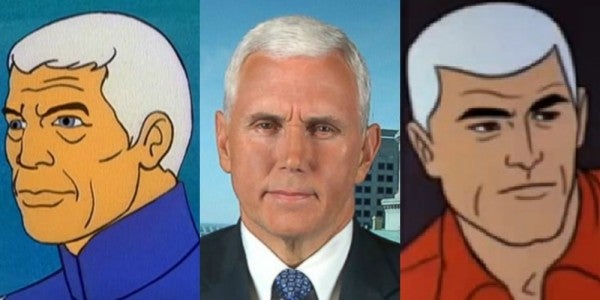 Vice President Mike Pence is a very special man. He considers his face both a tool of diplomacy and a weapon of intimidation. He doesn’t consort with random harlots. And he calls his wife, Karen, “mother” — often.

But Pence has another special attribute: He resembles more fictional characters than I’ve ever seen — and they’re all veterans. Though Pence never served, he sure looks like a lot of people who did, sort of!

Before he was the veteran bodyguard to Dr. Benton Quest (and his titular son Johnny), Race Bannon was Roger Tiberius Bannon, born in 1932 in Wilmette, Illinois. In 1951, he lied about his age to join the Navy, serving four years as a SEAL. Yes, this is all canon, and the resemblance that Pence bears to the swaggering action man has been well documented.

Murphy, inspired by Bannon, has an unclear association with the U.S. armed forces, as does everything else in the two series. But bonus points: Voice actor John Stephenson, the throat behind Murphy’s distinctive rasp, was a gunner and radio operator in the Air Force in World War II.

Cotton Hill from “King Of The Hill”

The caustic and obscene father of Hank Hill claimed to have killed “fitty men” in the Pacific theater during World War II, and he spent the entire series regaling everyone who would listen about losing his shins to a Japanese machine gun:

I was 14, just a little older than Bobby. But I knew Uncle Sam needed me, so I lied and signed up. We had beat the Nazzys in Italy, and they shipped me to the Pacific theater. A Tojo torpedo sent our troop ship to the bottom. I could only save three of my buddies: Fatty, Stinky, and Brooklyn. Out of the sun came a Tojo Zero and put fitty bullets in my back. The blood attracted sharks. I had to give 'em Fatty. Then things took a turn for the worse. I made it to an island, but it was full of Tojos! They were spitting on the U.S. flag! So I rushed 'em, but it was a trap. They opened fire and blew my shins off. Last thing I remember, I beat 'em all to death with a big piece of Fatty. I woke up in a field hospital, and they were sewing my feet to my knees.

Hill was awarded the Medal of Honor, Purple Heart, and American Campaign Medal for his valor.

The resemblance is uncanny, even if the fictional Duke’s, uh, biography is ridiculously detailed:

Duke is the code name of First Sergeant Conrad S. Hauser, and was born in St. Louis, Missouri. He is a skilled polyglot, being fluent in English, French and German, as well as several Southeast Asian languages. He was at the top of his class at Fort Benning, attended U.S. Army Special Language school, has undergone Special Forces training, and worked with South Vietnamese tribesmen. He was also an instructor in four different Special Forces schools. Despite his accomplishments, he has repeatedly turned down any officer commissions offered to him. He believes a commander's place is with his troops, not behind the battle lines.

If we’re being honest. ‘Duke’ is a way cooler nickname than Pence’s ‘Hoosier.’

Few people know that the legendary funnyman joined the Royal Canadian Air Force after he was 17, but everyone knows that the Canadian military isn’t real, which, when taken with his cartoonish character, relegates his veteran status to “imaginary.”

Sorry, Leslie — looks like you’ll have to just wish us luck: