Get Vets On Sets: Boot Camp For Filmmakers

Film schools and training programs often neglect the gritty business side of the film industry. Luckily for veterans, filmmakers, and... 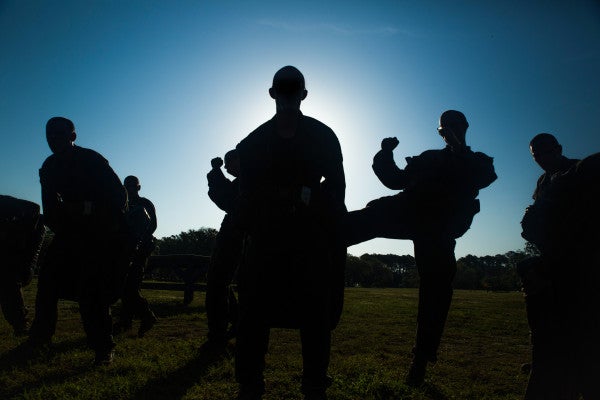 Film schools and training programs often neglect the gritty business side of the film industry. Luckily for veterans, filmmakers, and local artists, the 2014 GI Film Festival presented about a semester's worth of information on finance, marketing, and distribution from experts working in the field at the Filmmaker Boot Camp May 23 in Alexandria, Virginia.

Presenters included actors, producers, investment advisors, film festival organizers, and former service members. With the wide variety of experts sharing their knowledge, attendees found something of value no matter their focus on filmmaking.

“For me, personally, Matt Battaglia took my flash drive with my script on it,” said David Brock, whose screenplay “Christmas Leave” won Best Original Screenplay at the 2014 GIFF.

Brock, a former Green Beret, Army chaplain, and retired Evangelical Lutheran Church in America pastor with 32 years of military service, noted that veterans face the same challenges as everyone trying to find entry into the film world. “It's a hard field to break into, but if you write what you know, you'll have a universal result.”

Another recurring theme was the need for filmmakers to do proper market research, know who their film is intended for, and make smart business decisions.

“Know your audience,” said Brian Iglesias, Marine officer and director of the Korean documentary “Chosin.” He explained that when he was distributing his film, he decided not to choose an option that would have made it available in certain mainstream outlets. “People don't go to Wal-Mart to buy obscure Korean war movies.”

For Navy Petty Officer 1st Class V.T. Lithyouvong, a jet engine mechanic stationed in Whidbey, Washington, the focus on the business aspect of the film industry was eye-opening.

“It was good information,” said Lithyouvong, who executive produced and directed the music video “Barstool Kind of Night.” “The challenge is going from the military which is not profit-based work … The profit of the military is to protect and defend.”

Iglesias, along with other presenters, stressed the need to begin with a good idea.

“You have to start with a great story,” said Iglesias. He then added that you should also have exclusivity and a market for that story. For the “Chosin” project, he obtained the rights to the life stories of a large number of the Korean war veterans depicted in the film, and beat another Korean War-themed documentary to the market, to which he attributed a good amount of the film's final success.

The Virginia Film Office, the state organization that encourages filmmaking within its borders, actively seeks to develop a homegrown cadre of skilled film crew members who can be available to work on film sets, thus lowering the cost of out of town productions, according to Andy Edmunds, director of the VFO.

One of the goals of the workforce development project is to “get vets on sets,” said Edmunds. Service members understand concepts like hierarchy and timelines, and could provide a large talent pool to the film industry. The VFO recently met with the head of the Virginia community college system to investigate opportunities to offer film training programs at that level, which would then be open to veterans attending school.

Above all, the presenters stressed the necessity to keep working, find or create good material, understand the business side of the industry, and network when and wherever possible.

“There is no magic bullet,” said Ron Newcomb, a former Marine and police officer who hosted the boot camp. “It's a difficult, challenging road.”